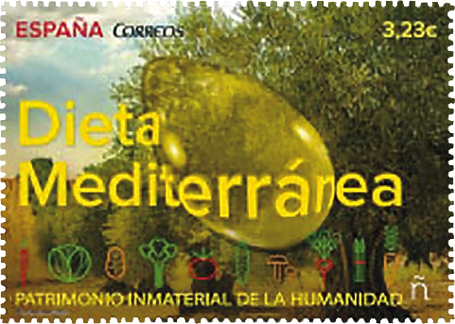 A stamp from Spain emphasizes the importance of olive oil in the Mediterranean diet and includes a drop of it. 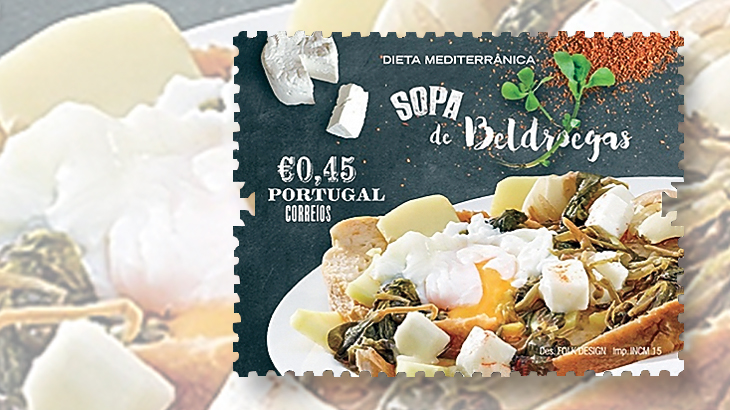 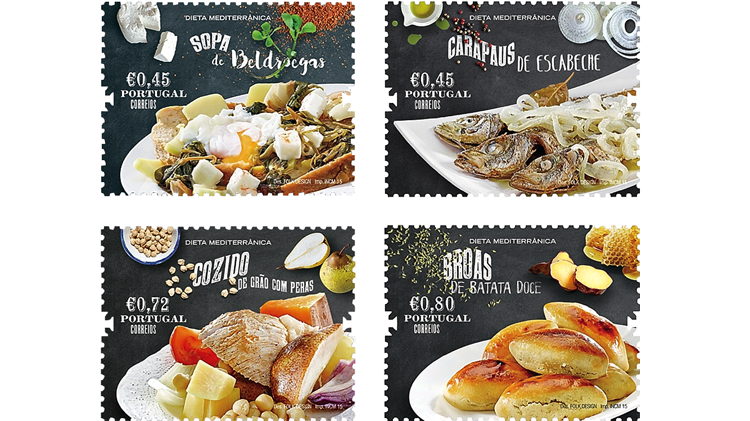 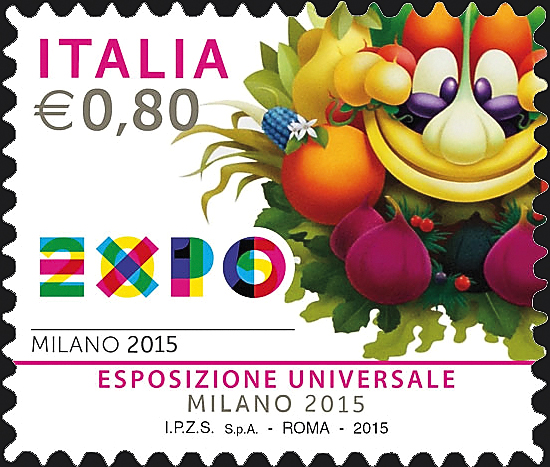 A stamp from Italy features Foody, the mascot for the Expo Milano 2015 world’s fair. 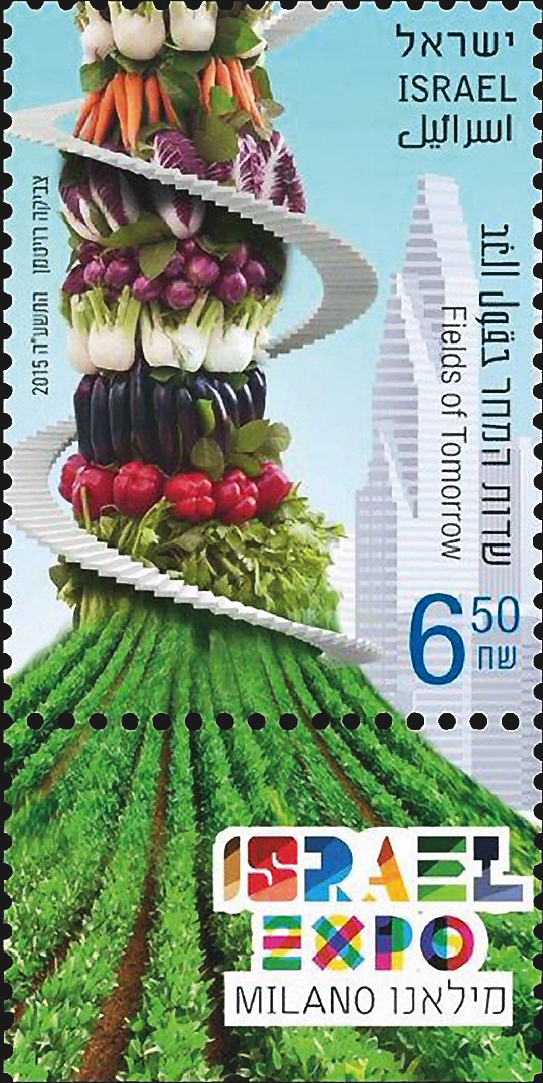 A stamp from Israel represents the “Fields of Tomorrow” theme of that nation’s pavilion at Expo Milano 2015. 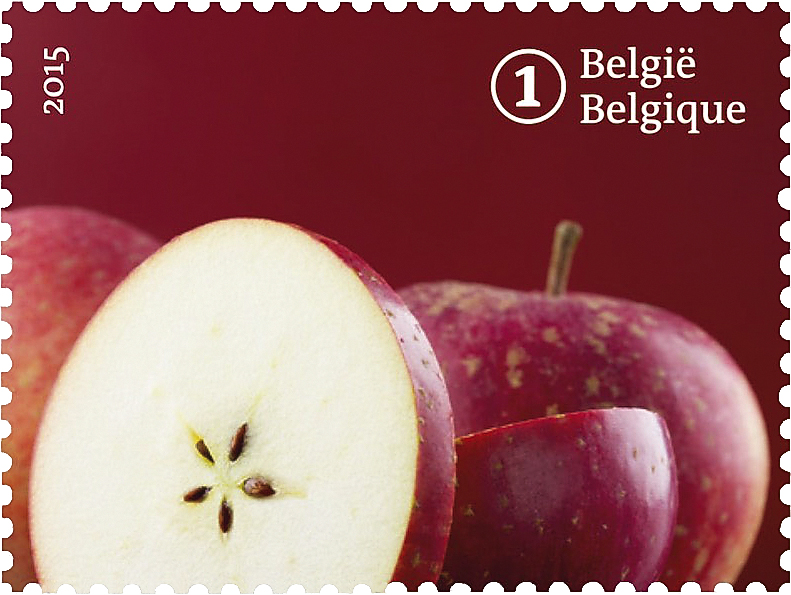 The reinette etoilee variety of apple is shown on a new stamp from Belgium. 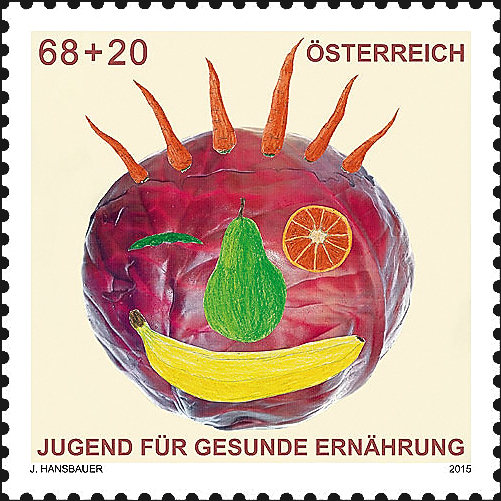 Portugal and Spain issued stamps in July featuring the Mediterranean diet, not necessarily as a means to lose weight, but as part of their cultural heritage.

In 2010, the Mediterranean diet was inscribed on UNESCO’s List of the Intangible Cultural Heritage of Humanity for the countries of Greece, Italy, Morocco and Spain. Portugal, Croatia and Cyprus were added to this list in 2013.

The July 20 issue from Portugal includes four stamps and a souvenir sheet.

In announcing these stamps, Portugal’s CTT mentions the UNESCO classification, as well as some of the health benefits of a diet based on vegetable fats, particularly olive oil, as opposed to animal fats.

The stamps depict dishes from the Algarve and Alentejo regions of Portugal.

Two of the stamps feature seafood: One of the two 0.45 stamps shows pickled horse mackerel, and the 1.80 stamp in the souvenir sheet pictures octopus stew. The ingredients for the stew are listed and illustrated in the selvage.

Another stew, made with chickpeas and pears, is pictured on the 0.72 stamp. The other 0.45 stamp features sopa de  Beldroegas, a soup made with purslane (Portulaca oleracea), which is considered a weed in the United States.

For something sweet, broas de batata doce, sweet potato scones, are pictured on the 0.80 stamp.

Portugal’s Mediterranean Diet stamps and souvenir sheet were designed by Folk Design, using photographs of the food. Imprensa Nacional-Casa da Moeda printed them by offset. The stamps are in separate sheets of 50.

Spain’s Mediterranean Diet stamp is one of two issued July 28 honoring items on the Intangible Cultural Heritage List. The design of this 3.23 stamp emphasizes the importance of olive oil, showing both a grove of olive trees and a drop of olive oil. Correos describes the latter as “an embossed drop of olive oil printed with varnish, simulating its texture and oleaginous appearance.”

Also included in the design are small line drawings of vegetables and what looks like a mushroom right above the inscription “Patrimonio Inmaterial de la Humanidad” (intangible heritage).

Correos does not identify these vegetables, but the shapes of broccoli, asparagus and a carrot are easily recognized.

The new-issue announcement says, “The [Mediterranean] diet is based mainly on the consumption of fruit, vegetables, legumes, grains, nuts and olive oil, all of which can be found in the Mediterranean area.”

The other stamp in the set, a 2.84 denomination, features the Silbo Gomero language. This whistled language, from La Gomera in the Canary Islands, was inscribed on the UNESCO list in 2009.

The inscription reads in part: “ ... Handed down over centuries from master to pupil, it is the only whistled language in the world that is fully developed and practised by a large community (more than 22,000 inhabitants). The whistled language replaces each vowel or consonant with a whistling sound: two distinct whistles replace the five Spanish vowels, and there are four whistles for consonants. The whistles can be distinguished according to pitch and whether they are interrupted or continuous. With practice, whistlers can convey any message. ...”

The stamp also includes an embedded code that links through a smartphone to a video featuring the language.

The Mediterranean Diet stamp is one of several stamps issued by Spain this year to feature food.

Cuisine is among the items represented on Tourism stamps issued Jan. 2. A souvenir sheet of two issued Jan. 28 celebrates Vitoria-Gasteiz as the capital of Spanish gastronomy. Peppers and mussels of Galaicia are featured on two stamps in a souvenir sheet to be released Sept. 25.

Also, a map made of seeds is pictured on a stamp issued June 4 to honor the World Food Programme, and wheat, apples and other fruits and vegetables are included in the design of the International Year of Soils stamp issued June 26.

Jackob Hansbauer, a 14-year-old stamp collector, won the competition to design an Austria semipostal stamp with the theme of “young people for a healthy diet.”

His design shows a head made from a cabbage, with carrots for hair, a banana for the mouth, a pear for the nose, an orange slice for one eye, and a pea pod for the other.

In an interview for Austria Post’s Die Briefmarke magazine for collectors, Hansbauer told Sybille Pudek, head of the youth department of the Federation of Austrian Philately Associations, that the idea behind his design was to “generate an appetite for fruit and vegetables.”

Issued June 3, the stamp is denominated 0.68 with a surtax of 0.20 to be used by the federation for its work promoting stamp collecting to children, including school programs.

The Austrian Government Printing Office printed the semipostal by offset in sheets of 50.

Another face made from healthy foods is featured on a stamp issued by Italy July 3 to promote Expo Milano 2015. Milan is hosting this world fair with the theme “Feeding the Planet, Energy for Life.” It opened May 1 and will run through Oct. 31.

The face belongs to Foody, the exposition’s official mascot.

The website for Expo Milano 2015 describes Foody as “honest, wise, respectful and a real fan of healthy, tasty food. Foody also stands for community, diversity and food in the broadest sense, as a source of life and energy. ... ”

Also on July 3, Italy issued a pane of 15 0.80 stamps showing images of a fish, a stag, a nut and various vegetables from Giovanni Tatti’s 1560 book Della Agricolture (Of Agriculture).

Each stamp includes the expo logo and emblem.

The Italian State Polygraphic Institute printed both issues by the gravure process. The stamp showing Foody is in sheets of 70.

A tower of vegetables is shown on a stamp from Israel commemorating the expo in Milan. This 6.50-shekel stamp is inscribed “Fields of Tomorrow,” the theme of Israel’s pavilion at the expo, on the right side.

The expo’s logo is shown on the label, or tab, attached to the stamp.

Zvika Roitman designed this stamp, which was issued April 14 in panes of 15.

A pane of 10 stamps from Belgium depicts delicious fruit varieties that had been forgotten but are experiencing a revival. These nondenominated stamps reproduce photographs of the fruit varieties.

Shown nearby is the last stamp from the pane, picturing the reinette etoilee apple that originated in Belgium and the Netherlands around 1830.

Varieties of loquat, strawberry, gooseberry, blueberry, loganberry, blood peach, quince, cranberry and blackberry are shown on the other stamps. The pane was issued June 27.