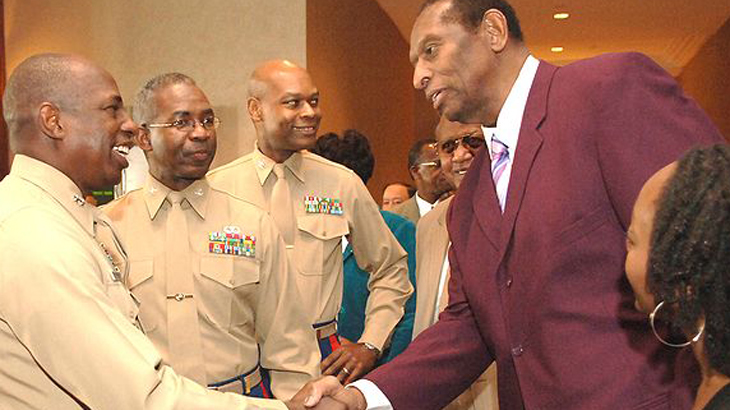 An online petition seeking to put Earl F. Lloyd (right), the first African-American to play in an NBA game, on a U.S. stamp was created on Aug. 25.

An effort is under way to put Earl F. Lloyd, the NBA's first African-American player, on a U.S. stamp.

The Earl F. Lloyd Foundation started a Change.org petition on Aug. 25 to bring attention to the cause, which was launched about six months after Lloyd died on Feb. 26, 2015.

The petition reads as follows:

On October 31, 1950, Earl Francis Lloyd became the first African-American to play in a NBA basketball game. In 1955 Mr. Lloyd would become the first African-American to win a NBA World Championship. Earl Lloyd would later become the first NBA scout and assistant coach in 1960; and then the first full time NBA bench coach in 1972 with The Detroit Pistons. Earl Lloyd's groundbreaking achievements helped to pave the way for people of color and all minorities, not only in the world of sports but in all aspects of American life!

We are requesting the United States Postal Service, Citizens' Stamp Advisory Committee to issue a Commemorative Stamp in honor of the late great Earl Francis Lloyd.

The NBA pioneer is not the only 20th century athlete that is the focus of a U.S. stamp campaign. There is a movement to put Minnesota Twins legend Harmon Killebrew on one, as well.