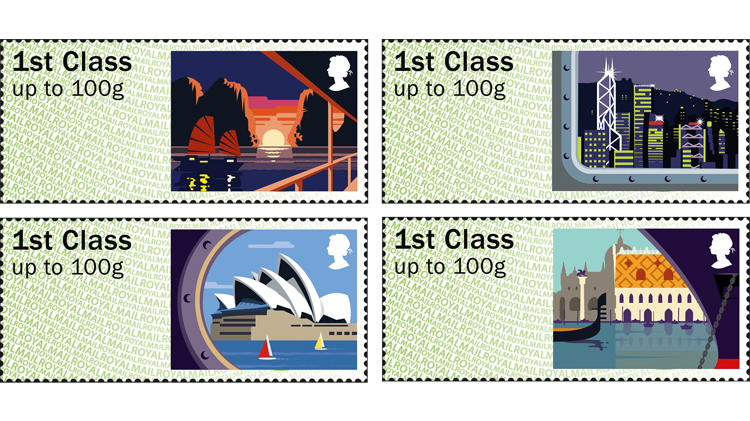 The White Cliffs of Dover in the English Channel are featured on one of the six labels in Great Britain’s post & go set with the theme of sea travel. 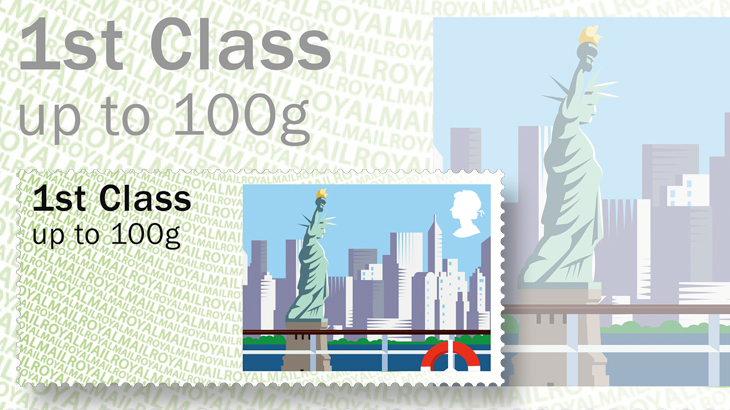 A British computer-produced self-adhesive postage label, known as a post & go, depicts the Statue of Liberty and the New York skyline as viewed when approaching the city by ship.
Previous
Next

An American icon is pictured on British computer-produced self-adhesive postage labels to be issued Sept. 16, the opening day of the Autumn Stampex show in London.

The design depicts the Statue of Liberty with the New York skyline behind it, as seen from the deck of a ship.

Great Britain’s Royal Mail said, “While New York City is the hub of a nation that celebrates speed, the ideal way to see Manhattan at its most majestic is sailing in at a dozen knots from the Atlantic Ocean, as the thriving city and its high-rise structures slowly come into view.”

The label is part of a set of six pictorial labels illustrating the theme of sea travel. Great Britain’s Royal Mail calls such labels “post & go.” The denominations are printed at the time of purchase.

In announcing the new set, Royal Mail said: “The UK is perhaps the best-connected island nation in the world, enjoying an unparalleled range of air links, as well as a tunnel to Continental Europe. Yet the British people also cherish sea travel — whether watching the White Cliffs of Dover retreating at the start of a great adventure, catching a first glimpse of the palaces of Venice or viewing a haunting Vietnamese seascape.

“An open deck also provides the best way to arrive in cities such as Hong Kong, New York and Sydney, whose iconic landmarks sharpen into focus as seafarers approach.”

As mentioned in the quote, one of the new Sea Travel labels features the White Cliffs of Dover.

An article by Joanne Thomas in the “Travel Tips” section of the website of USA Today explains the significance of these towering chalk cliffs: “The White Cliffs of Dover are the first and last sight you see when departing from or arriving in the port of Dover. Their striking appearance adds to their sentimental value as a symbol of England. The cliffs’ symbolic value to the English is exemplified in the famous World War II-era song sung by Vera Lynn, “(There’ll Be Bluebirds Over) The White Cliffs of Dover.”

In addition to the cliffs, the design of the label includes a sailboat and the South Foreland Lighthouse.

Two of the labels show scenes in Asia: junks with red sails among the limestone pillars in Vietnam’s Ha Long Bay, and the skyline of Hong Kong lit up at night, as seen from a window of a Star Ferry.

Australia’s most famous man-made landmark, the Sydney Opera House, is viewed through a porthole.

The sixth label depicts a gondola, a museum and a church on Venice’s Grand Canal.

Andy Tuohy created the illustrations for the labels, and Osborne Ross designed them.

Royal Mail also is offering a first-day cover franked with all six of the Sea Travel post & go labels.