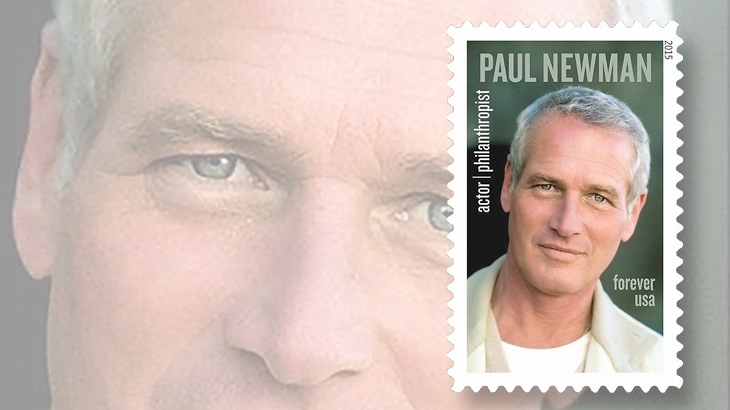 Paul Newman is honored as an actor and philanthropist on a United States forever stamp to be issued Sept. 18.

Instead, the stamp is being issued Sept. 18 in a simple pane of 20 vertical stamps showing photographer Steve Schapiro’s portrait of Newman.

The reason for this might be explained by the stamp inscription, which has “actor/philanthropist” reading up the left edge, along with his name across the top in uppercase letters, and “forever usa” in lowercase letters near the lower-right corner.

The inclusion of “philanthropist” on this stamp makes it clear that it’s not just Newman’s considerable acting resume that brought him to this stamp honor.

However, film fans worldwide will remember Newman primarily as the star of some of the most enduring Hollywood films ever released, including Cool Hand Luke (1967), Butch Cassidy and the Sundance Kid (1969), and The Sting (1973).

The new offset-printed stamp will be issued in the Playhouse Square District in Cleveland, Ohio.

The first-day ceremony will begin Friday at 10:30 a.m. at U.S. Bank Plaza on East 14th Street and Euclid Avenue.

According to the Postal Service, Sept. 18 will be proclaimed as “Paul Newman Day.”

“More than just a film icon, Newman used his success as an actor, writer, producer and director to advance his philanthropic endeavors funding charitable causes in an effort to make the world a better place,” the Postal Service stated in a June 29 press release announcing the upcoming stamp.

“Newman’s SeriousFun Children’s Network has helped more than 600,000 children and families in the United States and beyond. Perhaps Newman’s boldest action on the philanthropic stage came in 1982, when he founded the Newman’s Own food company.

“Beginning simply with a single product of oil-and-vinegar salad dressing and a commitment to quality and charitable giving over profit, the company has since grown into an international business with more than 200 products. Along the way, Newman’s Own has donated more than $430 million to thousands of charities.

“In 1998, Newman helped create the Committee Encouraging Corporate Philanthropy, an organization composed of board chairs and CEOs of major corporations that focuses on corporate philanthropy and citizenship. In 2006, he co-founded the Safe Water Network, which provides market-based safe water solutions to people in the developing world.”

Newman summed up his philanthropic impulses at the end of a short video on the website of the Newman’s Own company by saying, “What could be better than to hold your hand out to people who are less fortunate than you are?”

Paul Leonard Newman was born in Shaker Heights on Jan. 26, 1925, and attended Ohio University before joining the Navy in World War II and serving in the Pacific theater.

He studied drama at Yale and at the New York Actor’s Studio, and began appearing on stage and in television programs in the 1950s.

His Broadway debut came in the 1953 production of Picnic by William Inge, and his first Hollywood film was The Silver Chalice in 1954.

After completing several more films, Newman achieved stardom (and earned an Academy Award nomination) opposite Elizabeth Taylor in Cat on a Hot Tin Roof in 1958.

He was nominated again three years later for his role as Eddie Felson in The Hustler. Newman earned several nominations during his career but just one win, for The Color of Money in 1986.

Redford had plans for a third collaboration with Newman, A Walk in the Woods, the adventure film to be released Sept. 2 with Redford and Nick Nolte in the starring roles.

Lindsey Bahr reported for the Associated Press that Redford acquired the movie rights to the story and planned to film it with Newman as his co-star, but Newman’s declining health caused the project to be shelved until now.

Newman also directed several films, and returned to the stage from time to time.

In 1955 Newman was featured as George Gibbs in a production of Thornton Wilder’s Our Town, starring Frank Sinatra as the stage manager.

In 2003, Newman took on the stage manager role in a production that aired on PBS.

Newman was married twice: to Jackie Witte from 1949 to 1958, with whom he had a son and two daughters, and to actress Joanne Woodward from 1958 until his death from lung cancer at age 83 on Sept. 26, 2008. Newman and Woodward had three daughters together. His son Scott died in 1978.

Woodward and Newman appeared in several films together, including The Long Hot Summer in 1958, and Harry & Son in 1984, which Newman directed.

Newman also was an avid auto racing enthusiast, both as a driver and as a team owner. At age 70, he won the GT1 championship at the Daytona Rolex 24.

Technical details and first-day cancel ordering information for the Paul Newman commemorative stamp are given below.

Standard ordering instructions apply. Collectors requesting first-day cancels are encouraged to purchase their own stamps and affix them to envelopes. The first-day cover envelopes should be addressed for return (a removable label may be used), and mailed in a larger envelope addressed to Paul Newman Stamp, Customer Relations Coordinator, Cleveland Post Office, 2200 Orange Ave., Room 234, Cleveland, OH 44101-9998. Requests for first-day cancels must be postmarked by Nov. 17.