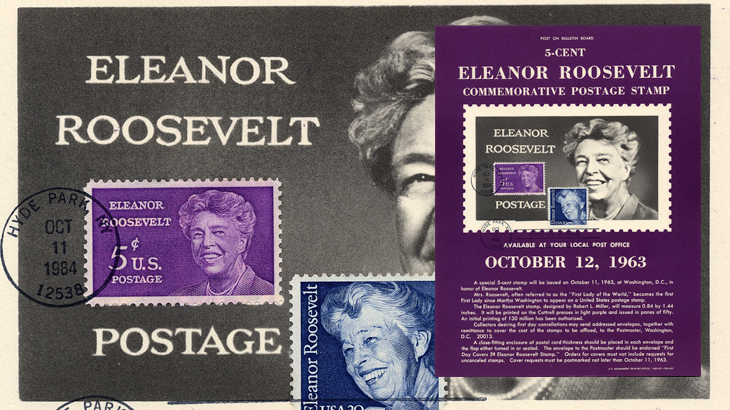 Announcement posters for forthcoming stamp issues were supplied to United States post offices beginning in 1959, and made available to collectors a few years later. Some collectors added appropriate stamps and cancels, such as on this poster for the 1963
Previous
Next

Knowing in advance what stamps will be issued, where they will be issued and on what dates is important information for those servicing first-day covers, whether dealers or individual collectors.

The United States postal agencies — the Post Office Department until 1971, the Postal Service thereafter — have used a variety of methods to notify stamp collectors directly about upcoming issues.

The final such postcard was for the 3¢ George Washington Carver stamp issued Jan. 5, 1948 (Scott 953), and the postcard also announced the final issue of 1947.

Finder does not say why the practice ended.

Many philatelists, and particularly exhibitors, collect these postcards.

The Post Office Department began sending 8½-inch by 11-inch posters announcing new issues to post offices in 1959, and within a few years these were available to collectors by subscription through the Government Printing Office.

Some collectors or dealers later affixed the new stamps to the posters and had them serviced with the first-day-of issue cancel.

Some of these posters exist folded into envelope shape and serviced as FDCs.

Generally, the posters that were sent to post offices were unfolded and surviving examples often have thumbtack holes in the corners, while the announcement posters received by subscribing collectors were folded in thirds so they could be mailed in No. 10 business-size envelopes.

Particularly in the late 1960s and early 1970s, quantities of unfolded and holeless posters were placed on tables in the first-day city’s main post office or at the first-day ceremony.

Someone in the then-new U.S. Postal Service must have noticed the interest in first-day-serviced announcement posters, because in 1972 the USPS began offering “souvenir pages” on subscription — either the very same posters or ones that were nearly identical, serviced with the appropriate new stamps and cancels.

For a time in 1972 and 1973, both serviced announcement posters and souvenir pages were produced, by individuals and by the USPS, respectively.

The announcement posters were discontinued in 1981 with the 17¢ Rachel Carson stamp in the Great Americans series (Scott 1857).

There is a collectors’ organization devoted to these pages and announcement posters, as well as to the related USPS commemorative panels. For more information, contact the American Society for Philatelic Pages and Panels at Box 475, Crosby, TX 77532.