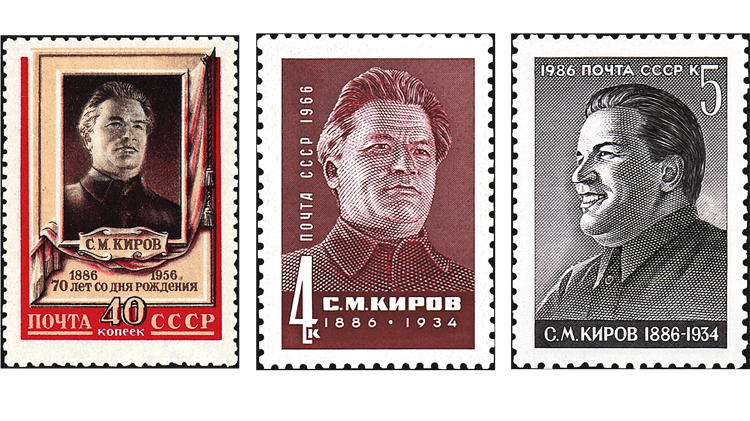 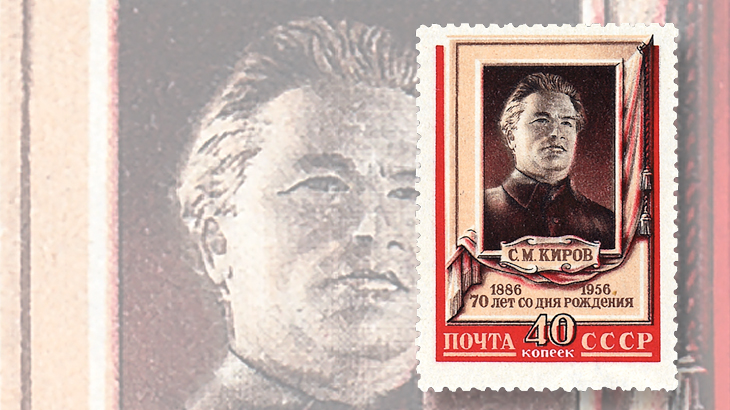 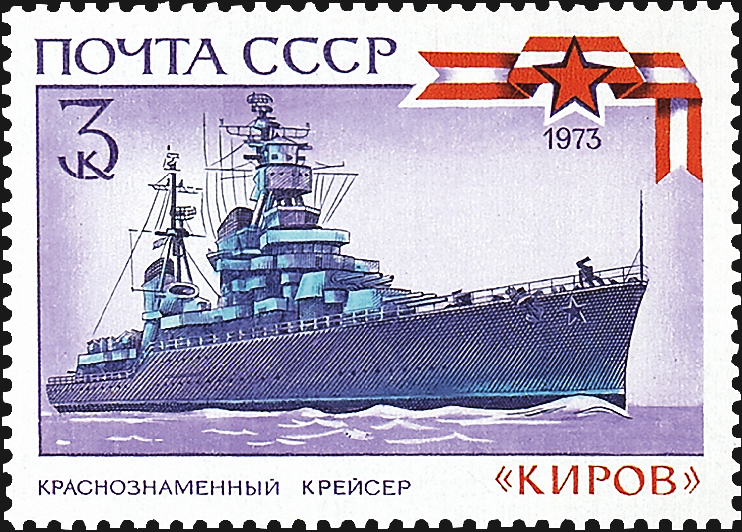 A class of battle cruisers were named after Kirov. A 1973 Soviet Union 3-kopeck stamp (Russia Scott 4119) shows the cruiser Kirov. 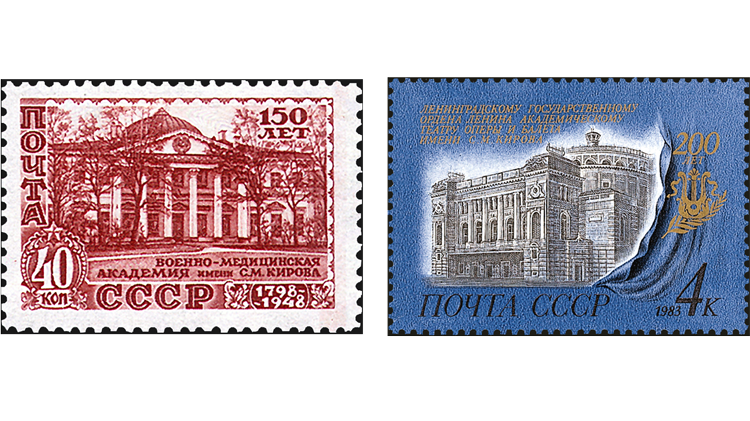 Stamps picturing two of the many places named in Kirov’s honor: a 40-kopeck stamp from a set three marking the founding of the Kirov Military Medical Academy (Russia Scott 1330), left, and a 4k showing the Kirov Opera and Ballet Theater in Leningrad (5142). 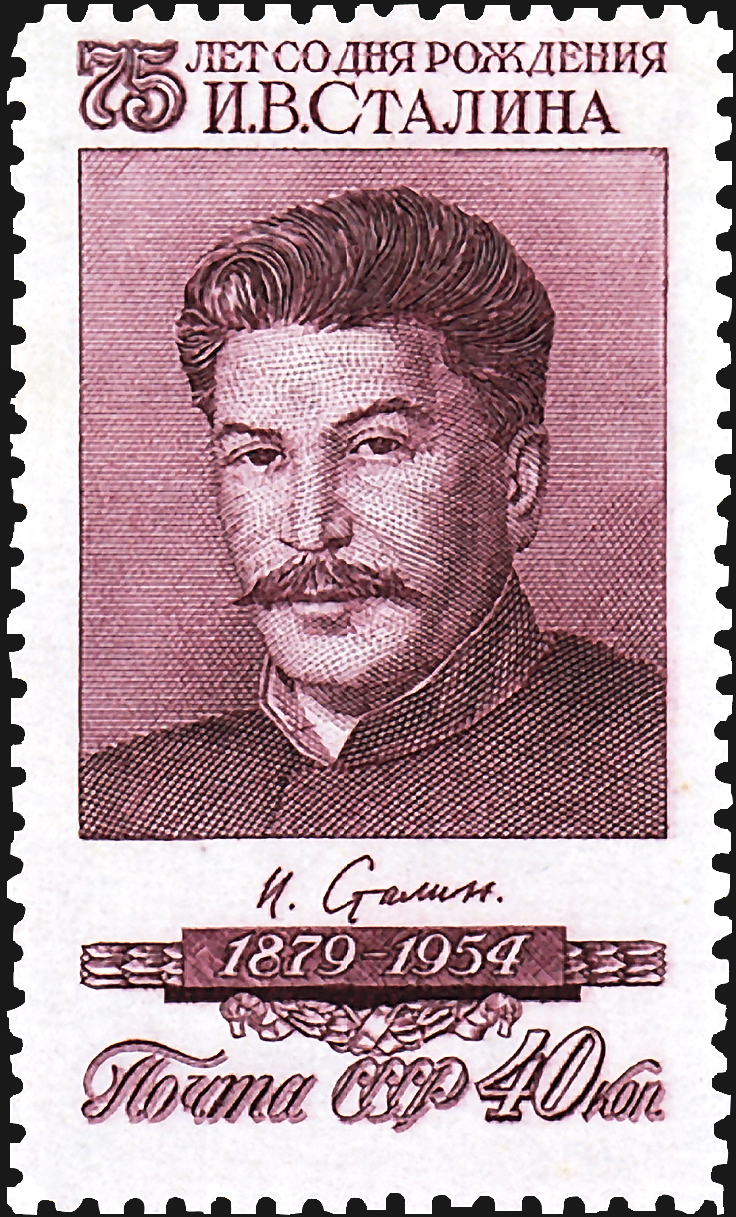 All countries use their postage stamps to promote the message of who they are and what they stand for to their own population and to the rest of the world. But the Soviet Union (1923-1991) was unusual in that many of the people honored on its stamps were actually condemned and executed by the regime.

The death of Vladimir I. Lenin in 1924 left a power vacuum in the Communist Party, but by 1927 all other contenders had been subjugated to the iron will of Joseph Stalin.

A Soviet 40-kopeck Joseph Stalin stamp (Russia Scott 1743) issued to commemorate the 75th anniversary of Stalin’s birth is shown nearby. Stalin was atypical among dictators in that his megalomania was not served by large numbers of stamp issues bearing his likeness. Although Communist puppet states and satellites showed their loyalty by the number of Stalin issues they produced, only a few Soviet Union stamps bear his likeness.

Sergei Mironovich Kirov was born March 27, 1886, in the village of Urzhum. His birth name was Kostrikov. Like most of the early Bolshevik leaders, he adopted a revolutionary name when he joined the party. Educated as an engineer, he fell under the spell of Marxism, joining the Russian Social Democrat Labor Party in 1904.

Kirov was active in the Revolution of 1905 and was arrested for his activities but released in 1906. At its second party congress in 1903, the Russian Social Democrat Labor Party split into Bolshevik (majority) and Menshevik (minority) factions.

The Bolsheviks advocated violent revolution, while the Mensheviks chose to work through the political process. The Bolsheviks, led by Lenin, were actually the minority, but they chose the labels, and the Mensheviks obligingly went along. After his release from arrest, Kirov joined the Bolsheviks.

The watershed moment in relations between Stalin and Kirov came in 1934. Kirov was gregarious, hearty, and genuinely liked within the party. Stalin was cool, aloof and calculating. While all feared and respected Stalin and many owed their positions to him, no one really liked him. At the 17th congress of the Communist Party held January-February 1934, Kirov was elected to the Central Committee of the Communist Party with just three votes against him, far fewer than Stalin garnered. After Kirov spoke, the standing ovation he received from the party members lasted almost twice as long as the one received by Stalin.

When Stalin called for the death penalty for Martemyan Ryutin and other Old Bolsheviks who opposed him, Kirov said, “It would be dangerous if the Bolsheviks started executing Communists with different views.” Kirov’s fate was sealed.

On Stalin’s orders, the NKVD (Soviet secret police) prepared a plot to dispose of Kirov.

[Editor’s note: Some sources question whether Stalin ordered the assassination.]

On the afternoon of Dec. 1, 1934, an NKVD assassin lurking in the corridor shot Kirov in the back of his head as he approached his offices in the Smolny Institute in Leningrad. Upon hearing of the success of the operation Stalin immediately promulgated the Law of Dec. 1, 1934, which he had previously drafted in preparation for the event. The law applied to crimes committed by counterrevolutionary terrorists, White Guards, and wreckers.

The assassin’s contrived confessions were used to arrest and bring to trial 14 once-powerful Old Bolsheviks who had fallen under Stalin’s gimlet eye. The trial was held Jan. 15, 1935. They were found guilty, expelled from the party, and given varying prison terms. But Stalin wasn’t through with them. In August 1936, they were brought back to trial for running a terrorist organization. Stalin promised to spare their lives if they confessed, which they did in the first of the infamous show trials of the Great Purge. They were shot on Aug. 25 within hours of being convicted.

Stalin used the Kirov assassination and the forced confessions of the show trial victims as proof of the existence of a vast counterrevolutionary conspiracy at large in the Soviet Union.

More than 680,000 people were formally tried and executed in the Great Purge. The victims included most of the surviving Old Bolsheviks, rank-and-file party members, every military officer above the rank of colonel, priests, poets, writers, artists, academicians, foreign technical experts brought in to modernize Soviet industry, well-to-do peasants, national minorities, foreign expatriates who had come to the Soviet Union to help build communism, and foreign communist leaders summoned through the Comintern to return to Moscow.

As many as another 200,000 victims were secretly executed and reported to have died by accident or incidental violence. Hundreds of thousands more were sentenced to slave labor in the gulags, where most of them perished.

If Stalin viewed Kirov as a threat in life, he was determined to make him an asset in death. The cult of Kirov, “Comrade Stalin’s best comrade-in-arms and friend,” was immediately launched. The cult is well-represented in postage stamp issues of the Soviet Union. He was pictured on a 1935 stamp (Russia Scott 582), and shown nearby are three Kirov stamps issued between 1956 and 1986 (1832, 3185 and 5441).

Stalin was first mourner at Kirov’s state funeral in Red Square. Kirov’s hometown and the oblast in which it was located were immediately renamed for him. His edited writings were widely republished and were required reading. Several other towns in Russia, as well as towns in Armenia and Azerbaijan, also took his name. The machine works in Leningrad was renamed for him. A 40k Kirov Machine Works stamp (Scott 1552) is shown nearby. The Mariinsky Ballet of Leningrad became the Kirov Ballet.

Not one to leave loose ends unsecured, Stalin saw that virtually everyone connected with the Kirov assassination was executed or murdered over the next few years.