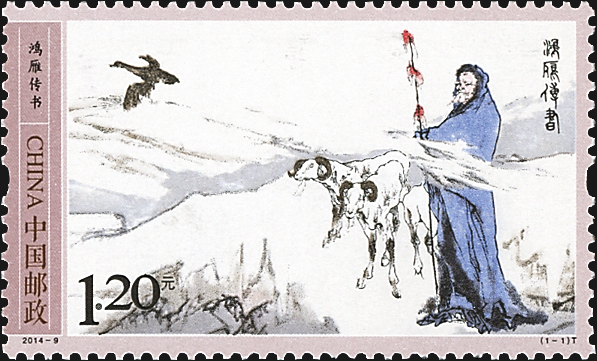 China’s first joint issue with Taiwan, the 2015 Swan Goose Carries Message stamp, was the subject of a temporary exhibit at the National Postage Stamp Museum in Beijing. 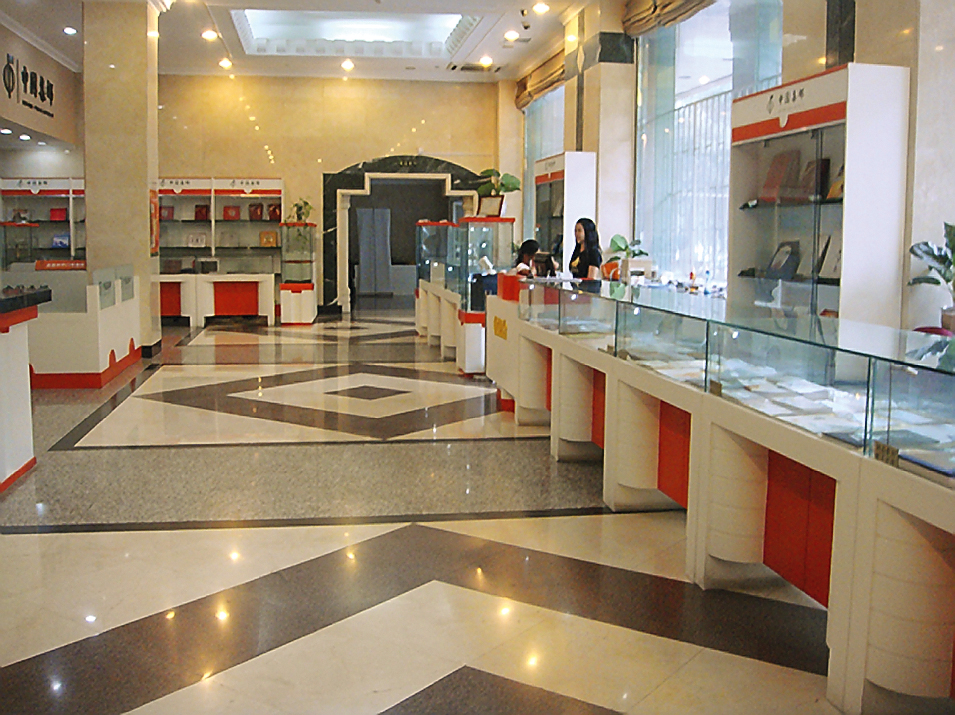 The interior of the store at the headquarters of China Philately, the national stamp-issuing entity, in Beijing with display shelves and counters. 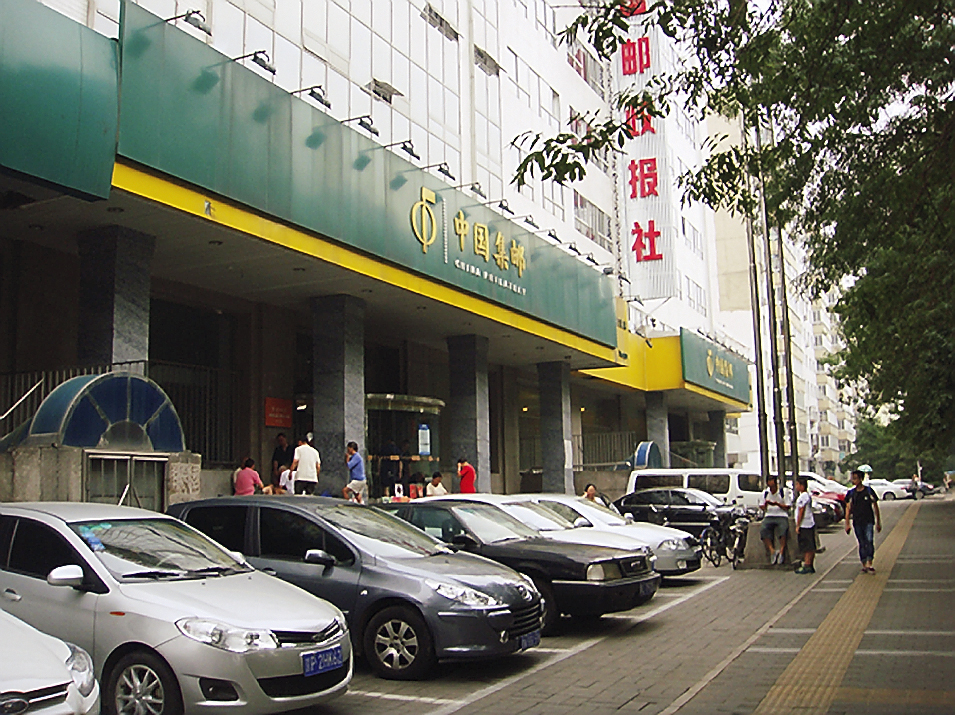 An exterior view of the China Philately headquarters retail store. 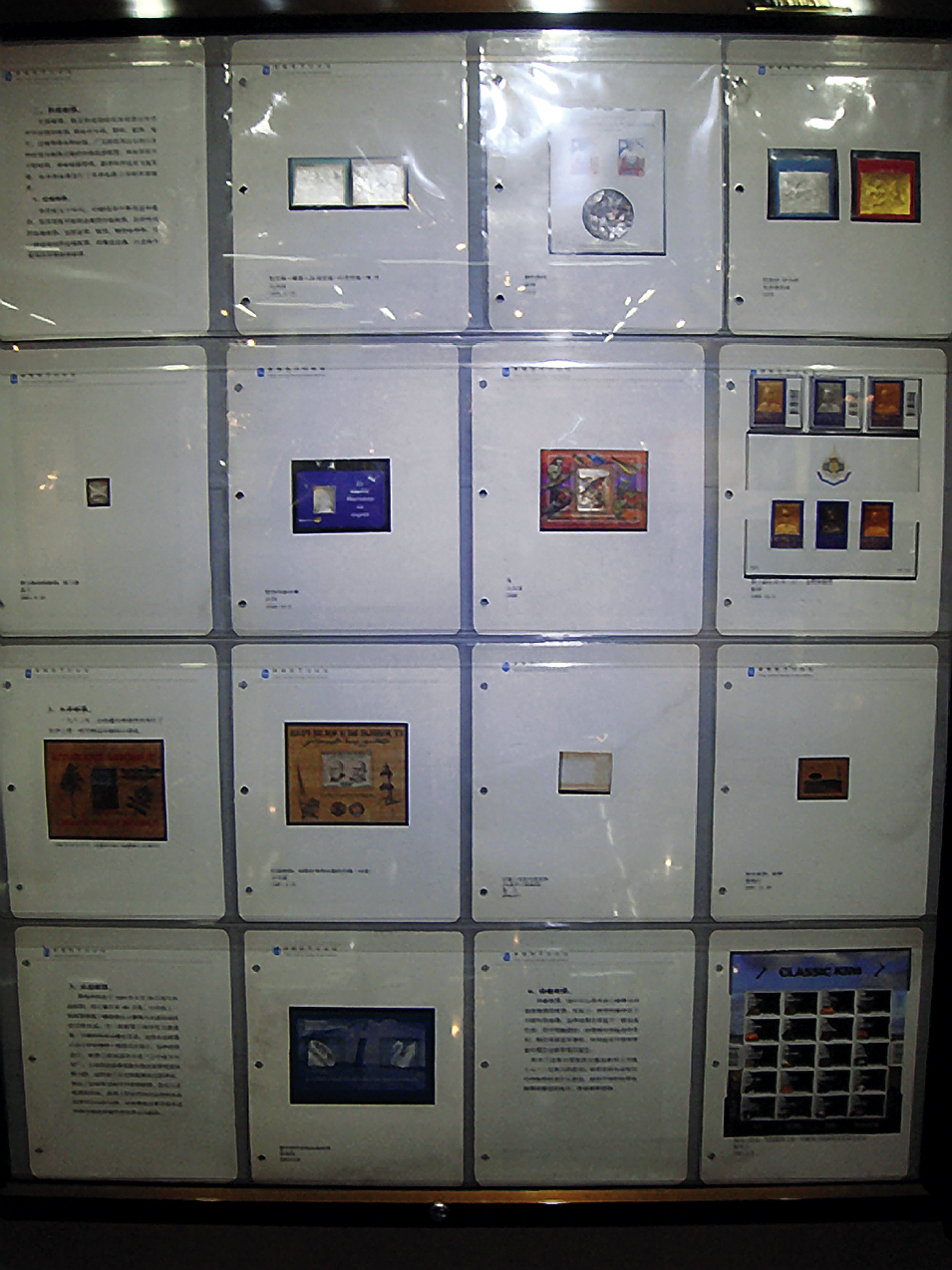 Exhibit frames showing worldwide stamps of unusual shapes or made from unusual materials. 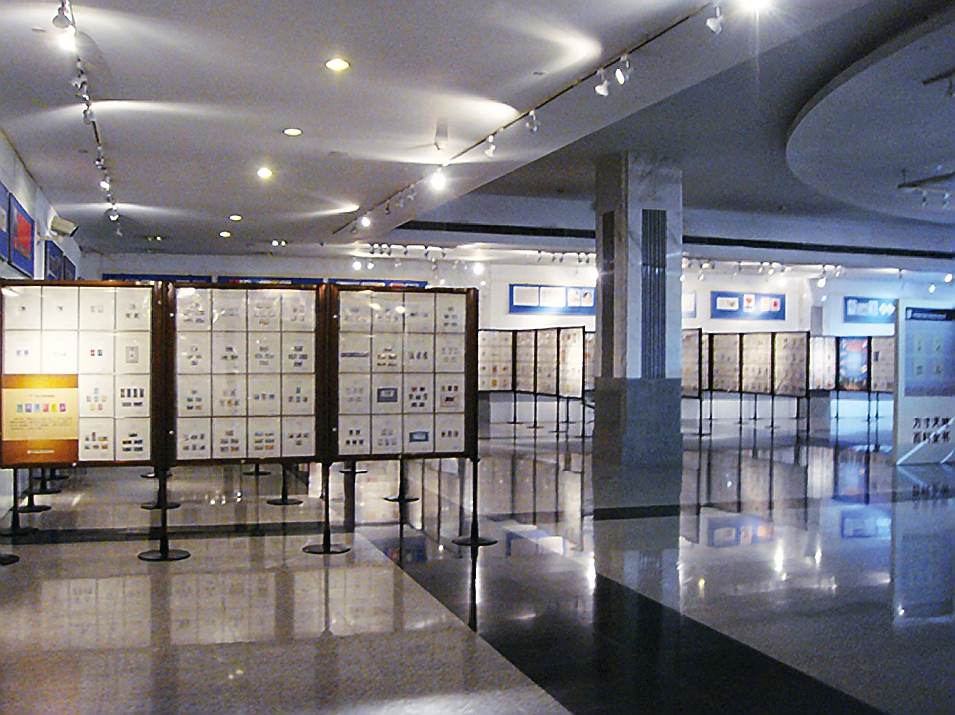 An exhibition hall on the second floor of the national postage museum in Beijing houses frames of all of China’s stamps in chronological order. 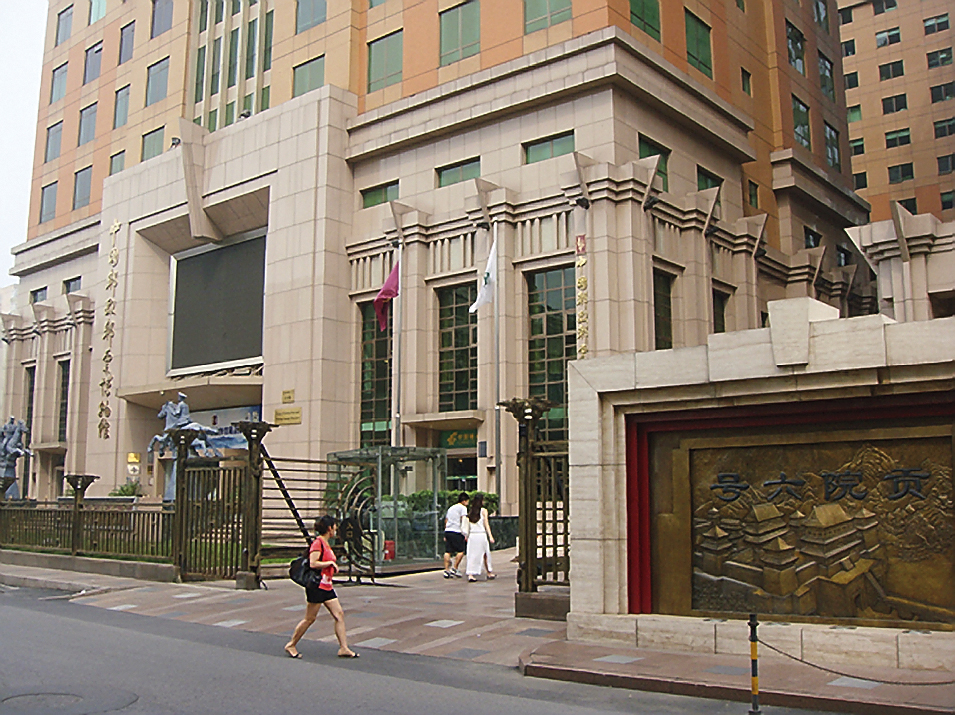 An exterior view of the China National Postage Stamp Museum. 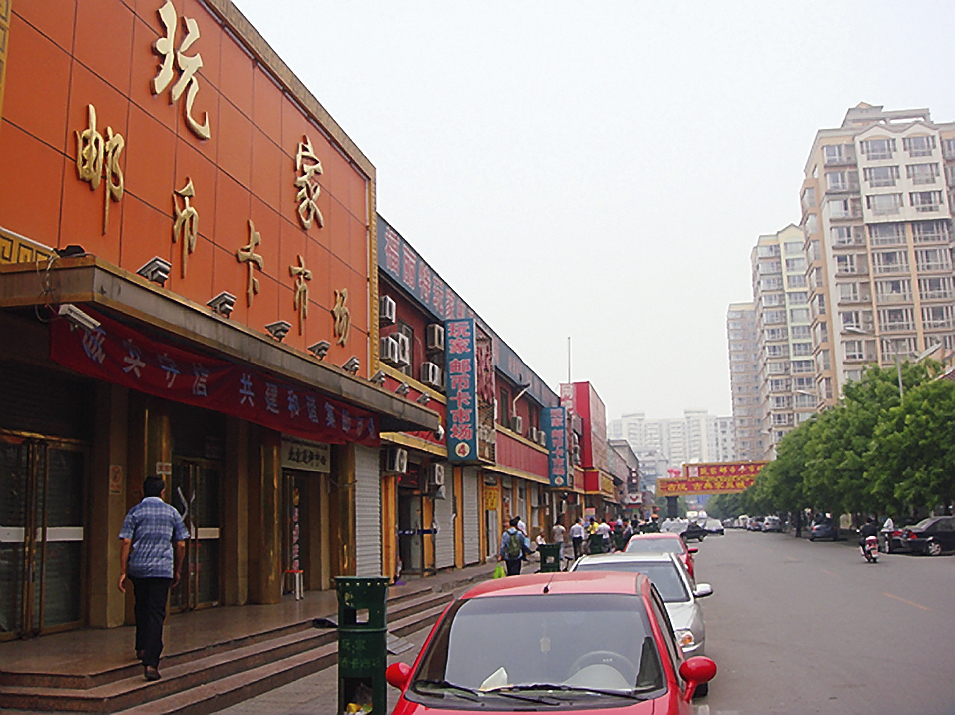 A view of the Madian stamp market showing the storefronts of stamp shops. 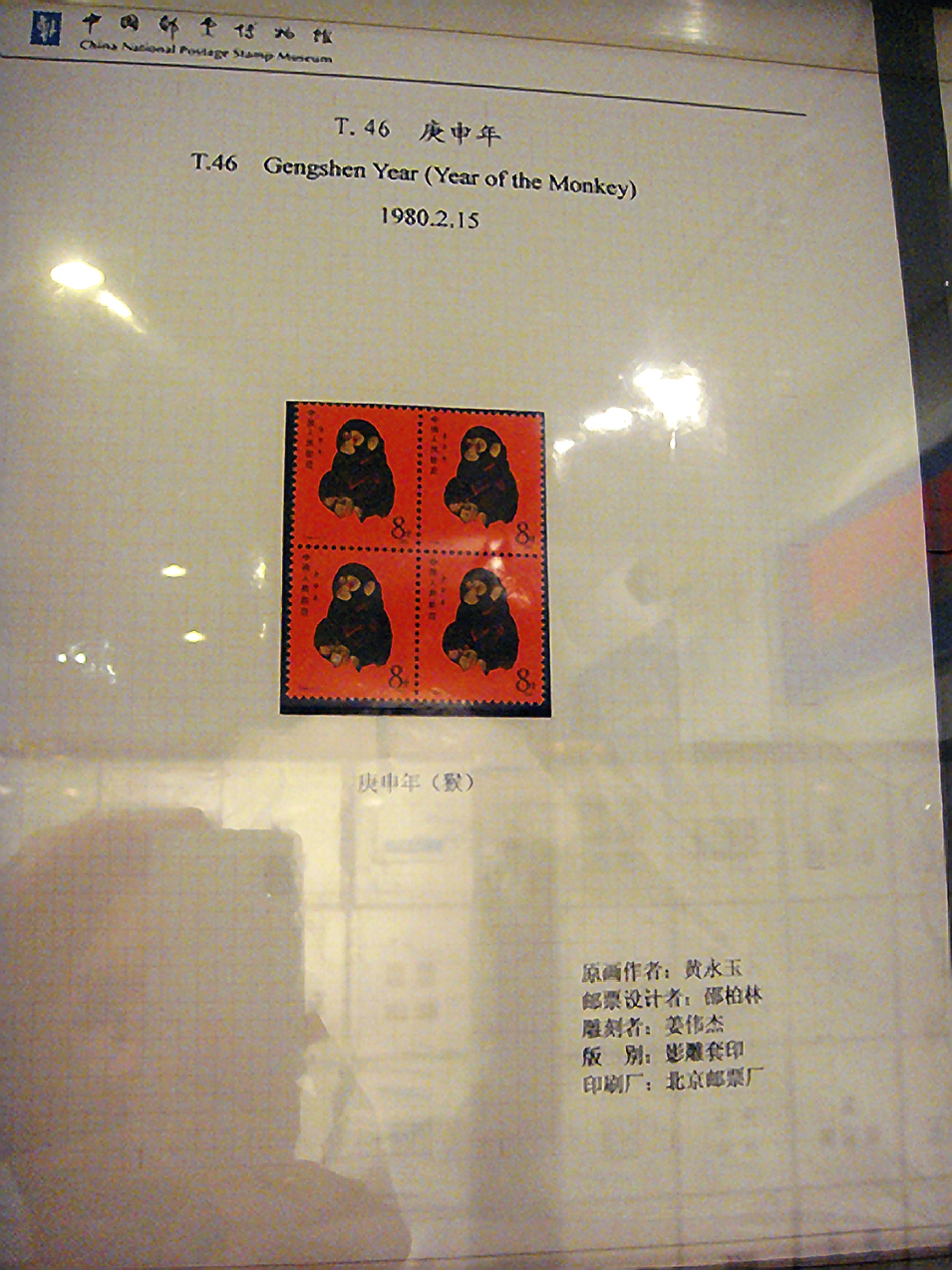 Exhibit frame showing a block of four of the 1980 Year of the Monkey New Year stamp (Scott 1586).
Previous
Next

Beijing has been an important city since antiquity. It was the capital of China in the last three dynasties of Yuan (Mongol), Ming and Qing, and also is the capital of the People’s Republic of China.

My connection to this city began when my family moved there in 1992. My father was assigned by his company to work abroad as an expatriate. I lived in Beijing for two years, but did not return there until 2013.

During my absence, the city went through huge physical transformations. My recent travels to Beijing were as full of personal excitement as can be imagined.

As the nation’s capital and seat of the government, Beijing has many important philatelic sites to explore. The first place I visited was the National Postage Stamp Museum.

I was astonished that the museum was solely for postage stamps, rather than having the broader range of a postal museum covering all aspects of the postal system. But in this museum, the focus is decidedly on its stamp collection.

The museum would be a treat for any stamp collector visiting Beijing. It is located at the heart of the city, about a 10-minute walk from the Jianguomen subway station.

The museum is in a free-standing multi-story building that is impressive when viewed from the outside. Admission is free at all times, but there were not many visitors during the weekend in 2014 when I was there.

I enjoyed the quiet setting, which echoes the nature of stamp collecting.

There is a small counter operated by China Philately on the ground floor. Stamps are sold, but the stock on offer is very limited. Thematic books with previous issues of a common theme are sold at retail prices established by the government. No recent mint stamps are offered at face value.

The ground floor also houses temporary exhibits. At the time of my visit, there was an exhibit about letters written by famous people.

This exhibit was in conjunction with a new stamp, Swan Goose Carries Message, China’s first joint issue with Taiwan. The 1.20-yuan stamp was issued May 10, 2014 (Scott 4189).

The main exhibit space on the second floor houses an amazing number of frames, chronologically showcasing every stamp issue of China. These include the Chinese Empire (Qing dynasty), the Republic of China, some World War II-era liberated zones, and issues of the People’s Republic of China to the present day.

Other highlights of the permanent exhibit include worldwide stamps of unusual shape or made from unusual materials, and original artwork used for the designs of some Chinese stamps, such as the souvenir sheet for the 1981-82 Twelve Beauties from the Dream of Red Mansions issue (Scott 1761).

The third floor is dedicated to postal history and communications.

On the fourth floor, there are continued exhibits of postal service history, as well as a special gallery of rare stamps. In addition to the regular first-issue stamps, this vault also houses the withdrawn Cultural Revolution-era “All China Is Red” stamp (Scott 999A), the design of which shows Taiwan in white. There is also a full pane of the 1980 Year of the Monkey New Year stamp (Scott 1586), which is considered the bellwether of the Chinese stamp market.

The taking of photographs is prohibited in this gallery, but any collector will still be delighted to view the stamps.

The museum is located on Jianguomen Street, Chaoyang District. Hours are Tuesday to Sunday from 9 a.m. to 3:30 p.m.

Beijing had a few outdoor stamp markets in the 1990s, but they were relocated because of urban renewal. Today, Madian, located on North Third Ring Road, is the largest stamp market in Beijing. It is a zoned district with many stamp shops and some coin and card shops operated by small dealers. These are individual street-front stores.

As in Shanghai’s Lugong Stamp and Coin Market, which I described in an article in the April 6 issue of Linn’s, the stamp wholesalers at the Beijing market mainly target investors and retail dealers.

However, the setting is very different from Shanghai’s stamp market. The stamp stores are larger and well-stocked with a wide variety of items.

You can browse through the display counters and some boxes of stamp and covers on sale.

Some of the stamp stores were closed when I visited during the weekend, but it was fun to browse, and I was able to acquire some items I was looking for.

The hours vary by store.

The headquarters of China Philately, the stamp-issuing authority, has an impressive retail stamp store located in the lobby.

New issues at face value are available only by subscription.

The headquarters store has two long rows of display counters with items for sale. The sales agent was friendly and patient, showing me the products in which I was interested.

In addition to the higher-priced thematic books, the store also offered first-day covers and maximum cards for many recent stamp issues.

There is another counter at headquarters that sells mint older issues of China stamps. Some were issued as long ago as the 1970s and perhaps earlier. The prices are about 20 percent higher than other retail sources.

If you wonder why anyone would be willing to pay more to buy stamps there, the answer is simple. There are many forgeries of China stamps being sold, and the stamps at headquarters are guaranteed to be genuine.