France’s La Poste will issue a booklet in September with a dozen stamps focusing on the sense of sight. 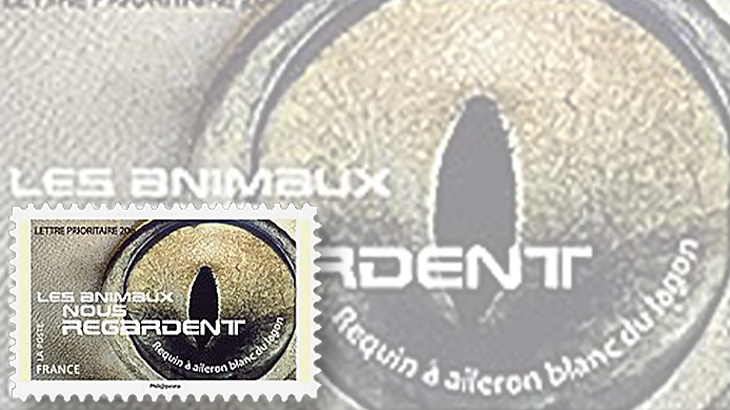 Close-ups of 12 different animals’ eyes are featured on these self-adhesive booklet stamps from France.
Previous
Next

New stamps from France feature animal’s eyes and are appropriately called “Les animaux nous regardent,” which translates to “the animals are watching.”

Each design focuses on the animal’s pupil. If you look closely, you can see the name of the animal inscribed on each eye.

On the first stamp in the upper left, the inscription “requin a aileron blanc du lagon” appears just below the pupil of a whitetip reef shark.

Underwater photographer Jeffrey Rotman took this shark close-up. Like all of the photographs shown on these stamps, the photo is copyrighted to Biosphoto, an agency handling stock photographs related to nature, the environment and gardens.

Pictured on the second stamp is the eye of a southern white-faced owl, as photographed by Martin Harvey.

An animal named for its eye color, the red-eyed tree frog, is shown on the third stamp, from a photograph by Ingo Arndt.

Found in rainforests, this frog generally keeps its eyes closed during the day as part of its effort to blend in with its surroundings, but, if it feels threatened, it opens its large red eyes to startle potential predators.

A pair of birds and a lizard round out the top row: a toucan photographed by John Daniels, a Brahma rooster by Gerard Lacz, and a Bornean crested lizard by Albert Lleal.

Two other photographs by Lacz also are included in the booklet: the eye of a secretary bird on the fourth stamp in the bottom row, and the red-ringed eye of a bearded vulture on the last stamp.

Like the red-eyed tree frog, the bearded vulture uses red to intimidate. Its red ring, known as the scleral ring, becomes more intense in color when the bird is threatened.

In La Poste’s publicity image of the Animals are Watching stamps, the third stamp in the bottom row is inscribed “Tarente geante,” the French name for a huge tarantula (known to be up to a foot across in size) nicknamed the Goliath birdeater.

However, the eye shown does not look like any of the eight tiny eyes of this giant spider. Instead, the eye resembles that of the Philippine gecko, from a photograph by Daniel Heuclin.

The remaining stamp, second from the right on the bottom row, shows Yann Hubert’s photograph of the eye of a tropical fish (Aluterus scriptus).

The stamps are nondenominated, paying the basic rate for first-class letters weighing up to 20 grams. Philaposte printed them by gravure.

La Poste is scheduled to issue another booklet with an eye theme Sept. 25. Called “La Vue,” or Sight in English, this booklet is to be part of a series featuring the five senses.

Designed by Salvi, the stamps picture illustrations by Katy Couprie, a writer and illustrator of children’s books.

Some of the illustrations are based on phrases related to sight. For instance, the stamp in the upper left represents a room with a view, and the third stamp in the bottom row illustrates a bird’s-eye view.