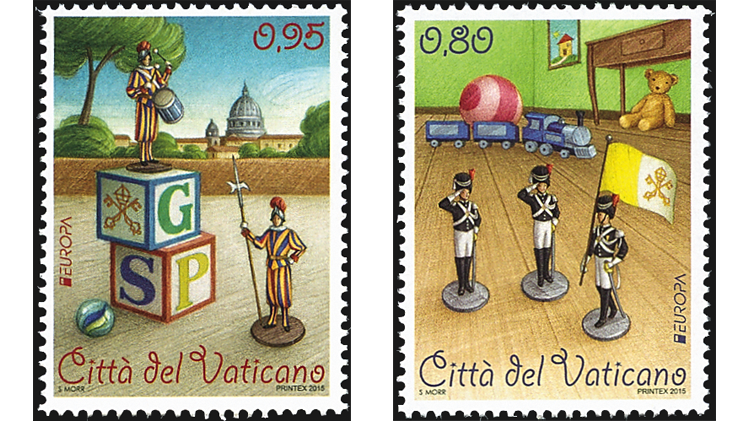 Toy soldiers pictured on the Vatican City’s Europa stamps wear the uniforms of the Swiss Guard and the Papal Gendarmerie Corps. 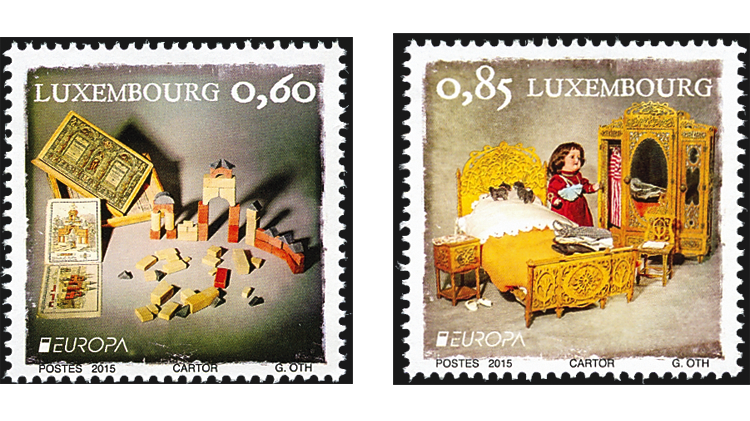 A building box and a room in a doll house, both from a museum exhibit, are shown on the Europa stamps issued by Luxembourg. 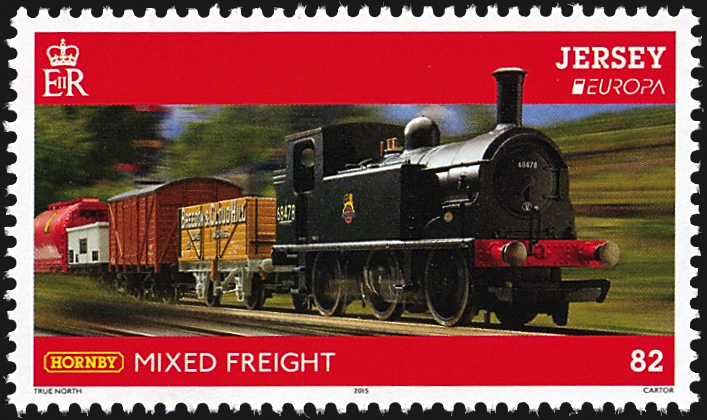 This Europa stamp from Jersey shows a Hornby model train. The stamp is part of a set of six. 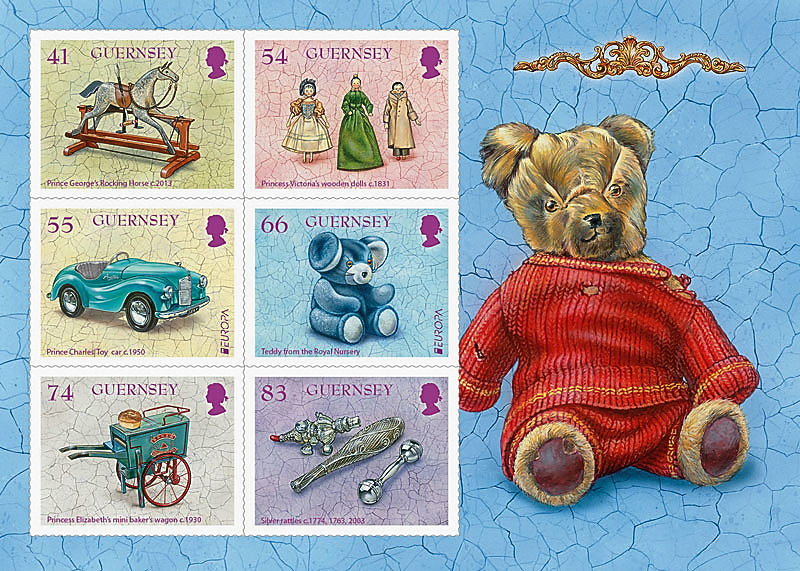 A souvenir sheet from Guernsey pictures toys that have belonged to members of Britain’s royal family through the centuries. The two Europa stamps in the center row show a car that belonged to a young Prince Charles and a blue teddy bear from the royal nursery. 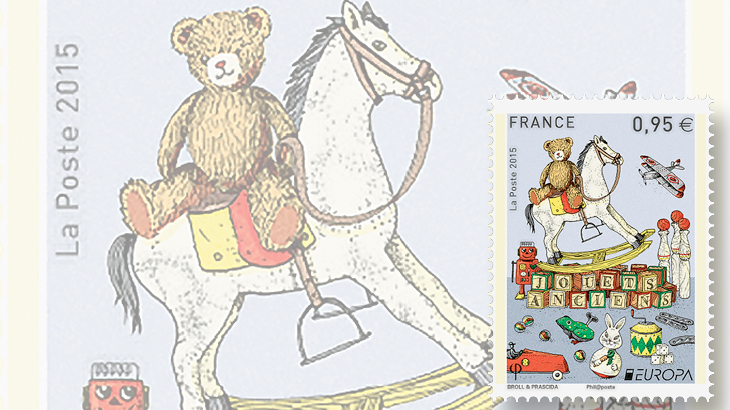 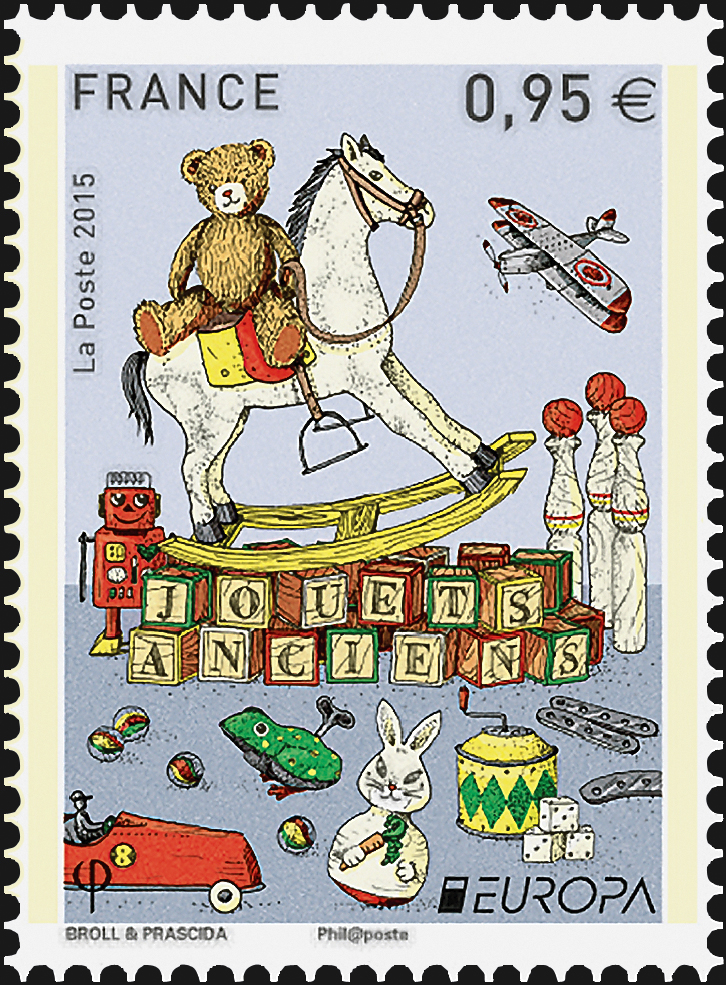 France’s Europa stamp with the theme of old toys shows several toys, including a robot, a rocking horse, a rabbit and a frog. 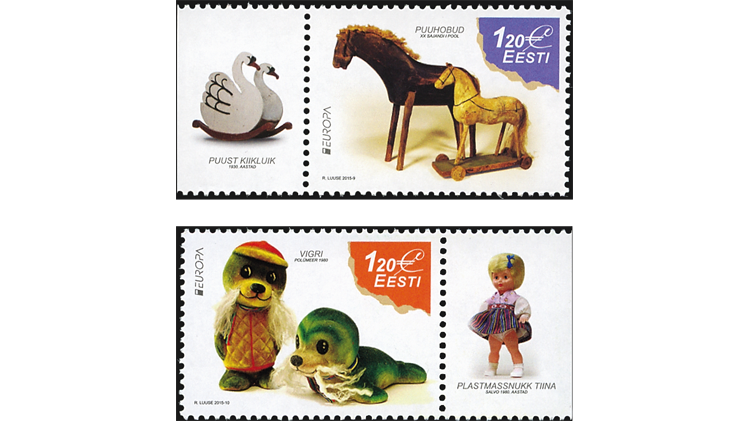 Estonia features toy animals on its Europa stamps for 2015, with wooden horses on one stamp and seal mascots for sailing events in the 1980 Summer Olympics on the other. In addition, one label shows a wooden swan.
Previous
Next

In 1956, six nations (Belgium, France, Germany, Italy, Luxembourg and the Netherlands) joined together to issue the first Europa stamps. All featured the same design of the letters of “Europa” forming a tower.

In the many years since, Europa has grown to be a popular topical collecting area with its own study group, the Europa Study Unit of the American Topical Association and the American Philatelic Society.

But even it you don’t collect Europa as a topic, you may want to take a look at these stamps for the many other topics found on them. Starting in 1974, each participating country selected its own Europa stamp designs based on a common theme for the year, including famous people, the arts, history, local landmarks and much more.

The theme for 2015 is old toys, and, as with the Europa topic, you can find many more topics other than toys in the designs.

Animals are especially abundant on this year’s Europa Old Toys stamps. In addition to the typical teddy bears, rocking horses and stuffed bunnies, there are some unexpected creatures shown, such as a pair of whiskered seals on one of Estonia’s two Europa stamps issued May 5.

According to Posteurop, the group that has been responsible for Europa stamps since 1993, the seal is named Vigri, and this Estonian-made toy was a mascot for sailing events held in Tallinn as part of the 1980 Moscow Summer Olympics.

The other Europa stamp from Estonia shows carved wooden horse toys. If you want to include the se-tenant labels as part of a topical collection, you also will find a swan.

Other waterfowl on this year’s Europa stamps include wooden ducks from Iceland and Switzerland. Among the mammals are a monkey riding a rocking elephant (Germany), a monkey playing a drum (Aland), a goat and polar bear (Liechtenstein), and a ram (Moldova). One of the two stamps from Faroe Islands shows a hoop made from the horns of rams.

A stamp from Montenegro pictures four animals — a zebra , a green stuffed cat, a teddy bear and a rocking horse — along with a variety of other toys.

Transportation, including tricycles along with toy cars, trucks, planes and trains, is another common theme on the new Europa stamps.

A toy car that belonged to Great Britain’s Prince Charles as a child is pictured on one of the two Europa stamps in a souvenir sheet from Guernsey. The other Europa stamp in this sheet shows a blue teddy bear from the royal nursery.

The remaining four stamps in the Guernsey sheet do not bear the Europa inscription, but they follow the same theme, picturing toys that belonged to British royalty from the 18th century through 2013. The most recent item is the rocking horse of Prince George of Cambridge, who turned 2 on July 22.

Like Guernsey, Jersey issued a set of six stamps; two of them bear the Europa inscription. All six stamps feature Hornby model trains and picture actual artwork used to produce the train-set boxes. The 82-penny Europa stamp, shown nearby, depicts a mixed freight train. A model train version of the Flying Scotsman is pictured on the 62p Europa stamp.

Spain issued a pine-scented stamp showing a wooden toy train, while a tapestry version of a steam train, electric train and double-decker bus appear on the Europa stamp from the Isle of Man. Issued April 10, the latter stamp is part of a set of 10 featuring the Tynwald tapestry, which was presented to the Isle of Man parliament in 1979 for its 1,000th anniversary.

Vatican City is among the postal administrations that placed toy soldiers in their Europa stamp designs. One stamp shows two toy soldiers saluting a third who is holding a Vatican City flag. According to the new-issue announcement, they represent “in scale three papal Gendarmes in formal uniforms worn by the Corps during the Napoleonic era until 1965.” A teddy bear, ball and train also are pictured on this 0.80 stamp.

The 0.95 Vatican City stamp shows two toy soldiers of the Swiss Guards, one playing a drum and the other carrying the classic halberd. A marble, two building blocks and a view of St. Peter’s Basilica complete the scene.

The sling shot joins the halberd as the two types of weapons shown on this year’s Old Toys stamps. On a stamp from Greece, a slingshot is pictured among other toys, and one is shown by itself on the stamp from French Andorra. In describing the latter stamp, Posteurop said: “The slingshot was a traditional toy for children during most of the twentieth century, used for hunting birds, as a highly effective and deadly weapon.

“Although as a manufactured toy, it is considered as a weapon that is rather unlikely to cause serious injuries, it is almost no longer used as a toy nowadays.”

CULTURE AND THE ARTS

The toys shown on many of the stamps are museum pieces. For example, the two Europa stamps from Luxembourg depict a building box and a doll house that are on display at the Possen Museum, located in a renovated 17th-century house in Bech-Kleinmacher.

According to information from Post Luxembourg, the building box was “one of the magical gifts that a nursery school child in Hamm could choose at the end of a school year.”

The doll house was a St. Nicholas gift for a 7-year-old girl. Her father made the furniture, and her mother sewed the doll’s clothes and the linens for the bed. When the family was forced to leave their home when World War II broke out, the doll house had to be left behind and was stored in the attic.

Three of the Old Toys stamps portray figures from literature for children. The marionette-turned-boy Pinocchio is riding a three-wheeled vehicle on one of two Europa stamps from Italy. Both of Finland’s stamps show the Moomins, characters created by writer and illustrator Tove Jansson. These handmade Moomin figures were produced by Atelier Fauni in the late 1950s.

Musical instruments, last year’s Europa theme, surprisingly are also pictured on five of this year’s stamps: the aforementioned drums on stamps of Aland and Vatican City; another drum being played by a wooden bear on a stamp from Belarus; a wooden flute, called a curlik, on a stamp from the Bosnia-Herzegovina Croat Administration; and a xylophone on a stamp from Serbia.