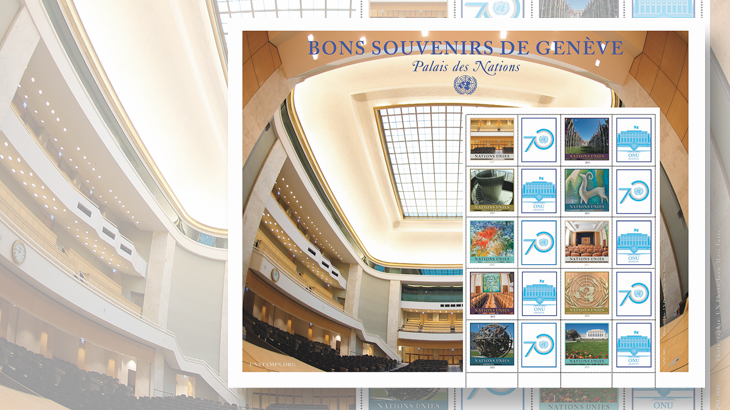 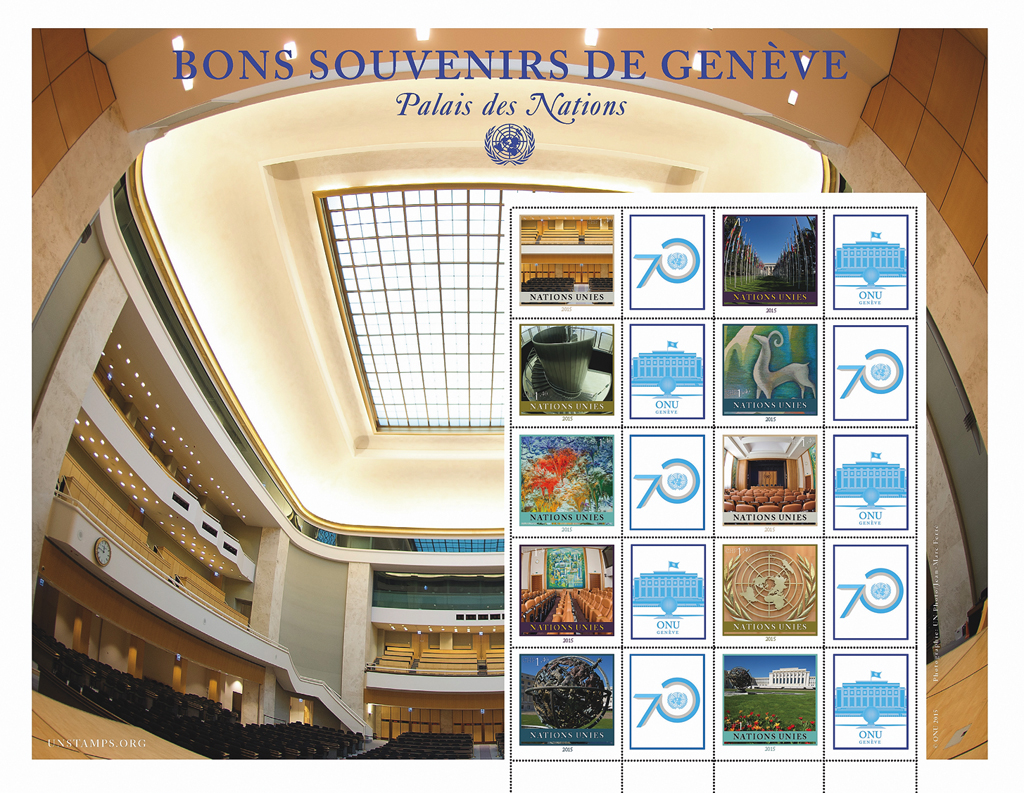 Scenes of the Palais des Nations, the home of the United Nations’ office in Geneva, Switzerland, are featured on the stamps in the new U.N. Postal Administration’s Greetings from Geneva pane.
Previous
Next

The United Nations Postal Administration will issue a new Greetings from Geneva pane of 10 stamps and labels Sept. 21.

The 1.40-franc stamps show different images associated with the Palais des Nations in Geneva, Switzerland, the home of the U.N. office in Geneva.

Located in Geneva’s Ariana Park, the Palais des Nations was built in the 1930s to serve as the headquarters of the League of Nations. The building was transferred to the United Nations after World War II.

Three stamps picture exterior views: the U.N. member nations flags at the entrance known as “Allee des drapeaux,” which translates to flags’ way (upper right), the Armillary sphere, a memorial to President Woodrow Wilson (lower left); and the sphere with the Palais des Nations in the background and flowers in the foreground (lower right).

The second stamp from the bottom on the right side shows the U.N. emblem from the General Assembly room. The largest room in the Palais des Nations, it can seat about 2,000.

Other views of the General Assembly are featured on the stamp in the upper left and in the photograph reproduced in the selvage. The remaining stamps picture other rooms, a spiral staircase and works of art.

The website of the United Nations Office at Geneva said: “The UNOG art collection brings to life the prestigious cultural heritage held within the Palais des Nations. It comprises over 2,000 works dating from the League of Nations period to the present. Most of them are official donations of Member States.

“The collection is a representation of artistic endeavour from all corners of the world. Within the collection, artists have captured key UN values such as peace, human rights and environmental issues. The artworks celebrate and commemorate the positive spirit that underpins the work of the Organization and International Geneva. From a heritage perspective, the collection is a unique and precious part of the story of internationalism that began in Geneva in 1919. “

Visitors to the Palais des Nations can have their photographs taken to appear on the labels se-tenant (side-by-side) with the stamps.

The preprinted version shown here includes two label designs, the U.N. 70th anniversary emblem on five labels and a stylized image of the Palais des Nations on the other five.

Rorie Katz and Eduardo Sinoy of the United Nations designed the pane.