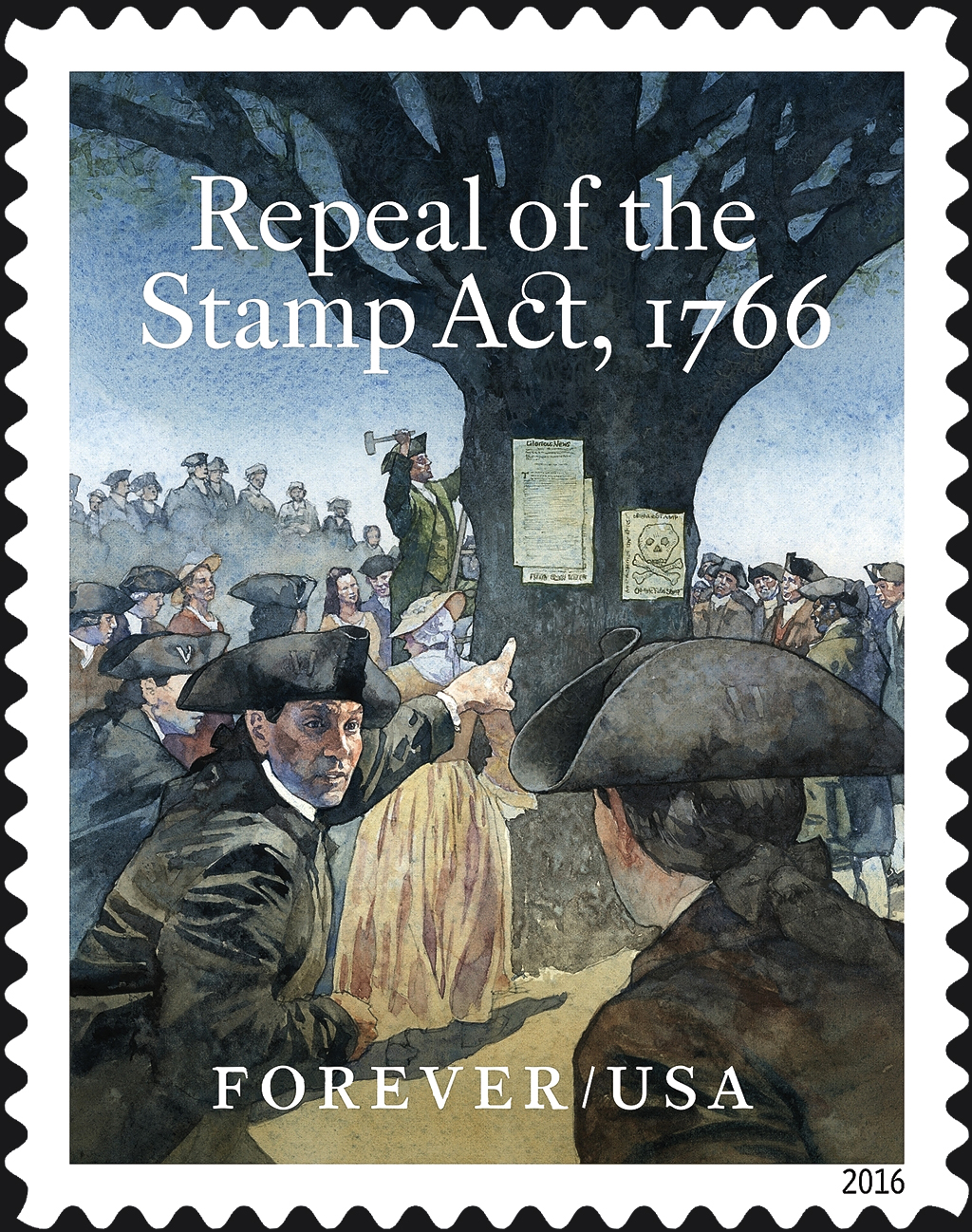 A single forever stamp in 2016 will commemorate the 1766 repeal of the Stamp Act. 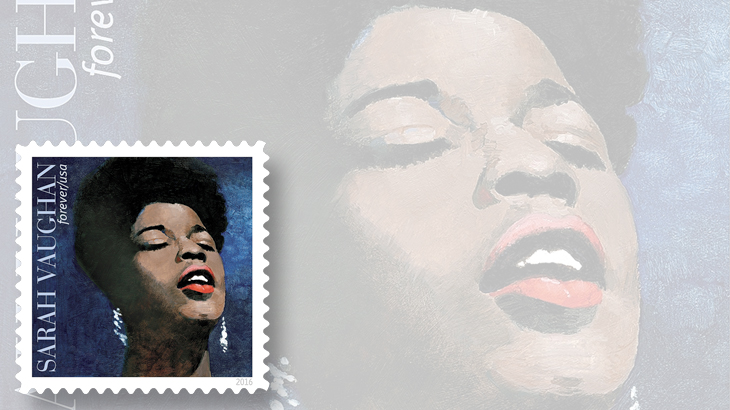 Jazz and pop singer Sarah Vaughan will be honored on a Music Icons commemorative forever stamp in 2016. 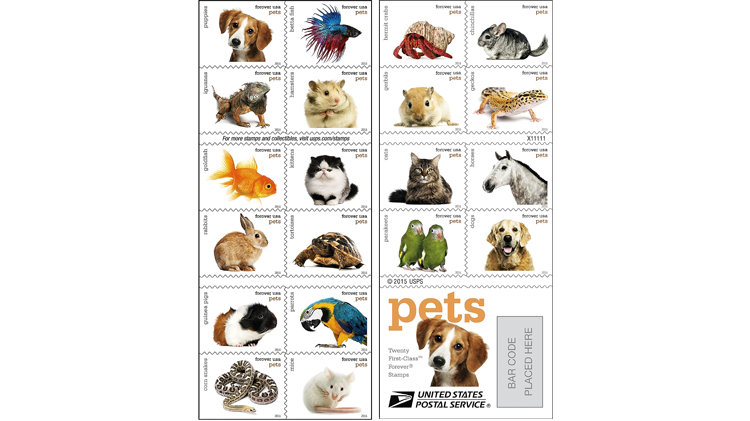 Photographs of 20 popular pets will be featured on United States stamps to be issued in 2016. 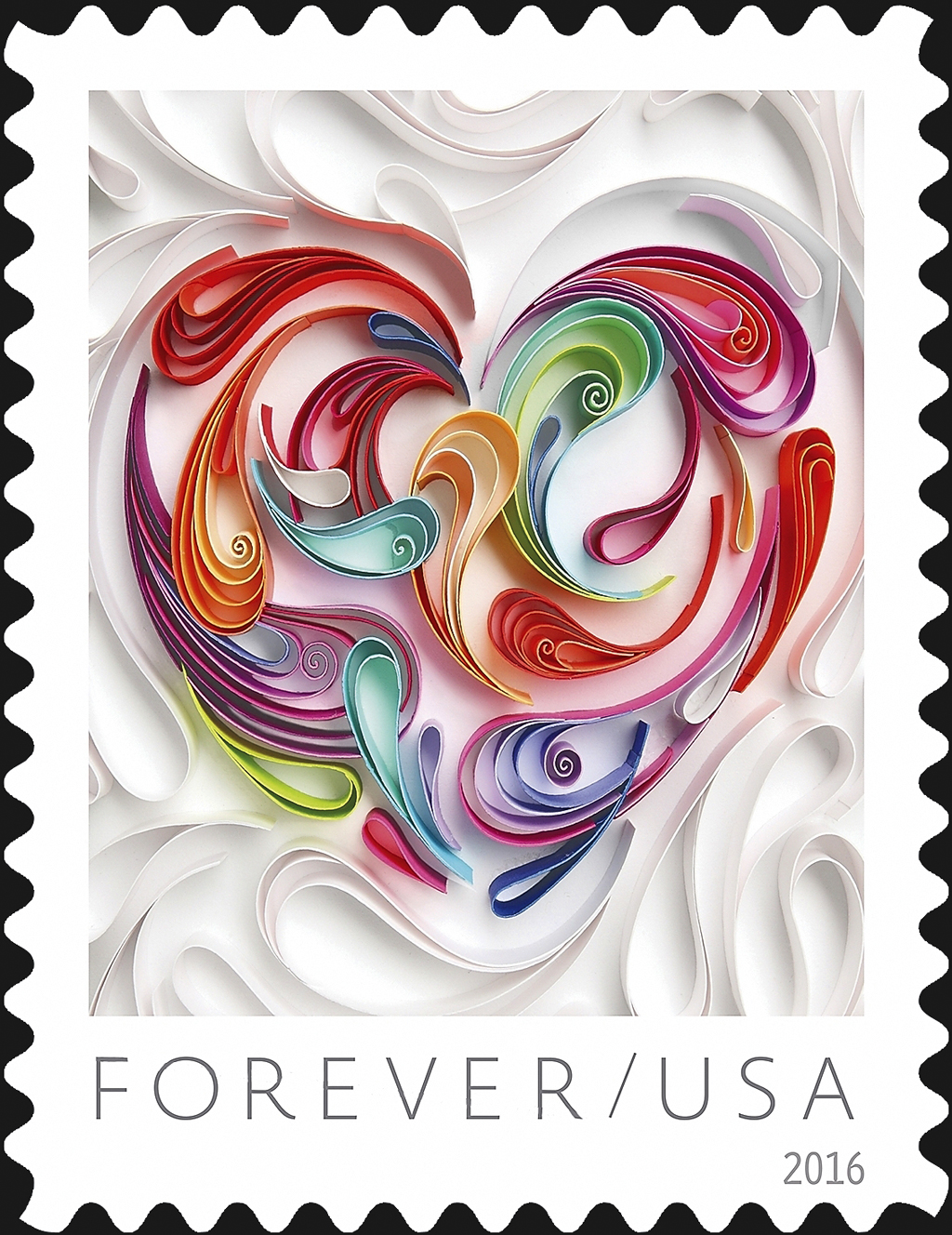 A new Love stamp will be issued early in 2016. The colorful stamp design by Yulia Brodskaya is created from quilled paper to represent the shape of a heart. 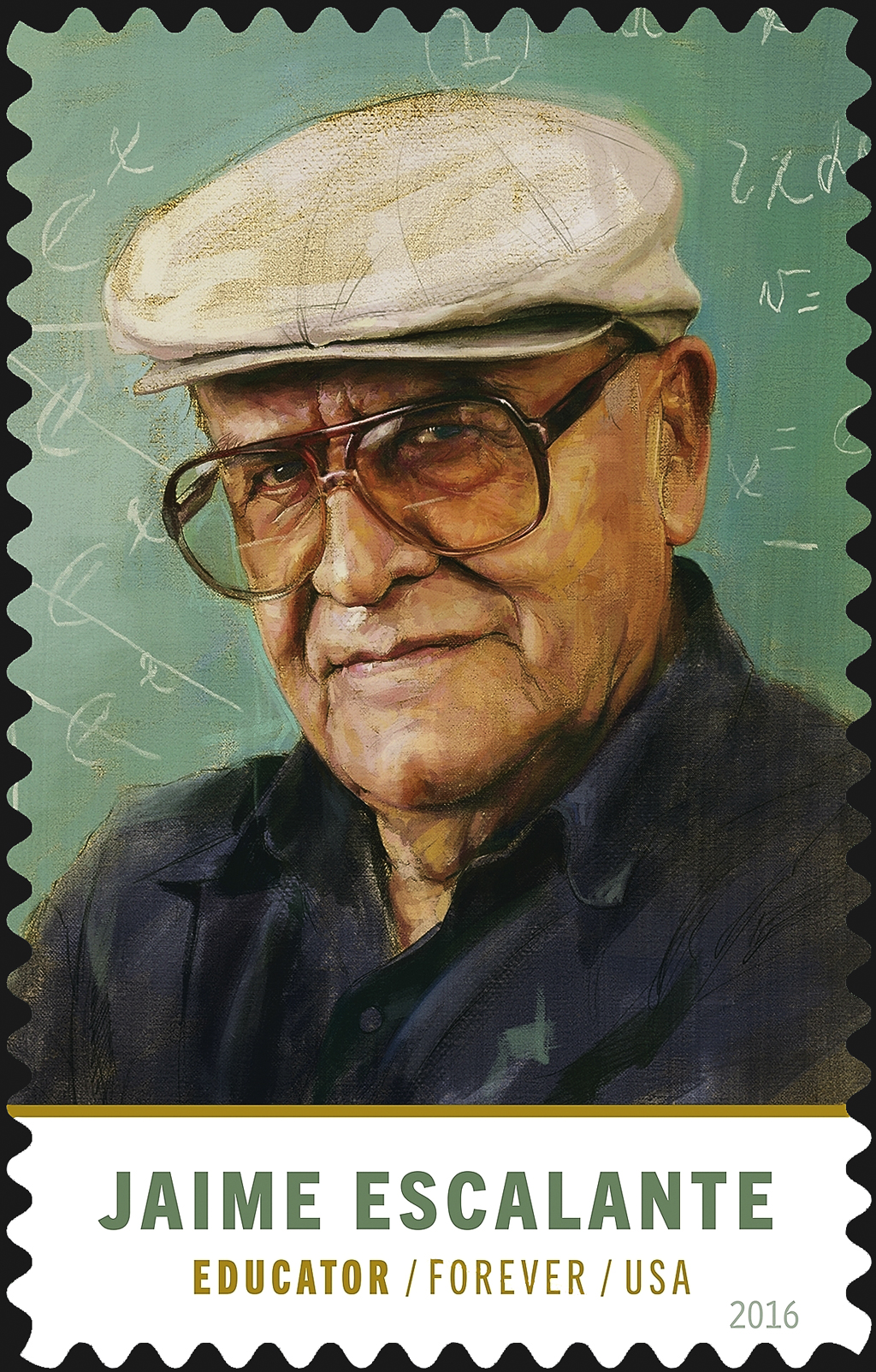 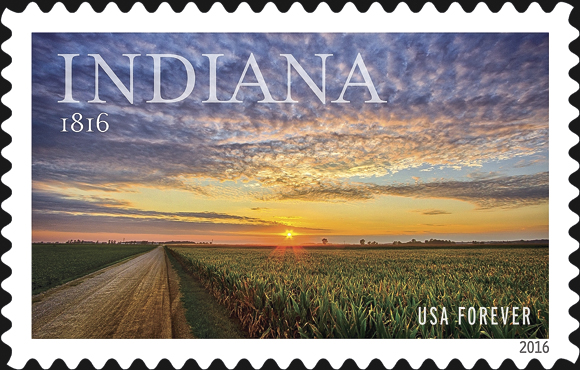 The bicentennial of Indiana statehood will be celebrated in 2016 with a stamp showing a sunset scene, photographed by Michael Matti. 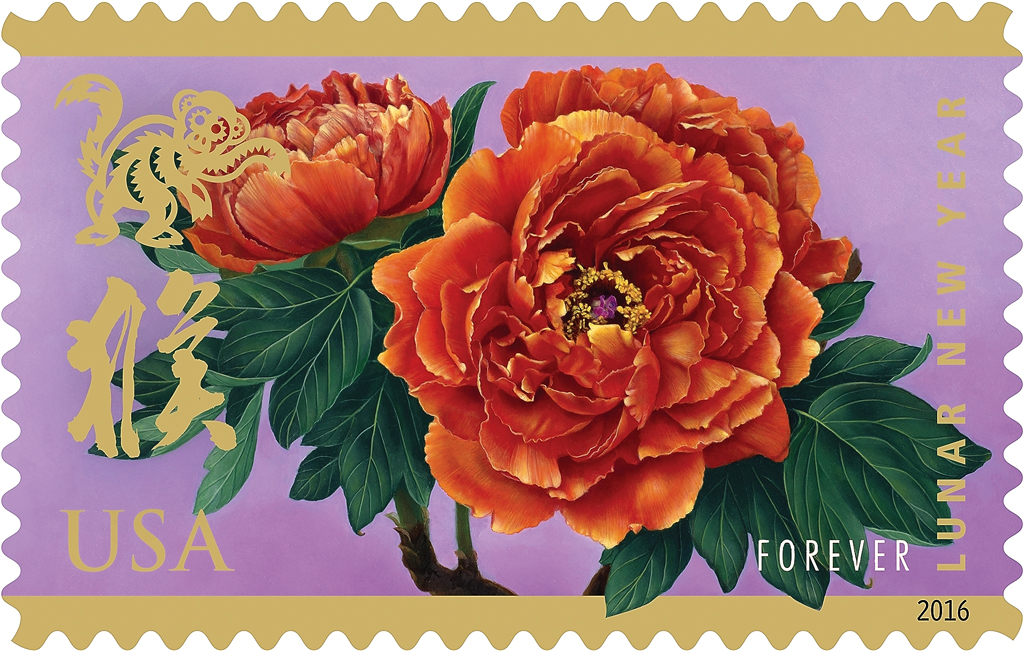 A new forever stamp in the ongoing Happy New Year series is expected in January 2016. The flowers in the central design are peonies. 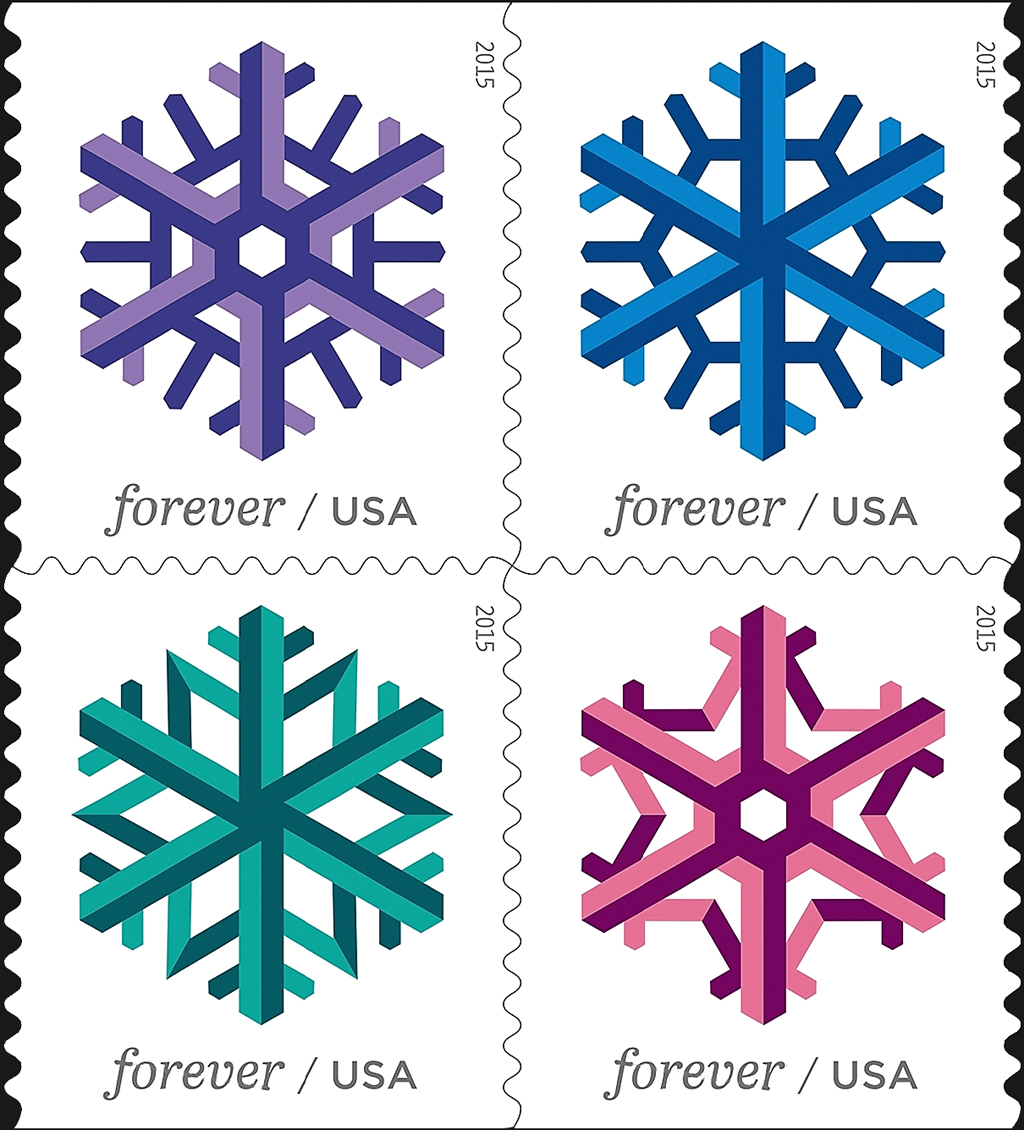 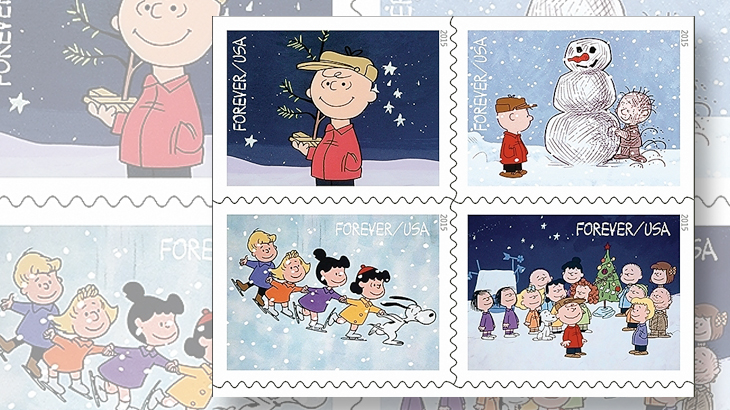 Four of the 10 different A Charlie Brown Christmas forever stamps that will be issued Oct. 1.

A set of 10 Botanical Art stamps will be issued in a double-sided pane of 20 in 2016. The designs reproduce details of illustrations in vintage nursery catalogs. 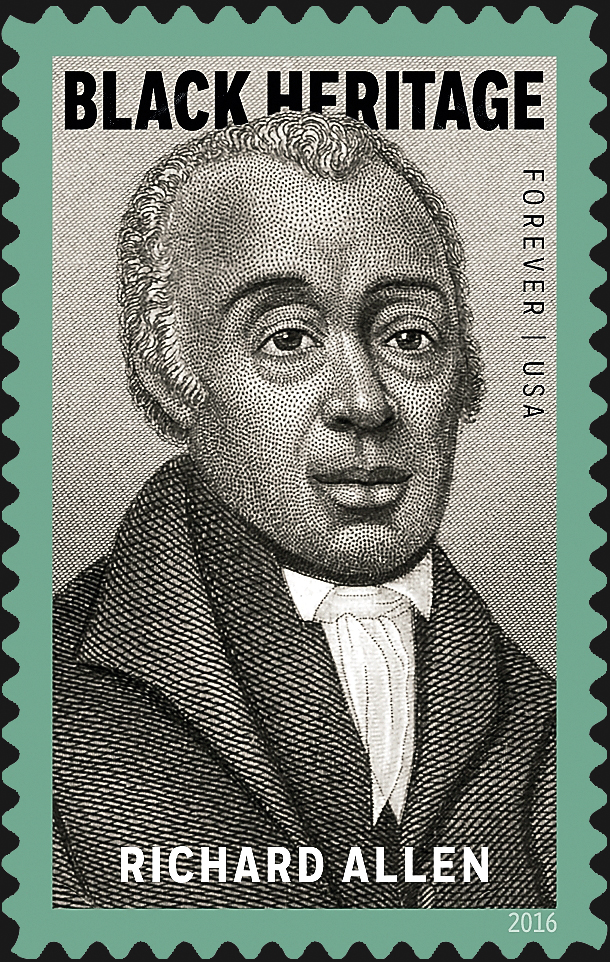 The 10 different designs of the A Charlie Brown Christmas stamps to be issued Oct. 1. Each design will appear twice in the double-sided pane of 20 forever stamps.
Previous
Next

It looks like it’s going to be a Charlie Brown Christmas after all.

The United States Postal Service has confirmed that a set of 10 Christmas stamps featuring scenes from the 1965 animated television special A Charlie Brown Christmas will be issued Oct. 1.

This year marks the 50th anniversary of the popular program, which Linn’s editorial director Donna Houseman predicted last week would be featured as a Christmas stamp issue this year.

Penner also announced the remaining U.S. stamps scheduled for release in 2015, and the stamps expected to be issued during the first half of next year.

Oct. 23, Geometric Snowflakes. Four designs each showing an enlarged geometric representation of a snowflake. These forever stamps will be issued in a double-sided pane of 20.

2015, date unknown, Neon Celebrate. A new issue of the forever stamp previously issued in 2011 (Scott 4502); Penner noted that the forever and year-date inscriptions are repositioned on the new stamp.

Penner introduced 10 additional stamp issues that will appear in 2016. No specific issue dates were revealed for these stamps, though most are designated as either first quarter (January, February, March) or second quarter (April, May, June) issues.

2016, January, Year of the Monkey. A horizontal commemorative forever stamp similar to previous issues in the Happy New Year series, with artwork by Kam Mak. The stamp, showing peonies, will be issued in a pane of 12.

2016, first quarter, Quilled Paper Heart. A single Love forever stamp in a pane of 20 with a multicolor heart design created of quilled paper: thin paper strips rolled and shaped that are glued into place on one edge.

2016, first quarter, Richard Allen. The 2016 forever stamp in the Black Heritage series will commemorate preacher, activist and civic leader Richard Allen (1760-1831). The stamp, in a pane of 20, coincides with the 200th anniversary of Allen’s founding of the African Methodist Episcopal (AME) Church.

2016, first quarter, Sarah Vaughan. Jazz and pop singer Sarah Vaughan (1924-90) will be commemorated on a forever stamp in the Music Icons series, with 16 stamps in the full pane.

2016, first quarter, Botanical Art. Ten different floral designs will be issued in a double-sided pane of 20. Each stamp shows a detail of an illustration that appeared in an American nursery catalog between 1891 and 1912.

2016, second quarter, Indiana Statehood. A single forever stamp celebrating 200 years of statehood for the Hoosier State, with an illustration by Indiana photographer Michael Matti of cornfields near Milford, Ind., at sunset.

2016, second quarter, Repeal of the Stamp Act in 1766. Another issue associated with the World Stamp Show-NY 2016 will mark the 250th anniversary of the real of the Stamp Act, “British legislation that galvanized and united the American colonies and set them on a path toward revolution.” The stamps will be issued in a pane of 10 with the image of a one-penny revenue stamp proof print.