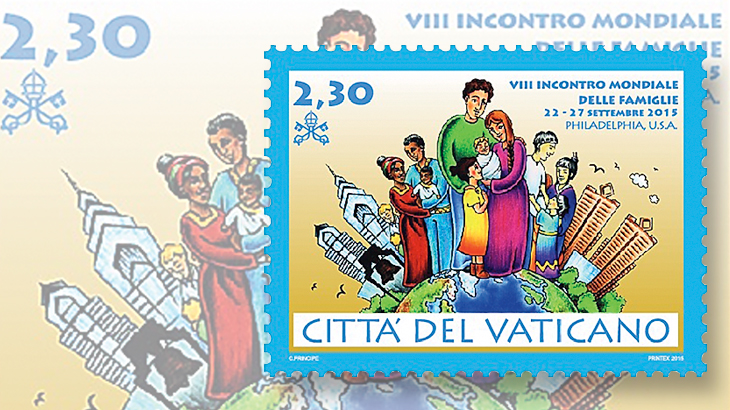 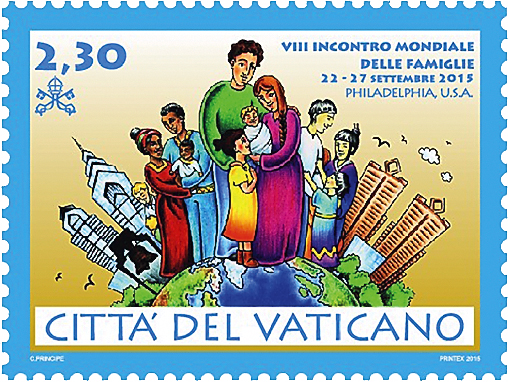 The Liberty Bell is pictured on the left side of the globe on the Vatican City stamp marking the eighth World Meeting of Families to take place Sept. 22-25 in Philadelphia. 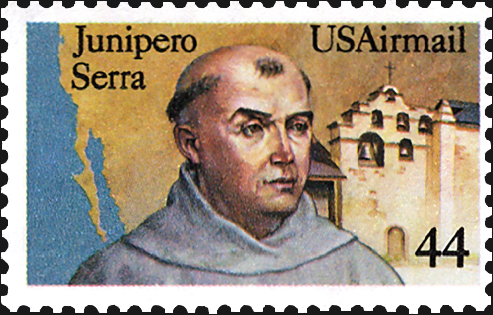 The United States Postal Service issued this 44¢ Father Junipero Serra airmail stamp Aug. 22, 1985. He will be canonized by Pope Francis Sept. 23.
Previous
Next

Vatican City will issue a stamp Sept. 2 commemorating the eighth World Meeting of Families to take place in Philadelphia. The congress will be held Sept. 22-25, followed by the Festival of Families Sept. 26.

Pope Francis will visit the United States Sept. 22-27 in conjunction with the meeting, and will be in Philadelphia Sept. 26-27.

The Liberty Bell and buildings of Philadelphia are pictured on the 2.30 stamp for the World Meeting of Families.

The new-issue announcement from Vatican City’s philatelic and numismatic office describes the design as showing “three families of different ethnic groups on a globe, and in the background a skyline of Philadelphia skyscrapers with the city’s famous Liberty Bell, a symbol most often associated with the American Revolution. On 8 July, 1776, the sound of that bell was said to have brought out the citizens of Philadelphia to hear the reading of the Declaration of Independence from Great Britain.”

Although the Vatican City press release does not specifically identify the buildings in the background, they appear to be One and Two Liberty Place on the left, and One and Two Commerce Square on the right.

Italian artist Chiara Principe designed the stamp. Printex of Malta printed it by offset in sheets of 10.

The website for the meeting in Philadelphia provided this brief background information: “Since its inception by Saint John Paul II in 1994, the World Meeting of Families has strengthened the sacred bonds of families across the globe.

“Held every three years and sponsored by the Holy See’s Pontifical Council for the Family, the World Meeting of Families is the world’s largest Catholic gathering of families.

While in the United States, Pope Francis also will visit Washington, D.C., and New York City. He will meet with President Barack Obama (Sept. 23), canonize Father Junipero Serra (Sept. 23), address a joint session of the U.S. Congress (Sept. 24), and address the United Nations General Assembly (Sept. 25), among other events.

Serra, an 18th-century Spanish missionary, established eight missions in California. He is pictured with one of these, the San Gabriel Mission, on a U.S. 44¢ airmail stamp issued Aug. 22, 1985 (Scott C116).

For more information on the Vatican City’s World Meeting of Families stamp, visit the Vatican City website, send an e-mail to order.ufn@sca.va, or write to the Philatelic and Numismatic Office, Governatorato, 00120 Vatican City.