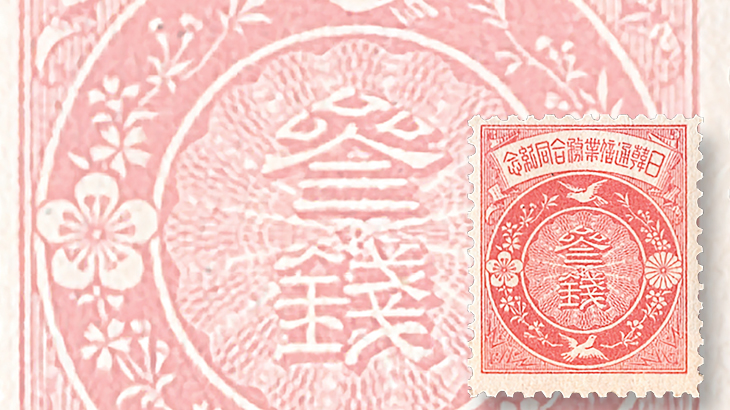 For use only within Japan, Korea and parts of China, the 1905 stamp marking the amalgamation of the postal systems of Japan and Korea had no English or Arabic text, but it did have deep symbolism.

Japan’s nearest neighbor to the west, the peninsula of Korea, is about 120 miles away, across the Strait of Korea. The two countries engaged in diplomatic and trading exchanges as early as the third century, and Korea was the conduit to Japan for many elements of Chinese culture, including food and religion.

A treaty in 1876 launched the efforts to make Korea economically and politically part of the Japanese empire, and early in the 20th century, Japan accelerated the maneuvering to dominate its small neighbor.

The Japan-Korea Treaty of February 1904, which declared itself to be, “For the purpose of maintaining a permanent and solid friendship between Japan and Korea,” and to “definitively guarantee the independence and territorial integrity of the Korean Empire,” eliminated restrictions on Japan’s military actions on the peninsula.

The Japan-Korea Treaty of November 1905 seized Korea’s diplomatic rights and reduced the country to being a Japanese protectorate. Some sources describe the evolving relations between the two entities at that time as “increasing efficiency and sharing resources” and others call it “dissolving Korean sovereignty.”

A booklet on Japanese postage stamps published by the Japan Travel Bureau in 1962 (third edition) as part of a series for tourists describes the 1904 and 1905 agreements as efforts to “bring about a closer relationship between the two countries.”

Japan established post offices in Korea in November 1876, and Korea organized its own postal system in 1884. The two separate systems operated from 1884 to 1905.

During the Russo-Japanese War of 1904 (in which Korea declared itself neutral), Japan expanded its communications network in Korea, adding military field post offices and military communications points.

In the 1998 English edition of Korean Postal History 1884-1905, by Meiso Mizuhara (1924-93), renowned philatelic expert in China and Korea, the author quotes numerous instances of military interference in the operations of the Korean postal system in 1904. These included military censorship of mail and telegrams in certain post offices and sometimes actual occupation by soldiers, who barred postal employees and the public from access.

With little notice or discussion, an agreement was signed on April 1, 1905, “supported by the Imperial Japanese Military forces,” according to Mizuhara, that transferred the post, telegraph and telephone services of Korea to Japanese control.

“Japanese call that [the agreement] ‘the unification of Japan-Korea communications,’” wrote Mizuhara, but it was “agreement by threat,” and made “the present writer tremble in shame.”

Writing in Japanese Philately, Vol. X, No. 4, 1955, on the 50th anniversary of the transfer, Robert M. Spaulding, Jr., reported that Korea had 385 post offices and Japan had 63 at the time of the turnover, and as of July 1, 1905, all offices in the country came under “a single administration controlled entirely by Japan.”

An Ordinance of the Ministry of Communications dated June 26, 1905, announced the issuing of a new stamp on July 1 “for the amalgamation of Japan-Korea communication services.”

The 3-sen stamp would be for use on postal matter sent within or between Japan, Korea and China (within the limit of Imperial Japanese post offices there).

Korean postage and postal stationery would be removed from sale on June 30, though stamps and stationery already sold would be valid until Aug. 31, 1909.

The stamp (Japan Scott 110) was designed by Sekko Hihata (pen name of Shotaro Hihata, 1858-1943), who was an artist with the Japan Communications Museum of the postal administration.

The stamps were printed by typography in rose-red ink on white, unwatermarked paper, in sheets of 100 stamps (10 by 10).

Because the stamps were permitted for domestic use only, the English-language and Arabic-numeral wording required for international mail were absent. The customary “Imperial Japanese Post” inscription also was absent.

The face-value denomination of 3 sen appears in the center ring of the vignette, and the scroll at the top of the design, in what Mizuhara described as “ten Chinese seal characters written from the right,” reads “Commemorating Amalgamation of Japan-Korea Communication Services.”

Given the ingrained importance of symbolism in Asian culture, the decorative elements of this stamp are worth close examination.

In the double-circled ring surrounding the denomination are a pigeon or dove facing left at the top, and one facing right at the bottom. Mizuhara calls these symbols of both communication and peace. In the bottom corners of the stamp are jagged drawings of lightning, symbolizing the telegraph.

At the midpoint of the left side of the ring is the plum blossom crest of the Korean imperial family, and at right is the 16-petal chrysanthemum of the Japanese imperial family.

Mizuhara wrote that this placement of the chrysanthemum was “extraordinary,” because the imperial family’s crest always appeared in a place of honor: either the center or the upper-middle of postage-stamp designs.

The balance of the two symbols appears to indicate the equality of the new “union,” but another part of the design says differently. The fine webbing in the center of the circles, behind the denomination, is an example of guilloche, such as appears on early British stamps, starting with the 1840 Penny Black.

Guilloche is an intricate, repetitive design produced by a machine called a rose-engine lathe, which would create a pattern that was then transferred to the die for the printing plate of the stamp, after which the remainder of the design was added. The technique usually is employed for line-engraved stamps, not as part of typographic issues.

Guilloche patterns made stamps difficult for others to forge, as well as adding attractive visual effects to them. In the case of the 1905 Japan-Korea stamp, the rose engine added a geometric pattern that is yet another Imperial Japan 16-petal chrysanthemum.