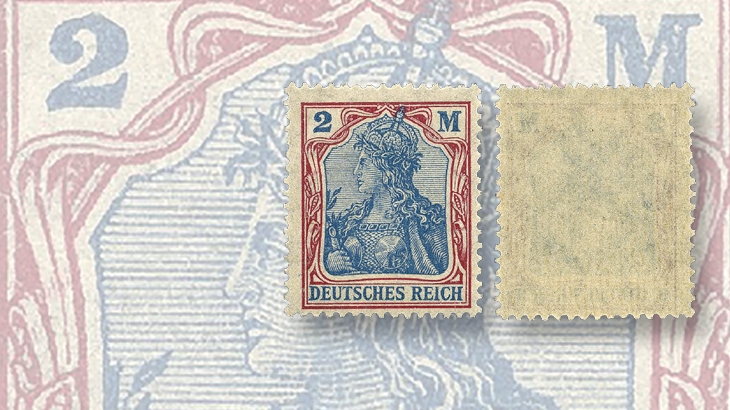 The quatrefoil watermark on this 2-mark Germania stamp from Germany distinguishes it as a rare issue. It sold for about $65,500 in the Nov. 27-28 Aix-Phila auction in Aachen, Germany.

One of the things keeping the stamp hobby vibrant and exciting is the continuous discovery of new varieties, even on stamps that are nearly a century old.

Oftentimes, these developments happen in the area of postal history, when some new trove of old correspondence comes to light. But at other times, it is the stamps themselves that offer up something novel, especially in the case of watermarks, which many collectors simply never bother to check closely — until they do.

Two examples of recently discovered rare watermark varieties were offered at auction last November and December: one in Germany and the other in New York City.

Aix-Phila of Aachen, Germany, is one of 80 to 100 active stamp-auction firms in that country. It has been run by the same team since 1987 and holds two auctions a year, in May and in November.

Its Nov. 27-28, 2015, sale was previewed on the front page of Linn’s issue of Nov. 23. The standout item was a newly discovered watermark variety on a Germany 2-mark Germania definitive stamp of 1920.

The normal (and quite common) 2m stamp, with a watermark consisting of a continuous pattern of lozenges, is listed in the Scott Classic Specialized Catalogue of Stamps and Covers 1840-1940 as Scott 131, with a value in unused condition of 60¢, rising to $2.25 if the gum has never been hinged.

A very small quantity of the 2m stamp was printed, presumably in error, on paper with a watermark of repeating quatrefoils, which resemble little diamond-shaped clouds. The quatrefoil paper was intended for revenue stamps, not postage. Another stamp in the Germania series, the 1¼m, exists with the same paper variety and is listed as Scott 210. That stamp is scarce, but not rare.

Until now, just three examples of the 2m on quatrefoil paper were known, all used. An unused example, so far unique, was discovered by a German collector earlier last year, after having lain in his collection for many years. It is not yet listed in Scott, although the Michel Deutschland-Katalog has it as Michel 152Y.