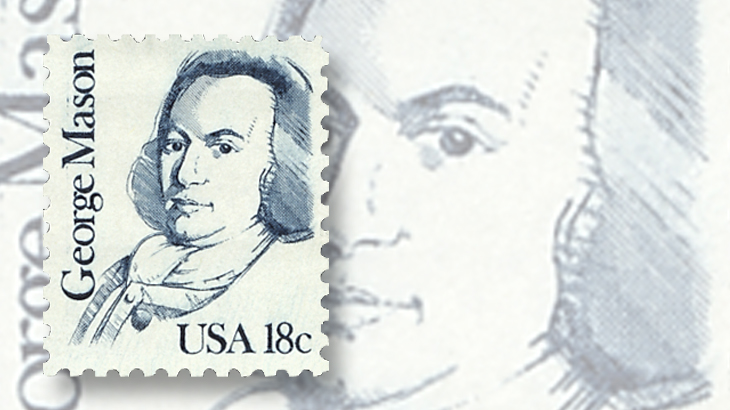 American patriot George Mason was honored on an 18¢ definitive stamp in 1981.

George Mason was a delegate and active participant in the Constitutional Convention that took place in Philadelphia in 1787. A distinguished American patriot, he was a proponent of individual rights who composed the Virginia Declaration of Rights in 1776, a document consulted by James Madison when he drafted the first 10 amendments to the U.S. Constitution, known as the Bill of Rights.

Mason was born in the Virginia colony on Dec. 11, 1725, the son of a prominent landowner, George Mason III, and his wife, Ann.

George Mason IV was taught by tutors during much of his childhood. His father died when young George was just 10 years old, and as an adult Mason inherited land from his family and studied law, becoming a member of the Virginia House of Burgesses in 1759, and the second Virginia Convention in 1775.

At the Constitutional Convention, Mason became concerned about the extent of the power bestowed upon the federal government, the office of the president, and the federal courts, and he campaigned for greater recognition of individual rights. Holding true to his beliefs, he refused to sign the Constitution, and his objections led to the development of the Bill of Rights in 1791.