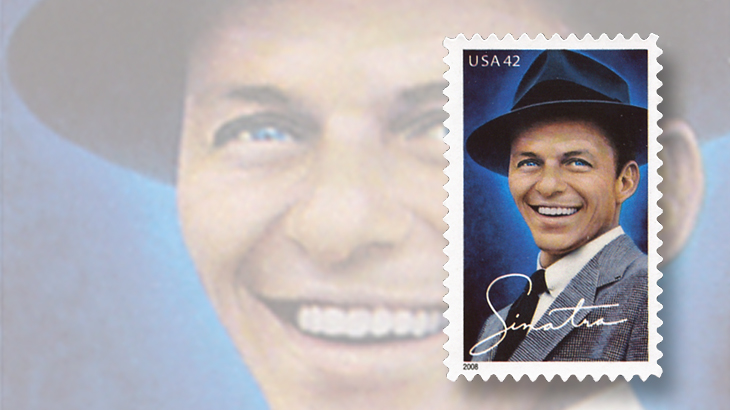 Entertainment superstar Frank Sinatra is commemorated on a 42¢ stamp issued May 13, 2008.

He was an actor, producer, director and songwriter, but most of all he was one of the world’s best known popular vocalists. And today is the 100th anniversary of his birth.

After a short stint with a vocal group calling themselves the Hoboken Four, Sinatra began singing on radio shows, and had a recording session with trumpeter Harry James in 1939.

Sinatra next signed on with the popular Tommy Dorsey band and recorded regularly with the group. Determined to find success as a solo artist, he left Dorsey in 1942 and signed with Columbia Records.

Sinatra’s star was rising fast, and his singles for Columbia sold quickly. He began appearing in feature films in the 1940s, and released his first solo album, The Voice of Frank Sinatra, in 1946.

He would later record for Capitol Records before forming his own successful Reprise label. He performed in Las Vegas beginning in the 1950s, and his friendships with entertainers Dean Martin, Sammy Davis Jr., Peter Lawford and Joey Bishop developed into an informal brotherhood popularly known as the Rat Pack, appearing together on stage and in feature films.

Sinatra became an icon of the entertainment industry, enjoying worldwide fame as an Oscar-winning movie star and one of the biggest selling recording artists of all times.

The stamp liner includes this text: “Frank Sinatra (1915-1998) is admired worldwide as a supreme interpreter of American popular song. Several of his recordings — including In the Wee Small Hours and Come Fly With Me — are considered classics. Sinatra also demonstrated outstanding acting ability in films such as From Here to Eternity and The Manchurian Candidate.”