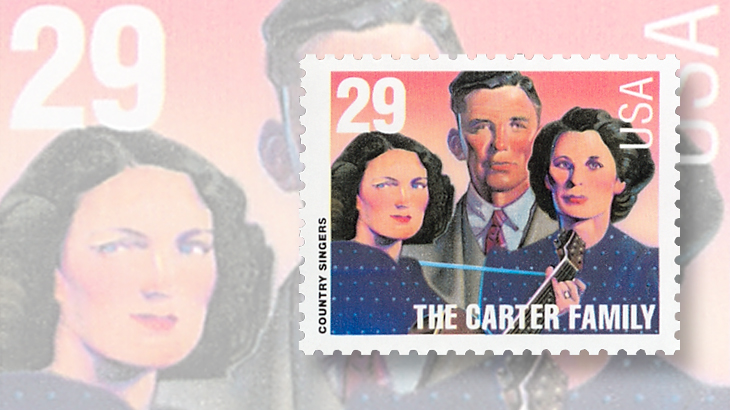 A.P. Carter is shown in the center of the 29¢ Carter Family commemorative stamp issued in 1993.

Alvin Pleasant Carter, known as “A.P.,” is a leading figure from the earliest years of country music. He was the patriarch of the Carter family and collected and arranged traditional folk songs that the group performed and recorded.

A.P. was born Dec. 15, 1891, in Maces Spring, Va., near the Tennessee border. His parents were hard-working farmers who played and sang folk tunes, and A.P. began singing and playing at an early age.

He married a young singer named Sara Dougherty in 1915, and the couple often performed together locally, with A.P. on the fiddle and Sara on autoharp.

In 1927 they were joined by Sara’s sister-in-law, Maybelle Addington, who played guitar with a self-developed style known today as "the Carter scratch.”

A.P. traveled extensively in Appalachia, learning more tunes and developing them with Sara and Maybelle into new arrangements that combined elements of gospel and folk music. Their performances and recordings set the stage for country music as a new American music genre. Among their signature songs were Wildwood Flower, Keep on the Sunny Side, I’m Thinking Tonight of My Blue Eyes, and Can the Circle Be Unbroken.

A.P. and Sara divorced in 1936, but the group continued to record and perform together for several more years. A.P. left the music business in 1943 but continued to collect royalties while operating a country store in Virginia. He died in 1960.

When 29¢ sheet and booklet stamps honoring the Carter Family were issued in the American Music series on Sept. 25, 1993 (Scott 2773 and 2776), A.P. was featured in the center of the design, with Maybelle at left and Sara on the right.