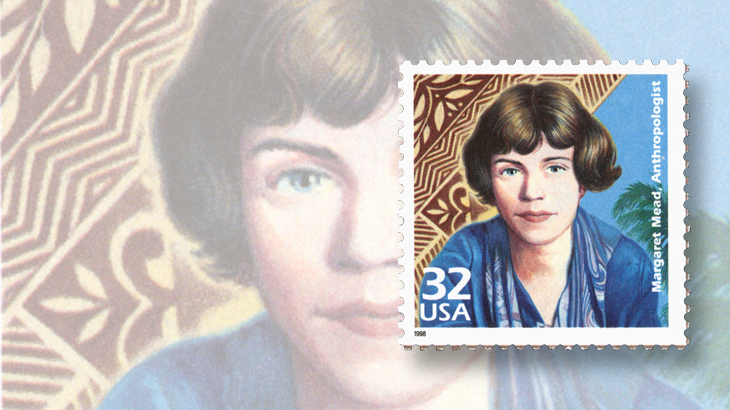 Anthropologist Margaret Mead was honored on a 32¢ stamp in 1998 as part of the Celebrate the Century series.

Anthropologist Margaret Mead was born Dec. 16, 1901, in Philadelphia, Pa., the first child of two social scientists and educators. She was primarily home-schooled by her paternal grandmother, Martha, a former schoolteacher.

Mead studied at DePauw University for one year before transferring to Barnard College in New York City, where she received her bachelor’s degree. She studied anthropology at Columbia University, earning her master’s degree in 1924, and became an assistant curator at the American Museum of Natural History in New York City.

The following year, at age 24, Mead traveled to Samoa for several months of field research. The end result was her book Coming of Age in Samoa, a study of Samoan culture with attention to the effect of Samoan society on the psychology and sexual behavior of adolescents. Her findings supported the importance of culture as a factor shaping human behavior.

Mead’s work was both popular and controversial, and has been attacked and defended over the course of almost 90 years since its initial publication.

She went on to conduct other studies in other cultures and wrote several books and numerous popular articles, easily becoming the most famous anthropologist in the world.

On the back of the stamp is this inscription: “Anthropologist Margaret Mead explored the effect of culture on the behavior and personalities of children and adults, as well as the differences between men and women."