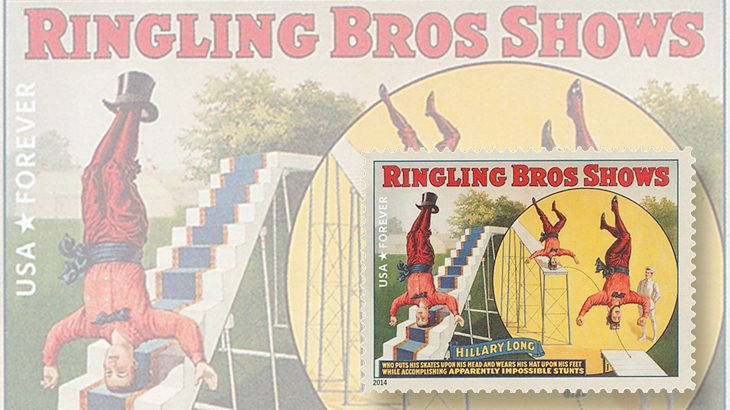 Charles Ringling was one of five Ringling brothers who together created shows for public entertainment. The Ringling Bros. are commemorated on this Circus Posters forever stamp from 2014.

Charles Edward Ringling was born Dec. 2, 1863, in McGregor, Iowa, the fifth child of eight siblings: seven brothers and the youngest, a sister.

Their mother, Salome, was born in France, and their father, August, was from Hanover, Germany. The family settled in Baraboo, Wis., where August owned a saddlery business.

Impressed at a young age when the circus came to town, five of the brothers, including Charles, were determined to create their own entertainment enterprise, beginning with a small music and comedy troupe in which Charles played violin and trombone. Launched in 1882, the group performed in neighboring Wisconsin towns.

The traveling show evolved into a circus by 1884, and continued to grow each year. By 1907 the show was so successful that the brothers purchased the rival Barnum & Bailey Circus. Twelve years later the two circuses combined to become the Ringling Bros. and Barnum & Bailey Circus. Charles, known as “Mr. Charlie” to employees, headed up circus production.

Charles and John Ringling ran the circus for many years. Charles also became involved in developing real estate in Sarasota, Fla., and with his wife constructed a residence known as the Edith Ringling Estate. He also established a bank and donated land that would serve as the county seat.

Charles died Dec. 3, 1926. The Ringling Bros. and Barnum & Bailey Circus continues to operate today, billed as it has been for many years as “The Greatest Show on Earth.”

When the United States Postal Service issued its set of eight Circus Poster forever stamps on May 5, 2014, five of the stamps featured incarnations of the Ringling Bros. and Barnum & Bailey circuses (Scott 4898-4905).