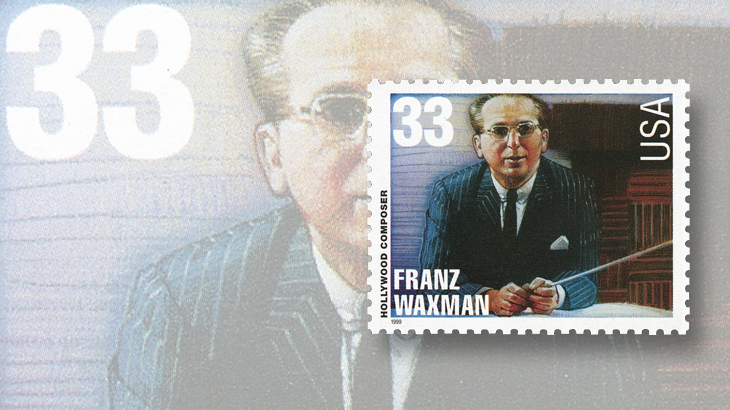 Franz Waxman, a leading composer of film and television scores from the 1930s into the 1960s, was born Dec. 24, 1906, in Koenigshuette, Silesia, then part of the German Empire, and now the city of Chorzow in Poland.

Waxman studied music in Dresden and later at the Berlin Music Conservatory. After working as a nightclub pianist in Europe and creating music for a handful of German movies, he moved to Hollywood in the 1930s and began scoring films for Universal Studios.

In 1935, he created music for James Whales’ The Bride of Frankenstein. That same year, Diamond Jim included music by Waxman and Ferde Grofe, who appeared on a 32¢ Legends of American Music stamp in 1997 (Scott 3163).

Waxman’s music was featured in 1937’s Captains Courageous, and he won Oscars for Sunset Boulevard (1950) and A Place in the Sun (1951), receiving 12 nominations during his career.

A 33¢ stamp honoring Franz Waxman was issued Sept. 16, 1999 (Scott 3342), as part of the six-stamp set honoring Hollywood composers in the Legends of American Music series.