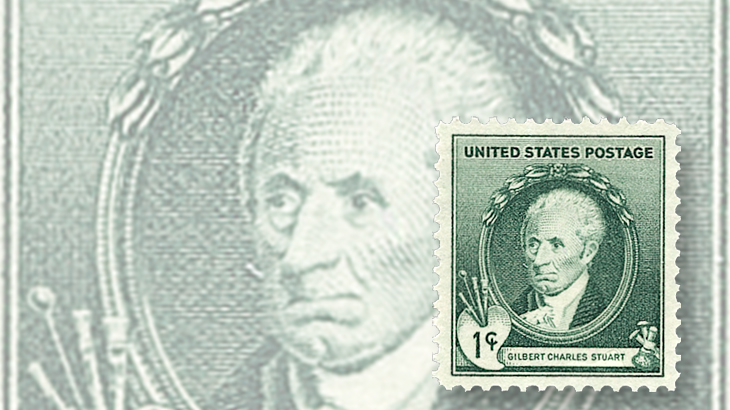 Gilbert Stuart, the artist known for his famous portrait of George Washington, was featured on a 1¢ stamp in 1940.

Gilbert Charles Stuart’s portraits of America’s founding fathers have been featured on a great number of United States stamps.

Stuart, a master portrait artist, was born Dec. 3, 1755, in Saunderstown, R.I. As a teenager he studied portraiture with Scottish artist Cosmo Alexander. Living in England at age 20, Stuart next studied under Benjamin West, and began exhibiting at the Royal Academy.

Though he found success in his career, Stuart’s financial situation was often dire, and in 1793 he returned to the United States, eventually opening a studio near Philadelphia, Pa.

Within two years he painted his most famous subject, President George Washington. Washington sat for Stuart three times, and the second sitting produced a famous painting known today as “The Athenaeum.” It is the same portrait reproduced on the U.S. $1 bill, the 12¢ gray-black stamp of 1851 (Scott 17), and numerous other stamps, including the 20¢ definitives issued April 11, 2011 (4504 and 4512).

Stuart was himself depicted on a 1¢ stamp issued Sept. 5, 1940, in the Famous Americans series. The portrait of the artist is based upon a miniature painting by Sarah Goodridge (1788-1853).