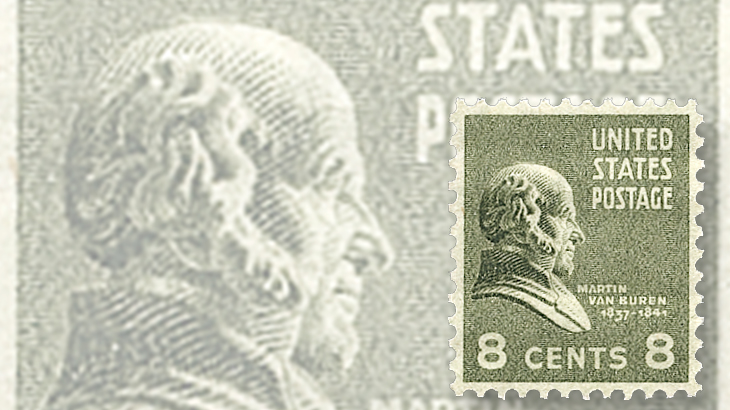 The eighth president of the United States, Martin Van Buren, on the 8¢ stamp in the 1938 Presidential series.

Martin Van Buren, the eighth president of the United States, was born Dec. 5, 1782, in Kinderhook, N.Y., a predominantly Dutch community. His parents were both of Dutch ancestry, and his father, Abraham, was a tavern keeper who served as a captain in the Revolutionary War.

Martin attended school until age 15, and then studied law with a local attorney. He was admitted to the New York bar in 1803 and established his law practice in Kinderhook, later moving it to Hudson.

He married Hannah Hoes in 1808, and they had five sons together (one died as an infant). Hannah died in 1819 at age 35 after contracting tuberculosis. Van Buren never remarried.

Van Buren was involved in local politics prior to his election to the New York Senate in 1812. He was the state’s attorney general from 1816 to 1819 and was elected to the U.S. Senate two years later.

He became governor of New York in 1828 but resigned the next year to join President Andrew Jackson’s cabinet as secretary of state.

Jackson relied heavily on Van Buren as an advisor and selected him as his vice president for his second term.

Just three months after Van Buren succeeded Jackson as president, the prosperity enjoyed by the nation suddenly vanished with the panic of 1837, aggravated in part by financial measures Van Buren had supported. The debilitating economic depression that followed became an issue used by the Whigs and William Henry Harrison to defeat Van Buren’s re-election efforts.

An antislavery Democrat, Van Buren was a presidential hopeful in 1844 and 1848, but failed to win back the office. In his later years he supported Abraham Lincoln and the preservation of the Union. He died July 24, 1862.