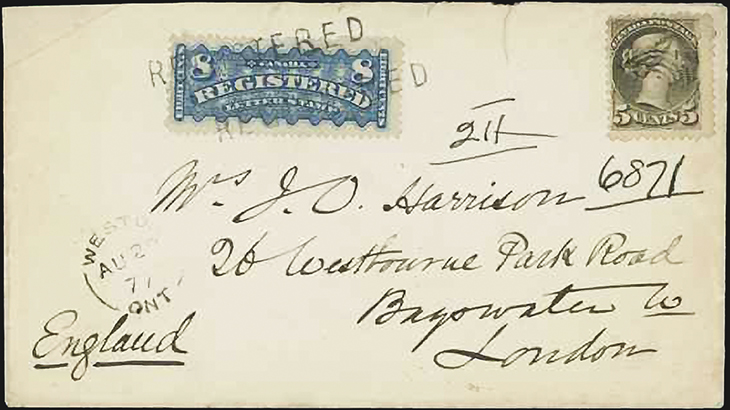 An 1877 cover with the 8¢ denomination of Canada’s registered letter stamps of 1875-88 sold for $17,200 at Eastern Auctions’ auction in October. Only 16 covers are known with one of the 8¢ stamps paying the short-lived 8¢ registration fee.

An imperforate, tete-beche strip of two Canada 2¢ King Edward VII booklet panes of six was sold by Eastern Auctions in October in Halifax. Only one imperforate sheet is known, and this imprint block is one of only two known. It sold for the equivalent of US$30,100. 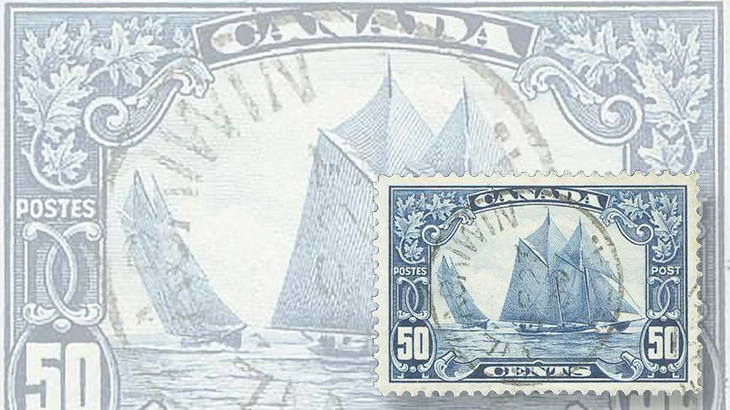 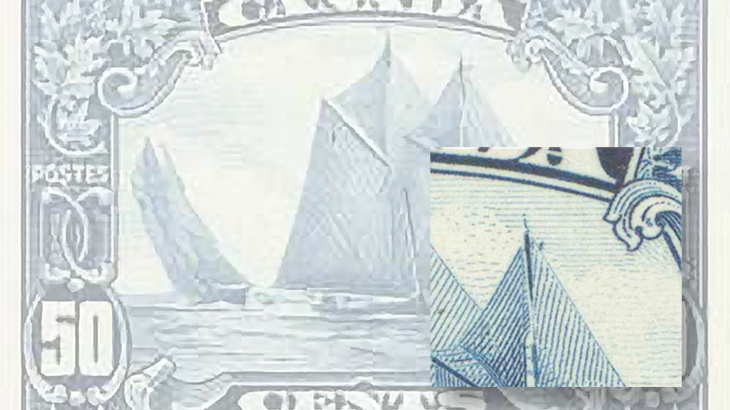 This close-up of the “man on the mast” plate flaw reveals its resemblance to a sailor on the rigging. A tiny nick in the plate caused an extra spot of color above the right-hand sail. 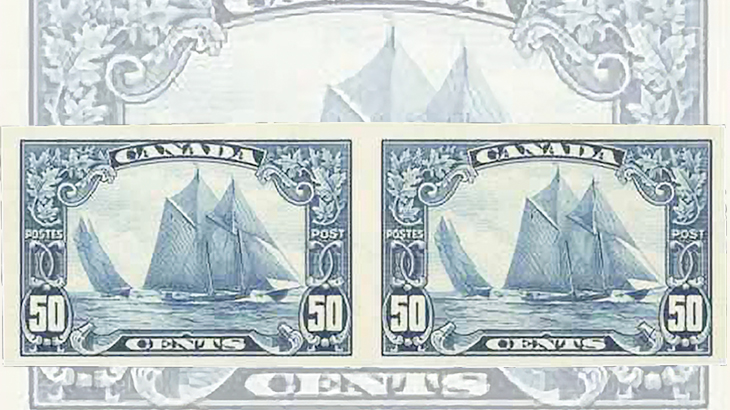 An imperforate pair of Canada’s 1929 Bluenose definitive with the elusive “man on the mast” plate flaw on the right-hand stamp sold for about $13,750 at Eastern Auctions’ sale in October. 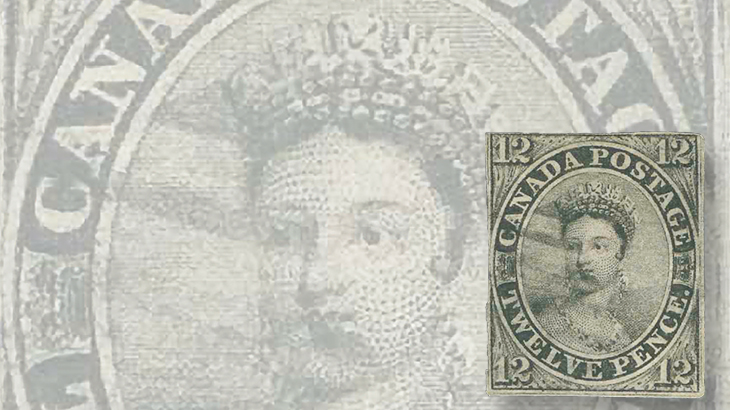 Eastern Auctions’ sale in Halifax in October included an example of the scarce Canada 1851 12-penny Queen Victoria stamp on handmade laid paper. It was hammered down for $25,000 Canadian, or about US$21,500.
Previous
Next

Eastern Auctions, based in Bathurst, New Brunswick, held a sale of Canada and British North America stamps and postal history on Oct. 23-24 in Halifax, Nova Scotia.

An example of the scarce and sought-after Canada 12-penny Queen Victoria stamp of 1851 on handmade laid paper (Scott 3), with a very light cancellation and respectable margins on two sides, was described as “an affordable stamp.” It was hammered down for $25,000 Canadian, or about US$21,500, including the 15 percent buyer’s premium added by Eastern to all lots.

An extraordinary imperforate, tete-beche strip of two King Edward VII 2¢ booklet panes of six (Scott 90c) — 12 stamps in all, with the rightmost six inverted — included the top margin showing the imprint “Ottawa — No. —.”

Only one imperforate sheet, which had been submitted to Canada’s postmaster general for approval, found its way onto the market. The 28 booklet panes on the sheet were arranged in two columns, with an imprint at the top of each column, making this strip in the Eastern sale one of two such imprint blocks in existence, and the only one without faults.

Hailed as “the cornerstone to a gold-medal collection of the King Edward VII issue,” the booklet-pane strip sold for the equivalent of US$30,100.

The sale included a lengthy run of what many consider Canada’s most beautiful stamp of all time, the 50¢ “Bluenose,” a 1929 pictorial definitive showing the schooner of that name (Scott 158), including numerous imperforate multiples, part-perforate pairs, and mint and used singles.

This stamp is frequently found off-center, and a beautifully centered example with a light, socked-on-the-nose circular date stamp sold for $240, several times its catalog value.

The elusive “man on the mast” Bluenose plate flaw was represented by multiple lots in the sale. This flaw consists of a tiny nick in the plate that resulted in an extra spot of color above the right-hand sail, resembling a tiny sailor atop the rigging. It occurs on position 58 of plate 2.

An imperforate pair, with the right-hand stamp showing the flaw, sold for about $13,750.

Canada’s registered letter stamps of 1875-88 were represented by a number of proofs and multiples, as well as some nice postal history. A neat registered cover sent from Weston, Ontario, to London, England, in August 1877 was franked with a 5¢ Small Queen (Scott 38) and the key 8¢ registry stamp in bright blue (Scott F3a).

The 8¢ registration fee applied for only a brief time, and just 16 covers have been counted bearing Scott F3 (dull blue) or F3a used during the proper period from 1876-77. The cover in the Eastern sale represents the latest of these, and sold for some $17,200.