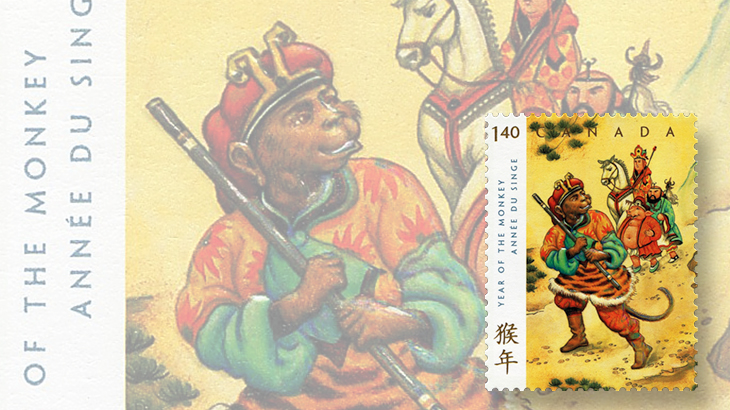 Also on Jan. 11, Canada Post will issue stamps celebrating the Year of the Monkey. This $1.40 stamp came from the souvenir sheet issued by Canada in 2004 (Scott 2016). 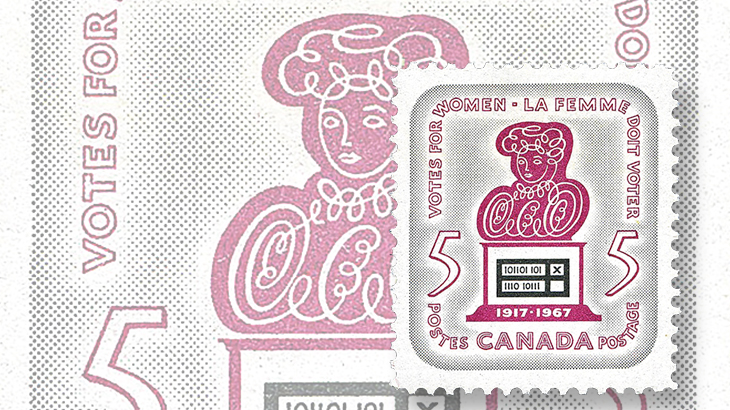 This 1967 5¢ Votes for Women stamp (Scott 470) marked the first time some women were permitted to vote in Canada’s federal elections. In 2016, Canada will commemorate the centennial of women’s suffrage with an issue on March 8. 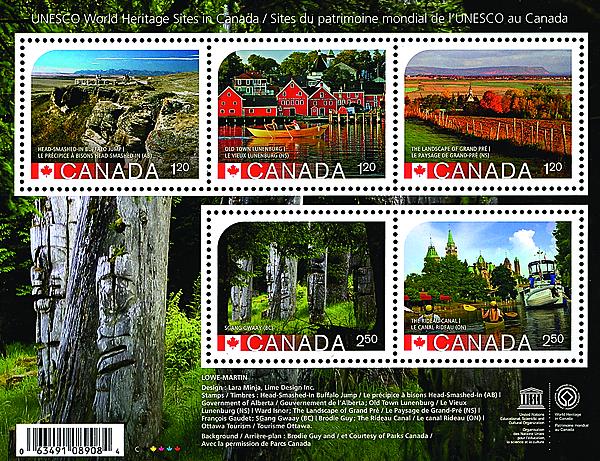 Paying $1.20 and $2.50 for international mail from Canada, the five designs in this 2014 souvenir sheet showing UNESCO World Heritage sites in Canada (Scott 2739) will be recycled as domestic letter-rate stamps, part of a Jan. 11 blizzard of issues coming from Canada Post. 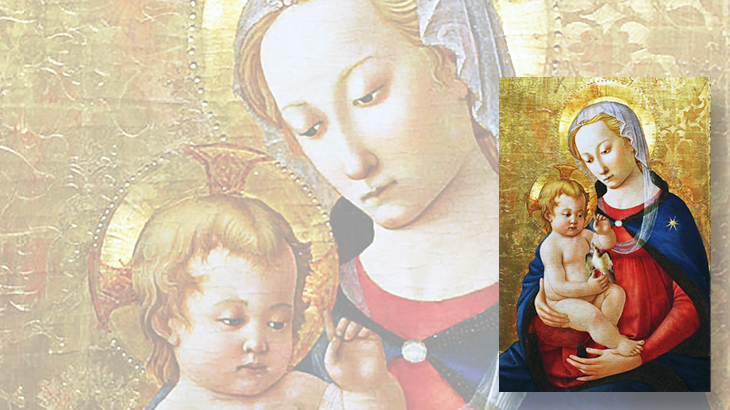 Canada’s domestic-rate 2016 Traditional Christmas stamp will feature this panel painting, Virgin and Child, by a 15th-century Italian artist, a gift from by Renata and Michal Hornstein to the Montreal Museum of Fine Arts. Original photograph by John Covert. 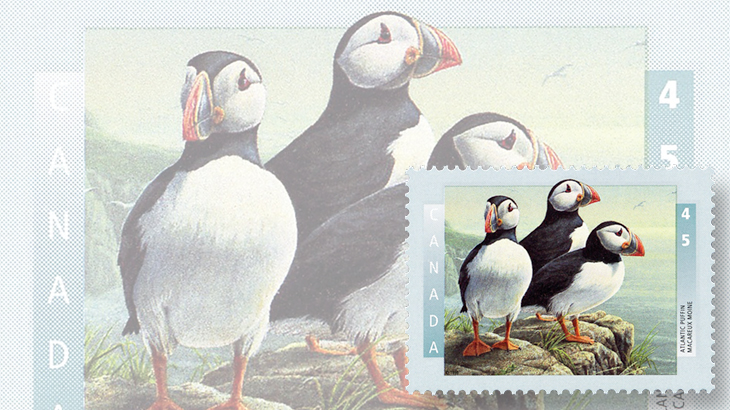 Canada Post will kick off 2016 on the second Monday in January (Jan. 11) with an estimated 14 stamps, including multi-stamp installments in two continuing series, a five-stamp inaugural release in a new series of Birds of Canada, and a new definitive depicting Queen Elizabeth II.

The biggest surprise of this multi-stamp Monday may be the return of old designs in new denominations. The sites pictured on five $1.20 and $2.50 UNESCO World Heritage booklet and souvenir stamps issued May 16, 2014, (Scott 2739-44) will be back as nondenominated (85¢) permanent-rate stamps.

Many collectors will recall the 1996-2001 Birds of Canada series that included three dozen stamps issued in four designs each year, moisture-activated in 1996-98 and both moisture-activated and self-adhesive for the remainder of the run. Shown here is the 1996 45¢ Atlantic puffin from this handsome series (Scott 1592), which also included stamped envelopes.

The new series will exclusively use birds that are official symbols of Canada’s 10 provinces and three territories. However, there is likely to be an as-yet-unknown bird pictured in the final installment in this series in 2017.

Canada is currently voting for its favorite bird in Canadian Geographic’s National Bird Project, which appears to be open to everyone in the United States as well, at www.canadiangeographic.ca/nationalbird.

The goal of the project “is to help designate an official bird for Canada by 2017, the country’s sesquicentennial,” which should be a banner year for philately of all kinds.

On Feb. 1, Canada will issue a Black History stamp to honor the centennial of No. 2 Construction Battalion of the Canadian Expeditionary Force, raised in Halifax, Nova Scotia — the only Canadian unit of black soldiers to serve in World War I.

Blossoming March 1, hydrangeas will join Canada’s annual parade of Spring Flowers, which began in 2002 with four Tulip stamps in a self-adhesive booklet pane (Scott 1946) and a moisture-activated souvenir sheet (Scott 1947).

On March 8, Canada will commemorate its centennial of women’s suffrage. The 50th anniversary of women’s suffrage in Canada was marked in 1967 with the 5¢ Votes for Women stamp shown nearby (Scott 470), which marked the first time that some women were permitted to vote in federal elections in Canada. However, Canada’s prairie provinces of Manitoba, Saskatchewan and Alberta were the first to have allowed all women to vote in their elections and to run for public office as well, early in 1916.

April 13 will see the fourth and penultimate installment of seven designs in Canada’s Photography series, with stamps celebrating the works of seven photographers: Toronto, taken in 1960 by Lutz Dille; Victoria Bridge, circa 1870, by Alexander Henderson; Freighter’s boat on the banks of the Red River [Manitoba], 1858, by Humphrey Lloyd Hime; Window, 1988, by Angela Grauerholz; La chamber noir, 2005-10, by Michel Campeau; Climbing Mt. Habel, 1903-42, Byron Harmon; and the striking portrait of Grey Owl, 1936, by Yousuf Karsh.

Sept. 8 sees a spooky start to the month with the third and final installment in the Haunted Canada series, with five nondenominated (85¢) permanent rate stamps in a self-adhesive booklet of 10 and a moisture-activated souvenir sheet of five.

This will be followed mid-month by the fourth and final installment in the epic, innovative National Hockey League series, and on Sept. 26 by another semipostal stamp for the Canada Post Community Foundation.

The last currently scheduled Canadian stamps for 2016 are traditional and contemporary Christmas stamps on Nov. 1. The former will be a nondenominated (85¢) permanent-rate stamp depicting the Virgin and Child, a panel painting circa 1460 created by an unknown Italian artist of the era remembered only as the Master of the Castello Nativity. Shown nearby, the painting was a gift from by Renata and Michal Hornstein to the Montreal Museum of Fine Arts.

Contemporary Christmas stamps will pay the rates for holiday mail around the world: a Santa stamp paying Canada’s permanent domestic-rate; a Christmas Tree stamp paying the rate to the United States; and a Dove paying the basic international-letter rate.

Canada Post also has promised some 2016 “surprise” stamps to keep Canada collectors on their toes throughout the coming year.