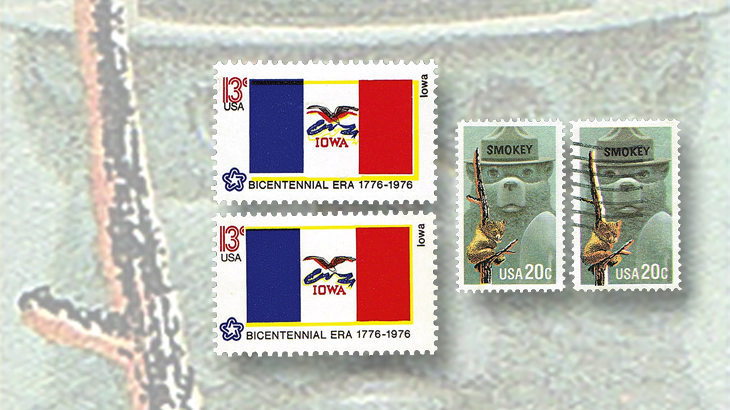 Color misregistrations can alter stamp designs, as illustrated by the two stamps shown here. At left (top) is the 1976 Iowa state flag, with a “double eagle,” shown with a normal example (bottom). At right are two 1984 20¢ Smokey Bear stamps: a normal exa 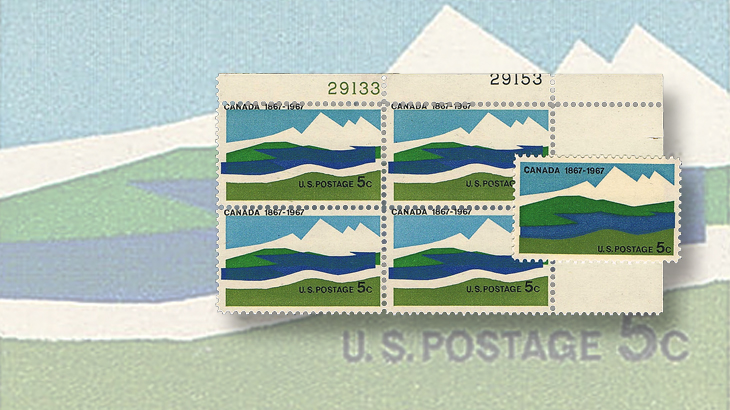 The 1967 Canada Centennial stamps in the plate block have a color misregistration to such a degree that there appears to be a snow field below the dark blue river, and the inscription “Canada 1867-1967” is above the design. A normal example is shown at ri
Previous
Next

Over the last few years, I’ve had two questions come up where the finder thought that a new listing might be in order. In each case, though, the item turned out to be a collectible variety, not a new listing, and the finder was disappointed.

The patients (the stamps being expertized) are shown nearby together with the normal stamps. The patients are the 13¢ Iowa “double eagle” stamp from the State Flags issue of 1976 and the “white tree branch” variety of the 1984 Smokey Bear 20¢ commemorative.

In both instances, what we have is a color misregistration.

On the normal Iowa stamp (Scott 1661, the eagle, which appears to be brown, actually is comprised of several red dots and a few blue dots on top of a black eagle image.

The “double eagle” was caused by the red being shifted down about 1 millimeter, leaving the black and blue in their normal positions. This is a minor printing variety with a major outcome, easily confirmed by looking at how close the bottom of the red vertical bar of the flag is to the black inscription. The red is much closer to the “1776-1976” inscription on the “double eagle” variety than on the normal stamp.

On the Smokey Bear commemorative, the brown and black shading of the tree branch is shifted left, leaving it outside the intended white space where it is properly placed on the normal example.

Color misregistrations are an ever-present hazard of multicolor printing. They exist on the early U.S. bicolor stamps in profusion, but they also often are found on more recent multicolor, multi-process stamps when several plates — sometimes connected to differing printing processes — have been used.

In addition, they are epidemic on certain modern-era U.S. stamps printed when the Bureau of Engraving and Printing was experimenting with new equipment and processes.

In fact, the Canada Centenary stamp is not easy to find in perfect registration. An almost perfect example is shown nearby to the right of the plate block; but even here, the dark blue (intended to represent rivers) is shifted slightly to the right.

On the stamps in the plate block, the dark blue is shifted up 2 millimeters, leaving an additional white strip (maybe snow?) below it.

But that’s not the most unusual outcome. The shifted dark blue is accompanied by the shifted black lettering that was printed by the same plate, causing an unintentional design change. Note that the “Canada 1867-1967” is now above the frame of the design.

But the plate block tells the tale. You can see that the black plate number (which represents the dark blue and black plate) is shifted up.