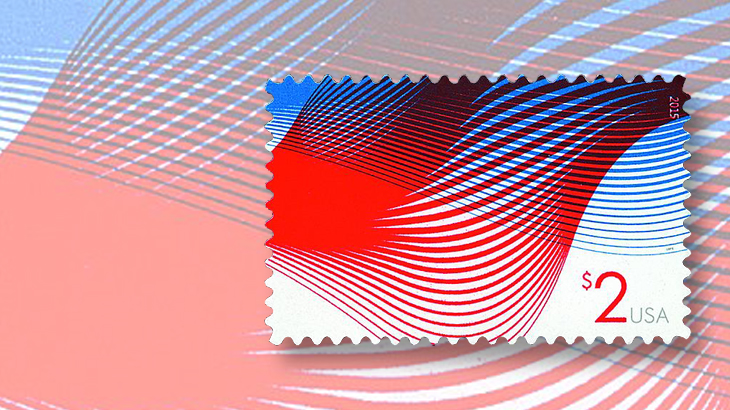 The $2 Patriotic Waves stamp was the most expensive stamp issued in 2015. Because there were fewer high-denomination stamps in 2015, the cost to collect declined significantly. 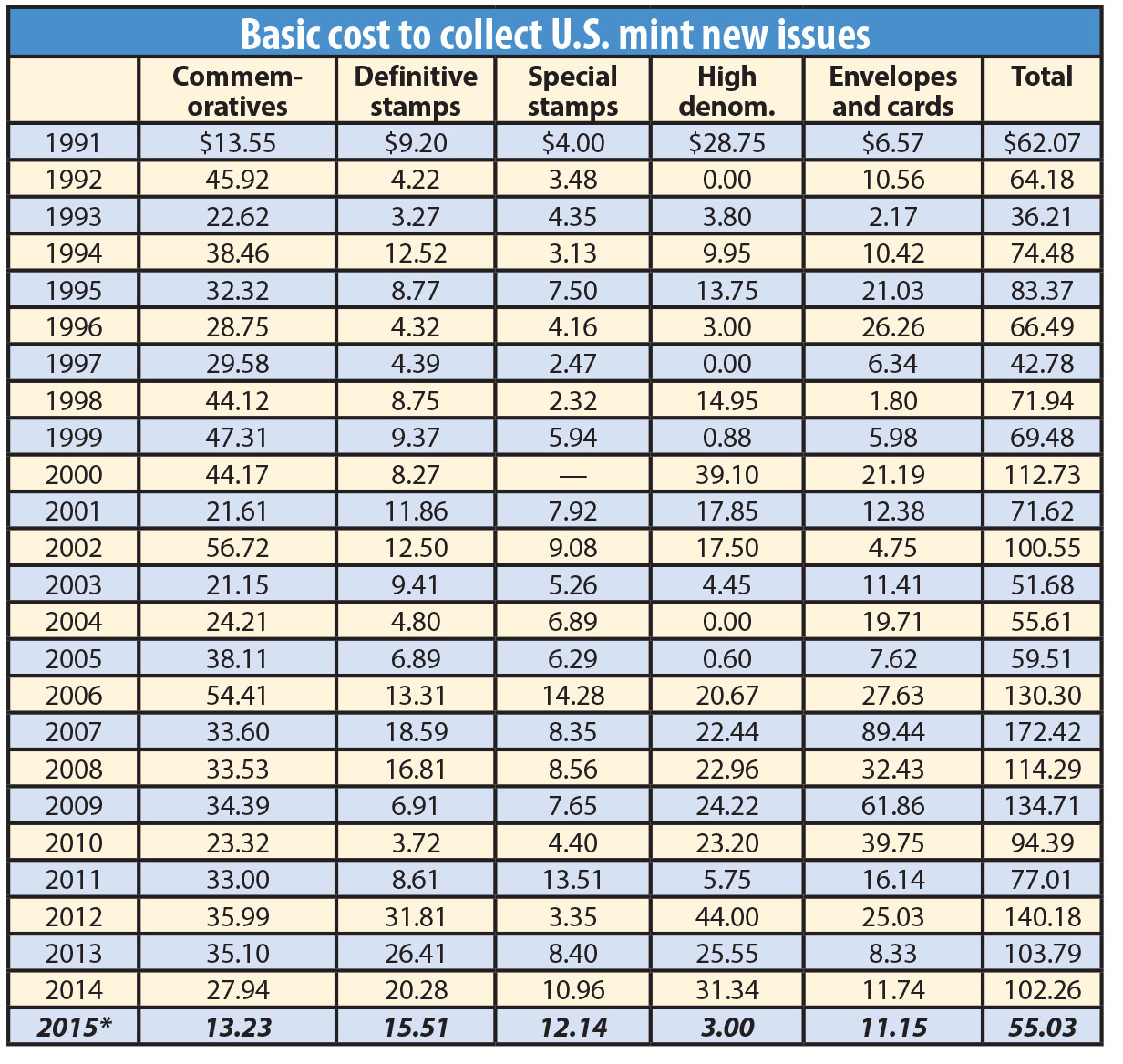 *Costs for 2015 stamps (in bold italics) are projected amounts. Totals include one stamp of each design, plus perforation varieties available when stamps were current. They do not include selvage blocks or panes, tagging or gum varieties, or plate number 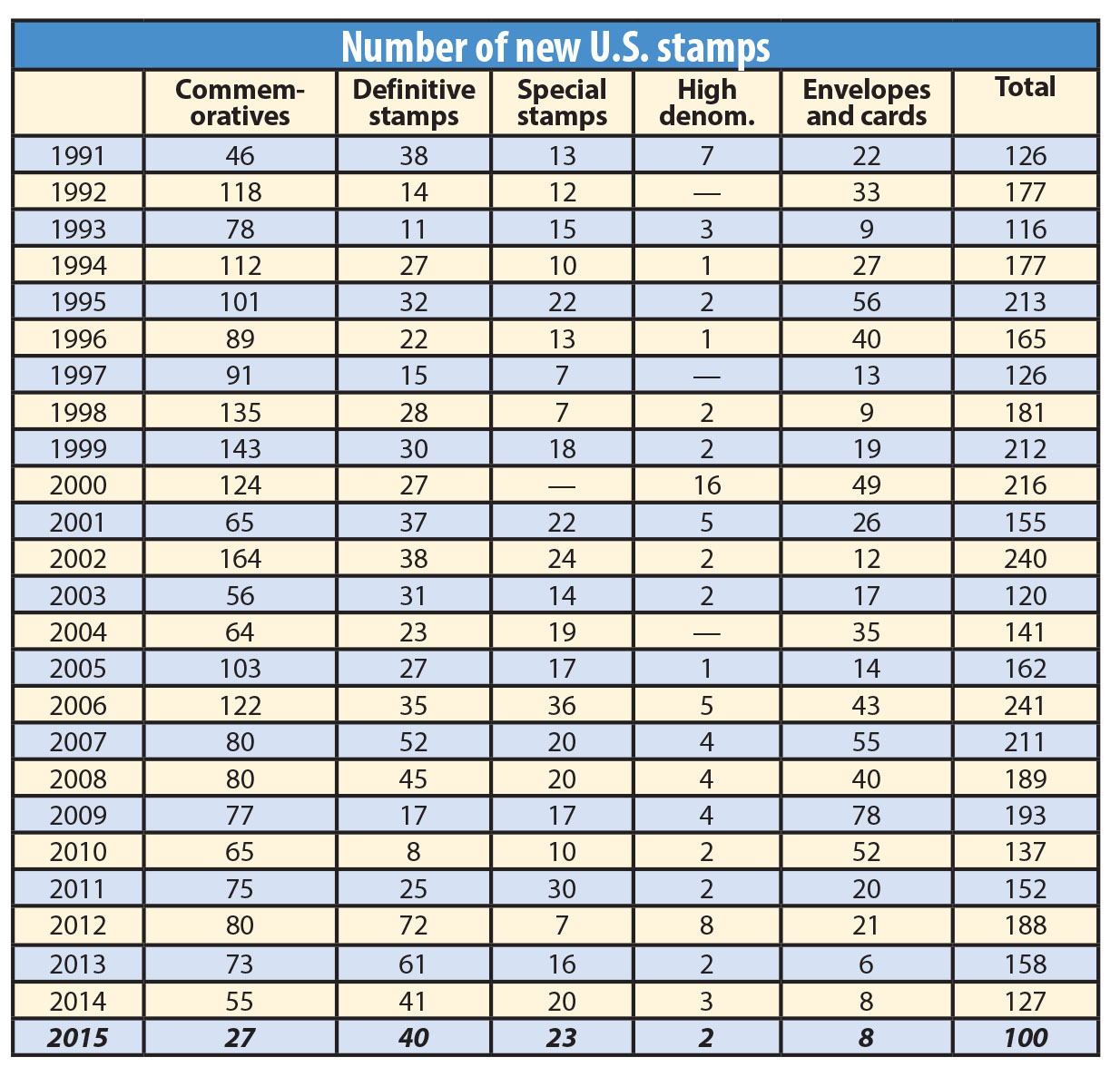 *Numbers for 2015 (in bold italics) are projected and based on information currently available from the United States Postal Service. Totals include one stamp of each design, plus perforation varieties available when stamps were current, but no tagging or
Previous
Next

The cost to collect one each of all of the mint United States postage stamps and postal stationery items issued in 2015 dropped to its lowest level in a dozen years, reaching a dollar value that is nearly half of the cost tabulated for collecting last year.

These totals count individual stamps identified as major varieties by the Scott Specialized Catalogue of United States Stamps and Covers, but for 2015 that projected total also includes the cost of two forever stamped envelopes (Bank Swallow and Folk Art Eagle) and two forever stamps (from the 2015 Medal of Honor issue) not listed as major varieties. Without those four single items included, the total one-of-everything cost for 2015 declines to $52.81.

The 25-year average cost for collecting one of each stamp and postal stationery item issued is $85.88.

The dramatic decrease in this year’s cost total can be attributed in large part to an overall decrease in the number of items issued — 100 in 2015 compared to 127 in 2014 — and the decrease in cost for high-denomination stamps issued, which dropped to $3 this year, compared to $31.34 last year.

In 2014, the Postal Service issued three stamps denominated $5.60, $5.75 and $19.99 for different Priority Mail and Express Mail rates. No new stamps for those mail rates were issued this year. The two stamps listed in the high-denomination category for 2015 are the $1 and $2 Patriotic Waves stamps issued in January.

The total of 100 stamps and stationery items issued in 2015 is the lowest since Linn’s began tracking these costs and totals 25 years ago in 1991. The previous low was 120 stamps in 2003, and the biggest number was 241 just three years later. The reduced number of commemorative stamps again contributed to the change.

One important factor that concerns collectors is that many U.S. stamps cannot be purchased singly from post offices or from the USPS mail order catalog, USA Philatelic, and to obtain a single stamp, a larger multiple has to be purchased. Collectors often must buy a full coil roll or a full convertible booklet pane of 20 to obtain a single stamp, or small set, for example.

To purchase stamps in the smallest possible format in 2015, collectors had to pay an estimated $261.59, which is again less than half of last year’s estimated total of $573.