This cover was sent by Audrey Beller, an economics student who had a clerical job in the Office of Finance, to her hometown friend or relative Sidney Soloway, a student at Harvard University. 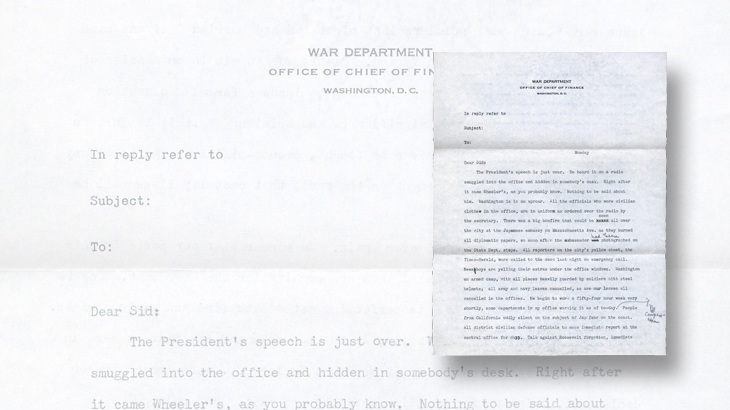 This letter written at Washington, 4,800 miles away from Hawaii, on Dec. 8, the day after the attack on Pearl Harbor, poignantly recorded the effects the Pearl Harbor attack had on people in the nation’s capital city. 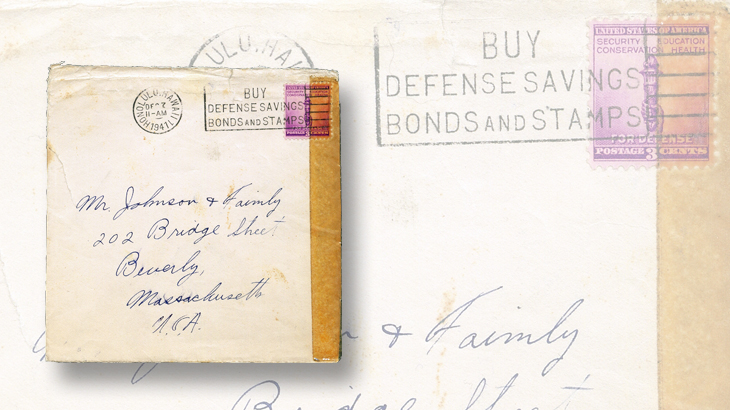 This illustrated small cover, which enclosed a Christmas card, is one of only a handful that were genuinely canceled at Honolulu on December 7, 1941.
Previous
Next

December 7, 1941. On this date 74 years ago, a Japanese surprise aerial attack on United states Navy ships and military installations at Pearl Harbor, Hawaii, brought World War II to America. Surviving mail from that darkest of days serve as reminders of the day that jolted our country out of isolationist complacency and drastically changed everything.

The small cover illustrated above, which enclosed a Christmas card, is one of only a handful I have observed that were genuinely canceled at Honolulu on December 7, 1941. The second wave of Japanese bombers had completed their attack approximately one hour before the 11-AM time shown in the cancel.

A letter written the following day at Washington, 4,800 miles away from Hawaii, poignantly recorded the effects the Pearl Harbor attack had on people in the nation’s capital city. The writer was Audrey Beller, an economics student who had a clerical job in the Office of Finance. The recipient was her hometown friend or relative Sidney Soloway, who was a student at Harvard University.

Beller wrote to Soloway shortly after President Franklin D. Roosevelt had addressed a joint session of Congress to ask for a declaration of war against the Empire of Japan:

The President’s speech is just over. We heard it on a radio smuggled into the office and hidden in somebody’s desk. Right after it came Wheeler’s, as you probably know. Nothing to be said about him [U.S. Senator Burton K. Wheeler]. Washington is in an uproar. All the officials who wore civilian clothes in the office, are in uniform as ordered over the radio by the secretary. There was a big bonfire that could be seen all over the city at the Japanese embassy on Massachusetts Ave. as they burned all diplomatic papers, so soon after the ambassador had been photographed on the State Dept. steps. All reporters on the city’s yellow sheet, the Times-Herald, were called to the desk last night on emergency call. Newsboys are yelling their extras under the office windows. Washington an armed camp, with all places heavily guarded by soldiers with steel helmets; all army and navy leaves cancelled, as are our leaves all cancelled in the offices. We begin to work a fifty-four hour week very shortly, some departments in my office working it as of to-day. No compensation. People from California oddly silent on the subject of the Jap fear on the coast. All district civilian defense officials to make immediate report at the central office for duty. Talk against Roosevelt forgotten, immediate issue war. Dates with soldiers last night sad and worried. …

U.S. Senator Burton K. Wheeler was a New Deal Democrat from Montana, but an anti-Semitic isolationist who had opposed Lend-Lease and all U.S. intervention in the war until the Pearl Harbor attack. He supported the declaration of war by saying, “The only thing now is to do our best to lick the hell out of them.”

Next year will mark the 75th anniversary of Pearl Harbor. No doubt the U.S. Postal Service and veterans’ organizations will commemorate the event with ceremonies and memorial gatherings throughout the land. Collectors who have postal mementoes of the event can help dramatize its significance.