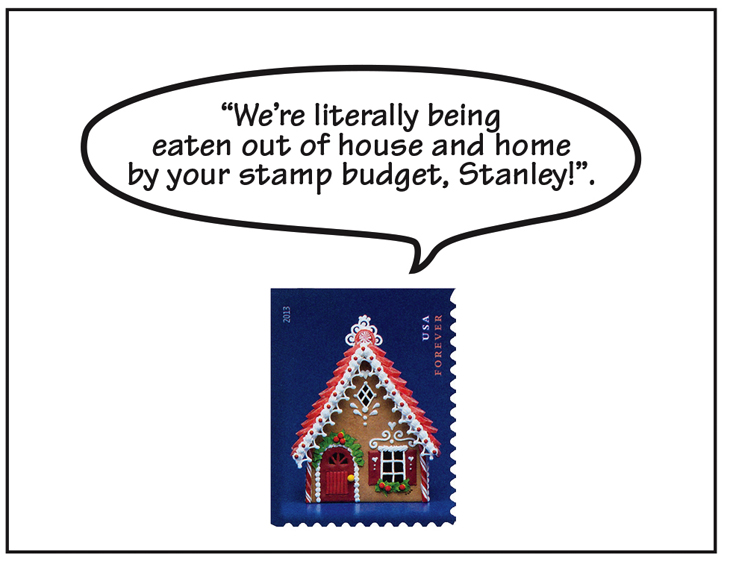 The fact that there are no chimneys on the 2013 Gingerbread House Christmas stamps (Scott 4817-4820) provided a starting point for several readers entering the December cartoon caption contest featuring the Gingerbread House stamp with the red door (4817).

Robert Bialo of Cary, Ill., dealt with this by having the witch say, “Santa will have to eat his way in!”

Harry Miller of Summit Hill, Pa., took another approach, suggesting that a note reading “Dear Santa, Front door is unlocked. Sorry, No chimney!” be posted on the roof.

Gingerbread houses are sweet edibles, and that led many entrants to send in some version of this line from M. Denis of Bridgeview, Ill., “AHHH! Home ‘Sweet’ Home!!! … Really.”

Hansel and Gretel received a lot of attention, and figure prominently in the nonphilatelic line winner, sent by Terry Meier of Tampa, Fla.: “Does my home insurance cover little kids with big appetites?”

On the philatelic side, the winner is Tom De Boever of Grosse Pointe Woods, Mich. I would posit that some form of this has been said by a good many noncollecting philatelic spouses!

“I hope the U.S. Air Force doesn’t get my icing confused with ISIS-ing and bomb the house!” from Tom and Laura Tomaszek of Cedar Rapids, Iowa.

“The outlook for our local post office looks Grimm,” by Steve Kotler of San Francisco, Calif.

“Hansel, the nice old lady says she keeps her stamp collection in the oven,” from Edgar Dunlap, sent by email.

“No, Martha Stewart’s house is the one with the green door!” by Nancy Foutz of Stone Ridge, N.Y.

The next cartoon caption contest will be announced in the Feb. 8 issue of Linn’s.