November cartoon contest winner: 'What happened to my better half?' 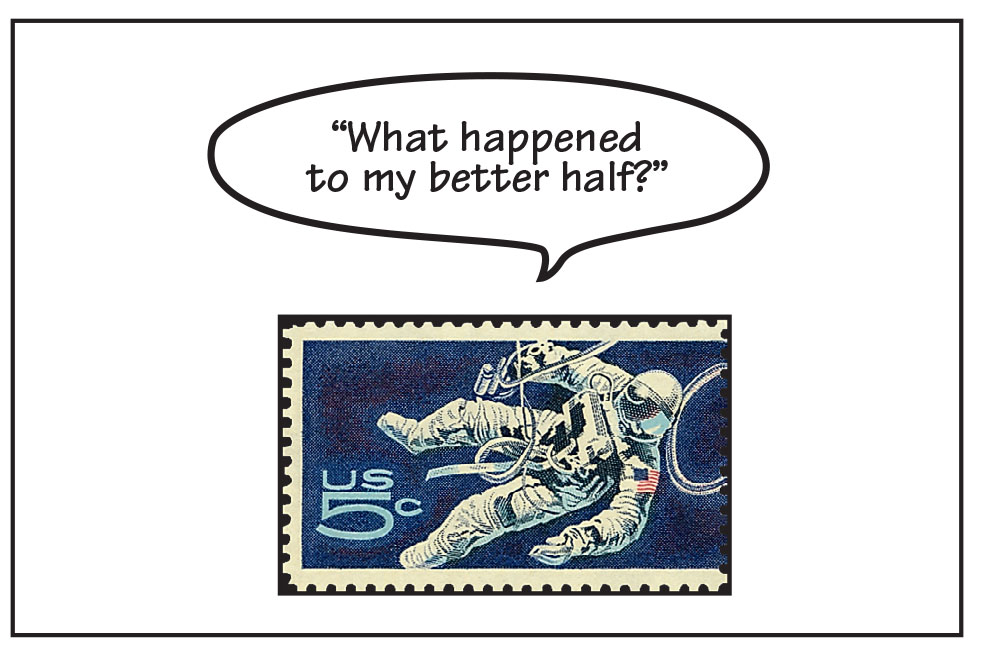 The other half of the 1967 5¢ Space Accomplishments pair is the astronaut’s ticket home. No wonder he is concerned, as shown in this winning cartoon contest entry by Wayne Cunkelman of Lady Lake, Fla. The next cartoon caption contest will be announced in

Lack of oxygen and weightlessness in space were the two most popular themes for the November cartoon caption contest, which featured the astronaut half of the pair of 1967 5¢ stamps honoring accomplishments in space (Scott 1331).

Richard DiLauria of Calvert City, Ky., represents the first group with “You can’t call this an air mail letter if there’s no air!”

Regarding weightlessness, Mick Zais of Columbia, S.C., reflects on the lack of a need for diets in space, “When I said I wanted to lose a few pounds, this is NOT what I had in mind!”

Presidential politics, ubiquitous in the media these days, was the subject chosen by several entrants in our contest. Edgar Dunlap sums up their sentiments, “I’m staying here until the 2016 election is over!”

The stamp also provided a forum for cheerleading about the hobby. Ron Cullers of Peru, Ind., sent this entry “Stamp collecting is Out of This World.”

The philatelic-line winner from Wayne Cunkelman of Lady Lake, Fla., refers to the space capsule half of the original pair — which the astronaut will need if he is to return home safely.

On the nonphilatelic side, the winner is William Joly of Middletown, Ohio, who had the astronaut commenting, “I sure hope this suit wasn’t made by the lowest bidder!”

We chuckle at this, but it is something of a miracle that tens of thousands of elements needed to make the space program a success were indeed manufactured by the lowest bidder, and with a very low failure rate.

“Do you think the 30-minute pizza delivery guarantee applies up here?” from Elaine Bochniewicz of Nashua, N.H.

“Thank heavens for self-sticks; I couldn’t lick anything with this helmet on,” by Joe Krafty of Mechanicsburg, Pa.

“I’m floating and I can’t get up!” from Emmanuel Atsalinos of Silver Spring, Md.

“This is the last time I hook up my own cable TV!” by Don Adubato of Virginia Beach, Va.

“I’d sure like to know what that hissing noise is!” from Allan Stackhouse in Williamsburg, Va.

“I wonder if this is how Luke Skywalker started?” from Stephen Finkelstein of Teaneck, N.J.

The next cartoon caption contest will be announced in the Jan. 11, 2016, issue of Linn’s.