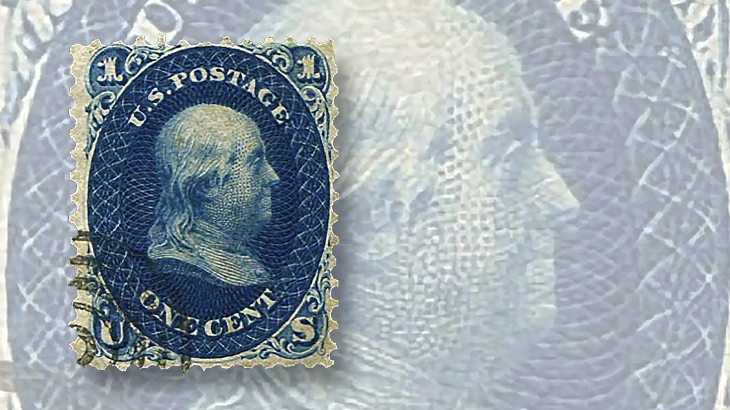 A so-called “premiere gravure” essay resembling the 1¢ Franklin stamp of 1861 was sold by Regency-Superior during its Chicagopex 2015 auction for $18,000. 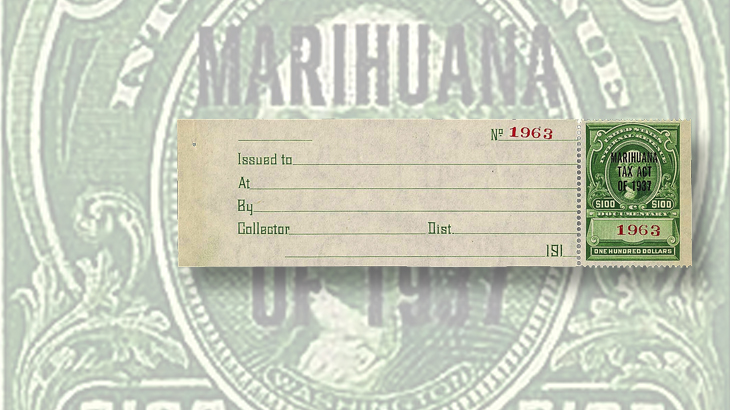 An unused example of the $100 Federal marijuana tax stamp of 1937, formerly owned by the Smithsonian Institution, sold for $510 at Regency-Superior’s sale at Chicagopex 2015. 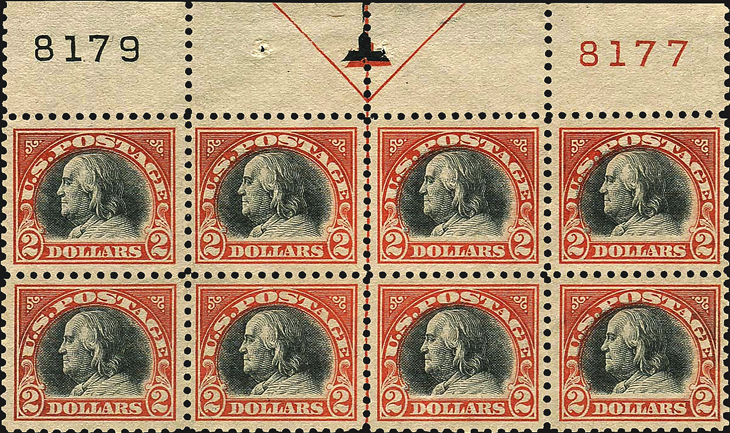 A rare never-hinged mint plate block of the United States 1918 Franklin $2 orange red and black stamp went for $17,400 at the Chicagopex 2015 Regency-Superior auction.
Previous
Next

Regency-Superior held a two-day sale in conjunction with the Chicagopex 2015 stamp show, the annual exhibit sponsored by the Chicago Philatelic Society on Nov. 21-22.

One of the top items was a so-called “premiere gravure” or “August issue” that closely resembles the 1¢ Franklin stamp of 1861, but differs from it in one tiny detail of the design and has a brighter, crisper impression on thin, semitransparent stamp paper.

The premiere gravures never were issued and are not known used.

In spite of this, they used to be considered regular stamps and were once listed as such in the Scott Specialized Catalogue of United States and Covers. Nowadays they are considered to be essays, and the 1¢, formerly Scott 55, has been identified as Scott 63-E11e for the past 25 years.

The example in the Regency-Superior sale does have a neat, concentric-ring target cancel in the lower-left corner. Experts consider this to have been an experimental mark; the Philatelic Foundation records two such cancels in its records, although it declines to rule on their genuineness.

The stamp sold for $18,000, including the 20 percent buyer’s premium the firm adds to all lots.

Among 20th century issues in the Chicagopex auction was an exquisite mint, never-hinged plate block of the 1918 Franklin $2 orange red and black (Scott 523), with plate numbers 8177 and 8179 at top.

The plate block of eight, rare in never-hinged condition, went for $17,400.

At the mellower end of the price range was a $100 federal marijuana tax stamp of 1937.

These stamps, intended to enforce uniform regulation of cannabis, were produced by overprinting documentary revenue stamps of 1917 with the words “Marihuana Tax Act of 1937.”

The stamps were produced in vertical strips of four, with a long receipt tab at left.

The unused no-gum-as-issued example offered by Regency-Superior originates from an archival holding that was deaccessioned beginning in 2005 by the Smithsonian Institution’s National Postal Museum in Washington, D.C. This stamp sold for $510.