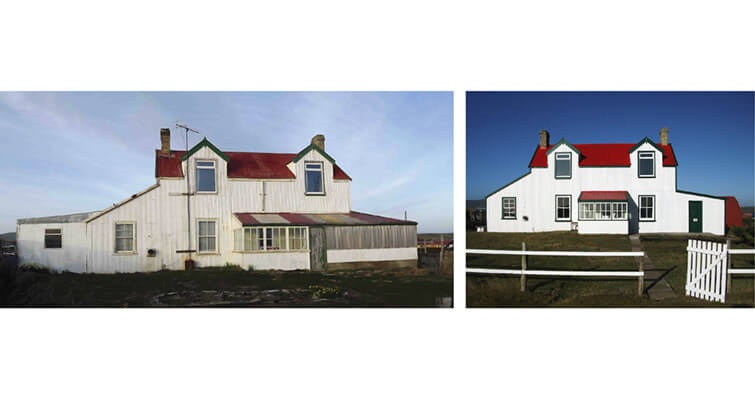 The Falkland Island Post Office Museum is now open to the public. In 2014, Stefan Falkland Heijtz took over sole possession of the building that operated as a post office from 1918 to 1988, and helped restore it before opening the museum on March 8, 2015.

The second-largest land mass of the Falkland Islands, West Falkland, is now home to the world’s southernmost postal museum, according to a release from Nova Stamps.

The Old Post Office House at Fox Bay, West Falkland, has been standing tall since November 1918. It served as a house and post office until 1988, when the post office was relocated to the town’s Village Store.

Stefan Falkland Heijtz took over sole possession of the house in 2014, and helped restore it to an attractive building before opening the museum on March 8, 2015.

“The Museum is primarily, but not exclusively, showing the history of the Post Office at Fox Bay, and the displays include a counter with postal artifacts, the old wooden rack of mail boxes, mail bags, the old Post Office safe, as well as information about and pictures of old postmarks and covers sent from Fox Bay from 1899 onwards,” the release reads. “One of the more remarkable discoveries was a part impression of one of the old Fox Bay postmarks (type FB.2 or FB.3) on one of the floor boards in the Old Post Office!”

The release continues, “The locals at Fox Bay have been most supportive and interested in what has been going on, and very complimentary about the results. So many have a connection of some form to the house, and they have all loved seeing it being returned to its former glory.”

More renovations are on the way in 2016.

“Canada Post will kick off 2016 on the second Monday in January (Jan. 11) with an estimated 14 stamps, including multi-stamp installments in two continuing series, a five-stamp inaugural release in a new series of Birds of Canada, and a new definitive depicting Queen Elizabeth II.”

Some surprises in the set include the return of older designs paired with new denominations.

”Highlights of the U.S. sale included a never-hinged 1851 1¢ Franklin, type IV (Scott 9), with margins so big they incorporated parts of all eight neighboring stamps.”