For one Canada Numeral cancellation, a case of mistaken identity 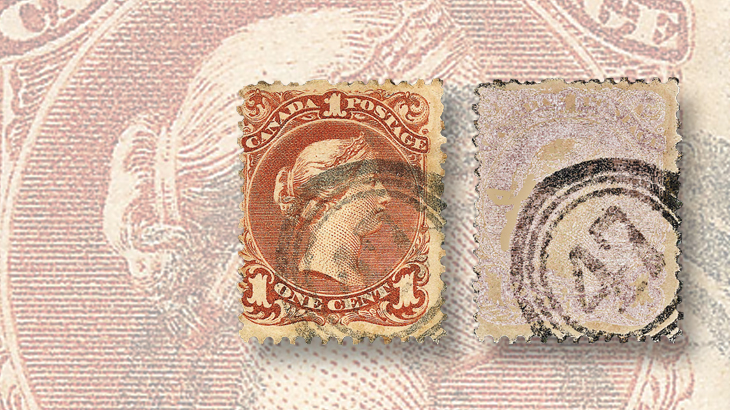 An attentive reader noticed that what the author called a “17” numeral cancel on this 1868 1¢ Large Queen (left, Scott 31) is in fact a “47,” clearly seen at right with the stamp design artificially minimized. 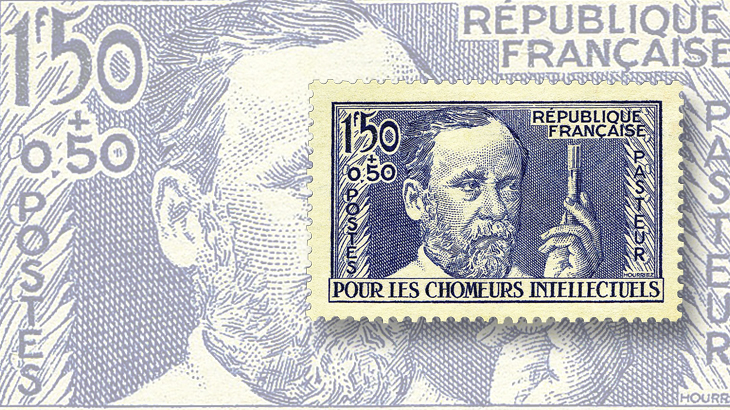 As Louis Pasteur, shown here on a semipostal stamp from France, once said, “In the fields of observation, chance favors only the prepared mind.”
Previous
Next

One of the images in my Nov. 2 column, “Canada’s early 19th-century Numeral cancels by the numbers,” brought a response from a keen-eyed collector, noting “that the image showing the stated number 17 is, in actuality, number 47.”

My critic added that “perhaps Mr. Baumann could notify Siegel Auction Galleries of a misidentification.”

Because the New York auction firm of Robert A. Siegel Auction Galleries had generously allowed me to use this and many other images, I was chagrined. But it is indeed the number “47” as he says, not “17.” A correction was published in the Nov. 30 Linn’s.

Illustrated nearby is the original image, and next to it a copy in which the stamp design has been digitally minimized to make the “47” easier to see.

It pains me more than a little to admit that the error seems to have been that of the auctioneer — an error which I all-too-faithfully repeated.

The winning bidder still got his money’s worth: the 2013 Unitrade catalog lists both the four-ring “17” numeral cancel of Ingersoll, Canada West (now Ontario) and its “47” counterpart from Three Rivers, Canada East (now Trois-Rivieres, Quebec), as having rarity factors of four, which means fairly scarce to very scarce.

It was lazy of me to simply parrot what I read in the catalog rather than taking a good, close look at the image myself. That’s a teachable moment that makes me grateful that this mistake was brought to our attention.

Every variety, color shade, plate flaw, perforation variety, and reported postmark that you ever heard of was discovered by a collector who had focus enough to remain aware to see, rather than simply look at, what was before him.

Instead of thinking, “Oh, I’ve seen it all before” as so many others do, that collector thought, “I need to take a closer look.”

Not always, but once in a great while, such persistence and attention are rewarded — sometimes quite handsomely.

In an 1854 university lecture, Pasteur stated, “In the fields of observation, chance favors only the prepared mind.” One of those fields is philately. When we forget that, we only shortchange ourselves.

A simpler phrase for Pasteur’s comment is: “Keep your eye on the ball.”

I hope you have enjoyed this column, and that you’ll join me for more in the year ahead. If, however, you find yourself saying, “I wish he would write about (fill in the blank),” then please send your suggestion, question or complaint to Fred Baumann, c/o Linn’s Stamp News, Box 4129, Sidney, OH 45365-4129.

I cannot promise to write back, but I do promise to read and consider every letter received.