From pointers to 'Dog 92': working dogs on the stamps of Canada 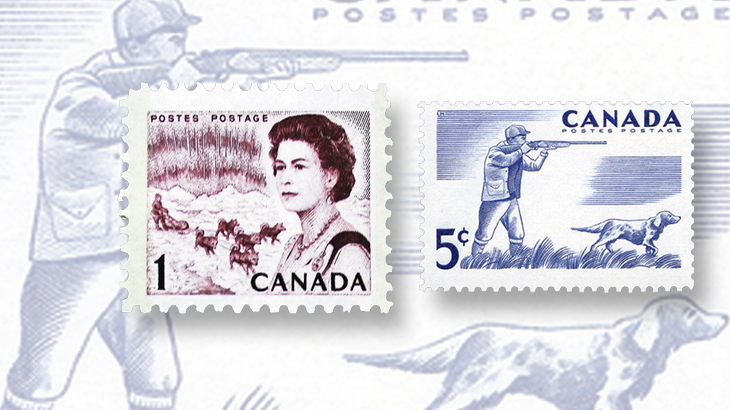 Early Canada stamps depicting working dogs include a dog team under the northern lights on the 1967 1¢ Centennial definitive (Scott 454), left, and the pointer finding game on the 5¢ Outdoor Recreation stamp of 1957 (367).

In May 2015, Canada Post issued a Love Your Pet booklet and souvenir sheet with delightful illustrations and common-sense tips on basic pet care (Linn’s, May 25, 2015).

As background for the story, I compiled a chart of Canada’s stamps depicting pets, and was surprised to find that more than 70 percent of the face-different canine designs issued over the last 58 years have pictured working dogs.

I returned to that chart two weeks ago, after I read Denise McCarty’s New Stamps of the World column titled “Working dogs perform tasks from hunting to detection of explosives” in the Dec. 14 Linn’s. That column mentioned stamps from a half-dozen nations as far afield as Australian Antarctic Territory and Romania.

Canada has much to offer a collector of that topic. In fact, one of its stamps arguably depicts the most successful life-saving dog in history.

To begin at the beginning, shown nearby are two of the earliest Canada stamps to depict working dogs.

Canada’s first canine commemorative was a 5¢ stamp showing what appears to be an English setter pointing a hunter’s way to a tasty pheasant dinner. It was one of four Outdoor Recreation stamps issued in 1957 (Scott 367).

A 1¢ Centennial definitive of 1967 (Scott 454) shows the most celebrated of working dogs on Canada’s stamps, a dog-sled team, its passage illuminated by the northern lights.

It is one of 10 Canada stamps featuring sled dogs and teams, an age-old fixture of Arctic life that appears to be nearing its end.

In 1988, Canada Post issued a block of four se-tenant (different designs joined together) 37¢ stamps for the 100th anniversary of the Canadian Kennel Club (Scott 1220a).

What in less thoughtful hands could have been a celebratory trot around the ring for a group that many imagine as a conclave of upper-class pet fanciers instead went in a very different direction, as shown here.

The dogs depicted are four rough-and-ready historic breeds of Canada’s forests, marshes and snows. I was not able to find out much about how these stamp designs were chosen, but their stories dramatically underscore a real need for canine conservation.

Bred by the Tahltan people of British Columbia, these fox-sized creatures used their light weight, agility and absolute fearlessness to track, pursue, and corner brown bears and cougars through heavy snow, holding them at bay for the hunters.

When white explorers and settlers arrived bringing their own dogs, the smaller population of bear dogs was first diluted and then simply disappeared.

The same outcome might await the Canadian Eskimo dog (Scott 1219), a breed believed to have originated among the Thule people of Greenland as long as 4,000 years ago.

Over the millennia, sleds pulled by these dogs provided vital winter transportation to countless generations.

In 2008, however, an estimated 300 purebred animals were all that were left, their numbers whittled down by the popularity of the snowmobile and the spread of infectious diseases.

Despite these sobering tales, the other two Canadian breeds in the block of four are doing well.

Smallest of the retrievers, the Nova Scotia duck-tolling retriever (Scott 1218) can trace its origin to one small Atlantic town, Little River Harbour, near the southwesternmost extremity of Nova Scotia.

The dog’s name come from the Middle English tollen, meaning to lure game, and the dogs are often referred to as “tollers.”

A gentle giant, the Newfoundland (Scott 1220) is the best-known and most popular of the four breeds on this block of four.

But the most deserving dog on any Canada stamp appears on the relatively little-known 46¢ stamp seen here, one of four Medical Innovators stamps released as part of Canada’s Millennium commemorative series Jan. 17, 2000 (Scott 1822a).

On the stamp are two photographs of Dr. Frederick Banting (1891-1941), and at the foot of the stamp is a little collie. Her story was best and most briefly told in the 2010 book Breakthrough by Thea Cooper and Arthur Ainsberg:

“On August 31, 1921, in the early days of his research, one of Frederick Banting’s beloved test subjects died. Referred to in his notes as ‘Dog 92,’ the collie provided Banting’s first real success during his research. The dog lived for twenty days without a pancreas, surviving with an extract Banting and [Dr. Charles] Best called ‘isletin.’

“When Dog 92 died, Banting cried. He always loved and appreciated the sacrifice the dogs were making so that humans might live. ‘I shall never forget that dog as long as I shall live,’ Banting wrote of Dog 92 in 1940, ‘… when that dog died I wanted to be alone for the tears would fall despite anything I could do.’ ”

Medical researchers, and especially those whose work requires animal experimentation, are often regarded as coldly clinical, indifferent to the animals with which they work.

The irony is that Banting had grown up in a small Ontario farm town, where he kept and loved dogs as a boy. Despite the horrors he had undoubtedly witnessed as a doctor with the Canadian Army in World War I, he cared about the dogs he worked with and keenly felt for them.

“Dog 92” (called Alpha and Marjorie in other accounts) was one of 90 or more dogs who gave their lives in the research that brought insulin to mankind. And, to date, insulin has saved the lives of well more than 17 million men, women and children.

As for Banting, when world war returned to Europe, he volunteered to lend his experience once again, heading to England to conduct tests on a new high-altitude flying suit developed by a colleague to save lives.

Early in 1941, the light bomber ferrying him to England on this mission crashed near the Newfoundland coast. Before he died of his injuries, Banting bound up the wounds of the pilot, the only one to survive the crash.