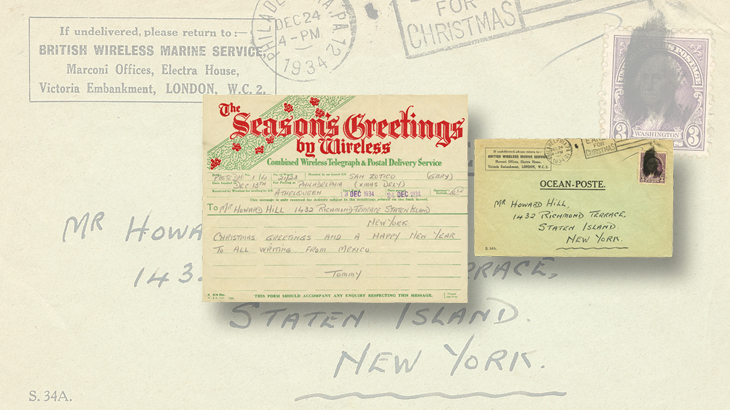 In the 1930s, telegrams specially created for the Christmas season could be sent and delivered at the last minute. This example was sent through the mail in 1934 in this “Ocean-Poste” envelope. 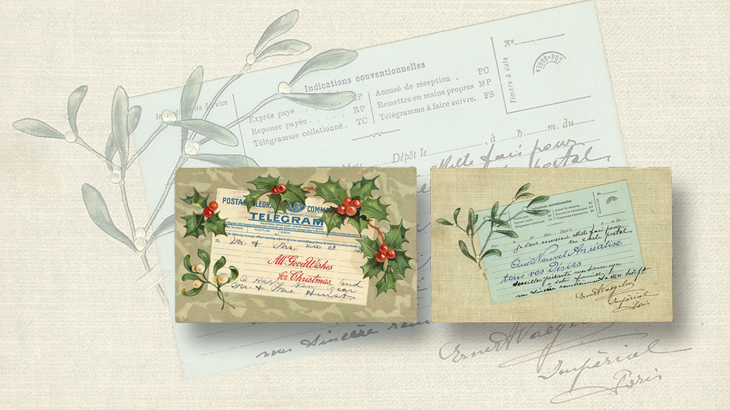 Much less expensive than a genuine telegram are these two postcards that mimic telegrams.
Previous
Next

What would you do if you were aboard a ship as Christmas was rapidly approaching, and you had not yet sent your Christmas cards?

In 1934, you could have taken advantage of the British Wireless Marine Service, which allowed for “Season’s Greetings by Wireless.”

You would hand in your Christmas message, have it telegraphed to a participating telegraph office, and it would be prepared on the form shown nearby.

Then it would be delivered through the mail in a special “Ocean–Poste” envelope, shown to the right the form.

The envelope was postmarked Dec. 24 in Philadelphia.

Of course, the cost would have been prohibitive if you did this in bulk. But for close family members or friends, it was likely a nice surprise.

Because Christmas greetings by telegram were popular in this era, enterprising producers of postcards provided a service for those who had more lead time: holiday greeting postcards with telegram illustrations on the picture side. You could get the ambience with considerably less cost.