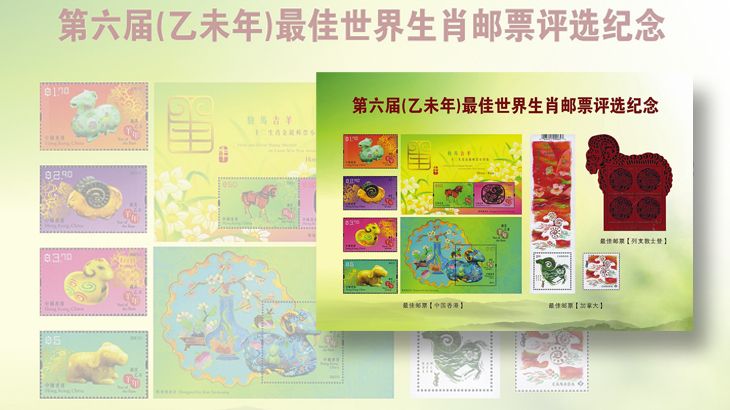 This postcard showing the winning designs in the Year of the Ram stamp popularity poll was sent to people who participated in this poll organized by a stamp society in China. 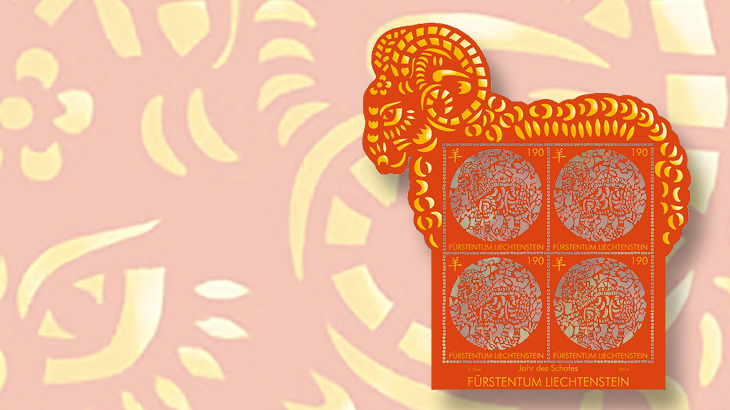 Liechtenstein’s Year of the Sheep (Ram) pane of four stamps shaped like a sheep was the third most popular issue in a recent Year of the Ram stamp poll. 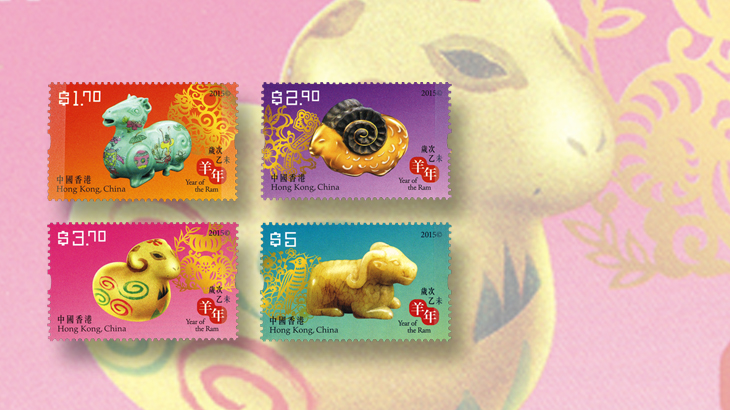 Hong Kong won a Lunar New Year contest for the fourth year in a row with its Year of the Ram issue. 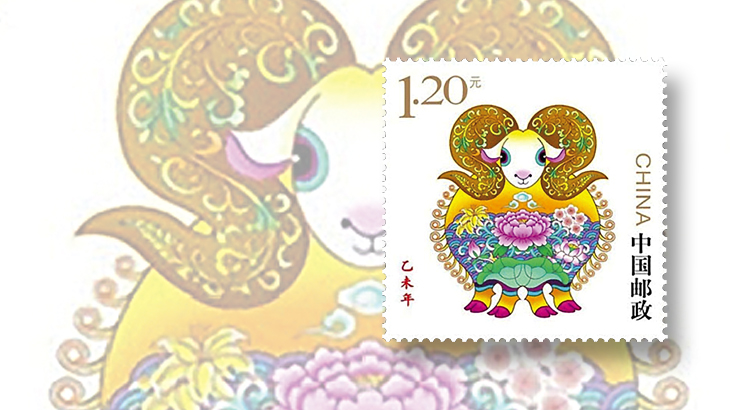 China received an honorary award in the Year of the Ram contest for stamps from other countries and China’s administrative regions. 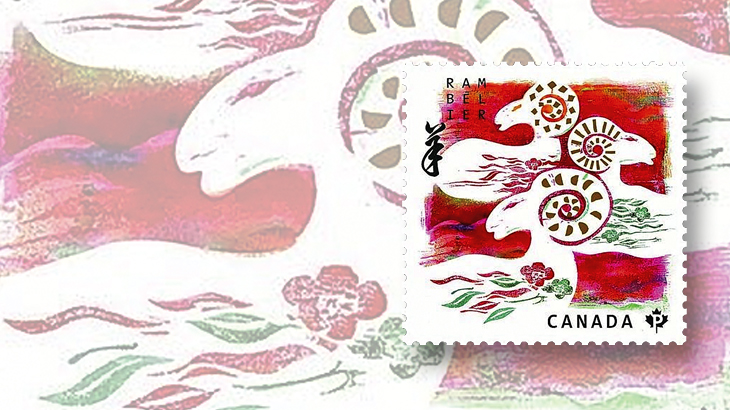 The design of Canada’s domestic-rate Year of the Ram stamp represents a Chinese word that means “three sheep make happiness.” This stamp placed second in a Year of the Ram popularity poll.
Previous
Next

Stamps from Hong Kong, Canada, and Liechtenstein won a competition for the best Year of the Ram stamps.

The contest included stamps from 56 countries, or special administrative regions celebrating the Year of the Ram.

The contest was organized by the Chinese Shengxiao (Zodiac) Philatelic Society and also sponsored by the weekly newspaper Philately, the Suzhou Shengxiao Stamp Museum, and eight philatelic units. This is the sixth competition for the best Chinese Zodiac stamps.

The Chinese New Year, also known as the Lunar New Year, follows a 12-year cycle with each year associated with one of the zodiac signs. The ram is the eighth animal in the cycle of the Chinese zodiac calendar.

As with the competition held in 2014, voting in the Year of the Ram competition was only open to the members of the Chinese Shengxiao Philatelic Society, not to other stamp collectors.

China’s fastest-growing philatelic society, it has more than 6,000 members, an increase of more than 600 in one year.

China’s Year of the Ram stamp was not eligible because the contest focused on stamps from other countries and special administrative regions. The panel gave this 1.20-yuan stamp issued Jan. 5, 2015, an honorary award.

This stamp pictures a happy sheep. Its horns are decorated with flower patterns, and its body is ornamented with peony, lotus, plum blossom, lily and propitious clouds.

The design embodies auspiciousness, prosperity and eternal happiness, symbolizing the best wishes for the New Year.

Each element of the design has a special meaning. For example, the peony’s three layers represent that China has issued three series of Chinese New Year stamps.

The 12 curls on both sides of the ram’s body represent that each stamp series continues for 12 years.

Wu Guanying, among the main designers of the 2008 Beijing Olympic Games mascot, designed this stamp. He also designed the Year of Rabbit and Year of the Snake stamps in 2011 and 2013, respectively.

For the fourth year in a row, Hong Kong won first place in this contest. The Jan. 24, 2015, Year of the Ram issue includes four stamps and three souvenir sheets.

According to the certificate of authenticity, this sheet was produced using 100 percent genuine silk made in Italy.

The third Hong Kong souvenir sheet contains two $50 stamps: a Year of the Horse stamp printed using silver foil, and a 22-karat gold-foil Year of the Ram stamp. This sheet also is accompanied by a certificate of authenticity.

The 2015 Year of the Ram issue is the fourth set in the fourth series (each series continues for 12 years) of Lunar New Year stamps.

The Chinese Shengxiao Philatelic Society’s press release about the competition said that Hong Kong’s stamps have a prominent theme, and that the colorful and happy designs display the rich culture characteristics of the Chinese zodiac.

The press release also noted that the souvenir sheets were elegant and beautiful, bringing festive joy.

Canada’s Year of the Ram stamps issued Jan. 8, 2015, placed second in the contest. It is the fourth time that an issue from Canada has been among the top three. The previous wins were for Year of the Tiger, Year of the Rabbit, and Year of the Snake stamps.

Canada Post traditionally issues a pair of stamps for each Lunar New Year, one for domestic and one for international use.

The design of the nondenominated permanent domestic-rate Year of the Ram stamp represents the Chinese word “san-yang-kai-tai” (three sheep make happiness), and depicts three sheep awaiting the arrival of spring.

The $2.50 international-rate stamp features a green ram on a white background. This stamp was issued in a souvenir sheet.

The image in the selvage area above the stamp is inspired by China’s Danxia mountains. The image shows a rain of gold petals, an idealized landscape and three rams resting under a tree filled with plum blossoms.

Both of these stamps include the phrase “Year of the Ram” written in French, English and Chinese.

Helene L’Heureux designed Canada’s Year of the Ram stamps and souvenir sheets using illustrations by Susan Scott. The calligraphy is by Ngan Siu-Mui.

The intricate silhouette design of a red sheep was created using laser paper-cutting technology. The stamps were sold in sheep-shaped panes of four.

New Zealand, which has a large sheep industry and a substantial East Asian community, issued four Year of the Sheep stamps Jan. 14, 2015. This issue placed fourth in the contest.

Guernsey’s Year of the Goat stamps and a souvenir sheet issued Jan. 28, 2015, came in fifth.

The competition committee printed a postcard picturing the three top Year of the Ram issues.

Everyone who voted in the contest received this postcard signed by the president of the Chinese Shengxiao Philatelic Society, Zhou Zhi-hua.

Dingguo Dai is a philatelic columnist and retired chemist living in Arizona. He writes columns for the Chinese monthly Philately, Shanghai Philately, China Philately News, and Shengxiao (Chinese Lunar Zodiac) Philately. He also was a jury member for the contests for the Year of the Tiger, Rabbit, Dragon, Snake, Horse and Ram stamps.