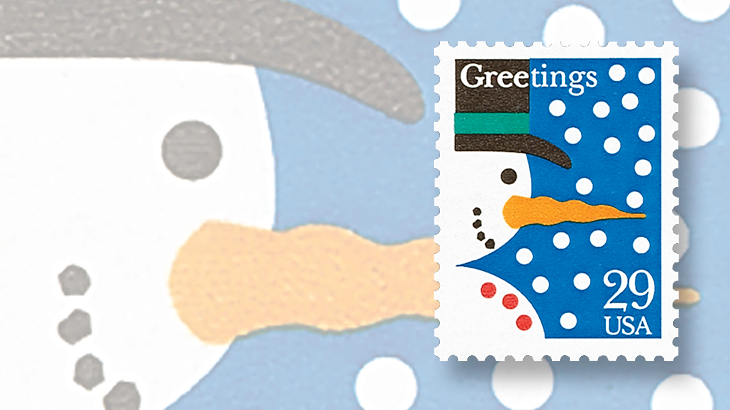 The cartoon caption contest stamp for January is this 1993 29¢ Snowman stamp. Put yourself under his hat and tell me what you might be thinking or saying about the snowman’s world, his future, stamp collecting, or any other subject. There will be a prize for the best philatelic and nonphilatelic lines. The rules to enter the contest are in the accompanying article. Entries must be received by Jan. 25 for a chance to win a prize.

Winter snows have already hit hard in the Midwest as this is being written, but the heaviest snows in the mid-Atlantic region where I live usually come after the New Year has made its appearance.

So, in expectation that the meteorologists have predicted correctly, and we will have many opportunities to shovel snow, clear off cars, go sledding, and build snowmen, I have selected the snowman on the 1993 29¢ Christmas stamp (Scott 2793) for the January cartoon caption contest.

Put yourself under the snowman’s hat, and tell me what you might be thinking or saying about your carrot nose, the children that built you, your future, or any other subject.

To be considered for the prizes, entries must reach me not later than Jan. 25. Why not enter now while you’re thinking about it?