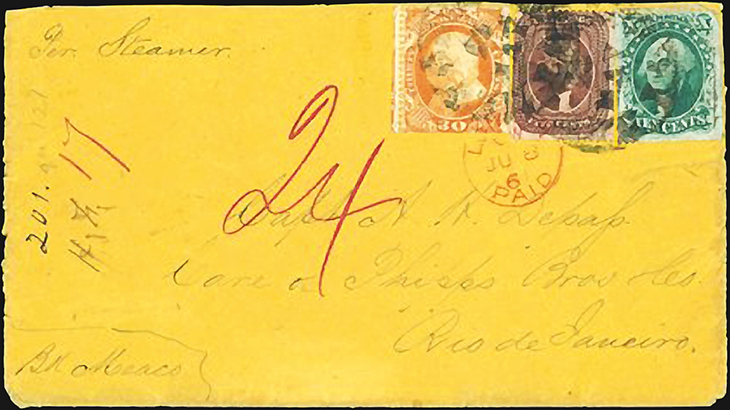 A couple of months ago, I asked readers for some feedback on improving this column. Several of you responded with suggestions, for which I’m thankful.

Dennis Dajczak of Ohio suggested mentioning more lower-priced items alongside the big-dollar results. I’ve tried doing that on occasion; I will try harder. While it’s fun to learn about the gems of philately, there are some great stories attached to under-$200 items, too, and when I find them, I enjoy telling them.

The firm of Schuyler J. Rumsey held its Fall Sale from Oct. 20-23 in San Francisco, including many fascinating items with great stories to tell.

An 1813 letter written by founding father John Adams, congratulating Navy Secretary William Jones on his appointment during the War of 1812 and expressing the hope that some “man of letters” would write a history of the U.S. Navy, sold for $17,250, including the 15 percent buyer’s premium added by Rumsey to all lots.

A so-called “prize court cover” from the U.S. Civil War told a fascinating story about what would happen to Southern blockade-running ships if they were caught. Prize courts were common in American and European warfare in the 17th to 19th centuries, and were authorized to decide if ships had been lawfully captured or seized, and to determine the fate of the ship and its contents.

The pretty orange cover bore a three-color franking: a 30¢ orange Franklin (Scott 38), a 10¢ green Washington (35) and a 5¢ brown Jefferson (30A), paying the 45¢ transatlantic rate via London to Rio de Janeiro. The cover was postmarked in Boston on May 29, 1861, and a red London receiving mark showed it arrived there from Liverpool on June 8. The large “24” over the address indicated the postal credit to Britain. The letter then left by steamer for Brazil, where it was delivered to its addressee, a ship’s captain named A.H. Depass.

Depass and his bark, the Meaco, soon left for New Orleans with a cargo of coffee. On Sept. 5, while anchored off Pass a l’Outre, La., in the Mississippi delta, the Meaco was captured by the Union blockader, U.S.S. Brooklyn, and forced to sail to Philadelphia where it was impounded as war booty.

The letter to Capt. Depass was entered as evidence at the Philadelphia Prize Court, as shown by the docketing at left on the cover: “201./H.F.”, the initials of commissioner Henry Flanders, and the case number “17” in red.