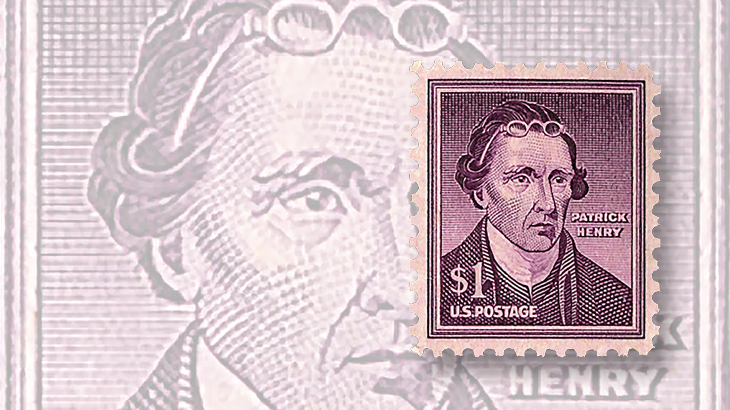 Issued Oct. 7, 1955, this $1 Patrick Henry Liberty-series stamp is a so-called wet printing because of the relatively high moisture content of the paper at the time of printing.

When I was a budding collector, back in the mid-1970s, I longed to add the $1 Patrick Henry and $5 Alexander Hamilton stamps to my collection.

At a time when mailing a first-class letter in the United States cost 10¢, stamps with dollar denominations were practically out of reach for a boy with a modest allowance.

As such, the $1 Henry and the $5 Hamilton were the ones that took me the longest to acquire.

It was a singular thrill when I finally obtained these two high-denomination Liberty-series stamps in mint never-hinged condition. And, yes, I still have both of them.

This first printing is known as a “wet” printing, because the paper was slightly moist when the stamps were printed. This made the inked impression on the paper appear somewhat indistinct or soft.

Shown nearby is a wet-printed $1 Patrick Henry stamp.

Approximately three years later, a version of the $1 Patrick Henry appeared that looked much crisper than its 1955 counterpart (Scott 1052a). This is because the stamp was printed on paper with a much lower moisture content — the so-called “dry” printing.

In the 2015 edition of the Scott Specialized Catalogue of United States Stamps and Covers, the Liberty-series listings were extensively revised to better account for the chronology of the wet and dry printings.

For perspective on the evolution of wet and dry printing, as well as myriad other topics dealing with this fascinating series, I heartily recommend The Liberty Series by Ken Lawrence, C. David Eeles, and Anthony S. Wawrukiewicz.

It wasn’t until I joined the Linn’s Stamp News editorial staff in 1999 that I began to collect postal history.

How fun it was to find interesting covers and determine how the stamps on them were used to move the contents from origin to destination: the foundation of a postal historian’s pursuit and study.

My focus is on postal history of U.S. dollar-denominated stamps beginning with the $1 Eugene O’Neill and $5 John Bassett Moore of the Prominent Americans series.

Nonetheless, I’ve snagged a few $1 Patrick Henry covers during the past 15 years that appeal to me.

One of these, illustrated nearby, is an airmail cover sent Dec. 26, 1957, from New York, N.Y., to Stockholm, Sweden. A somewhat indistinct oval receiver handstamp above the address shows the cover arrived in Stockholm Dec. 28.

A rumpled appearance and some small tears attest to the fact that the envelope’s contents were bulky: a “recorded tape,” according to the sender’s docketing on the front.

Further confirmation of the parcel’s contents and weight is seen on the green customs form affixed at lower right.

Pictured here is one such cover, sent via registered mail Sept. 30, 1967 (circular datestamps on back, not shown), from New York City to Hyderabad, West Pakistan. A Hyderabad backstamp indicates the cover arrived Oct. 3.

As a point of clarification, the exclave of West Pakistan was renamed Pakistan July 1, 1970. East Pakistan became Bangladesh Dec. 16, 1971.

The Scott U.S. Specialized catalog values the $1 Patrick Henry on cover at $25. This value applies to the most common contemporaneous use: in combination with other stamps on a domestic cover.

Both of the covers illustrated here likely would command a premium above the Scott catalog value. The cover to Pakistan would merit a larger premium because of the scarce destination.

Please share your items and stories about U.S. dollar-denominated commemorative and definitive stamps. Write to Dollar-Sign Stamps, Box 4129, Sidney, OH 45365-4129. You also can follow me on Twitter: @DollarSignStamp.