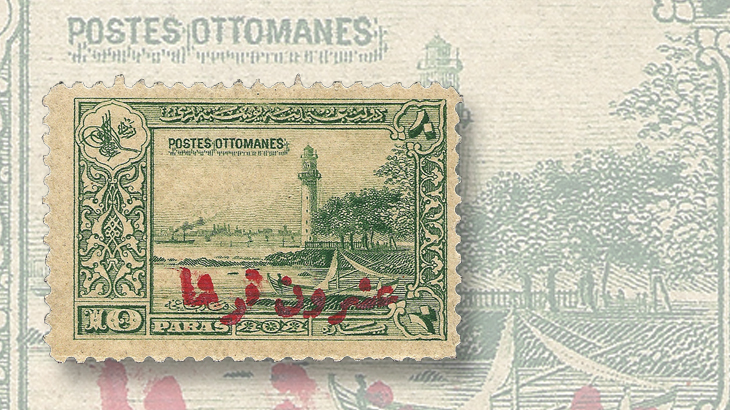 The 20-qirsh Nejd surcharge on the 10-para Ottoman stamp was prepared but not issued. Only two examples are known to the author. 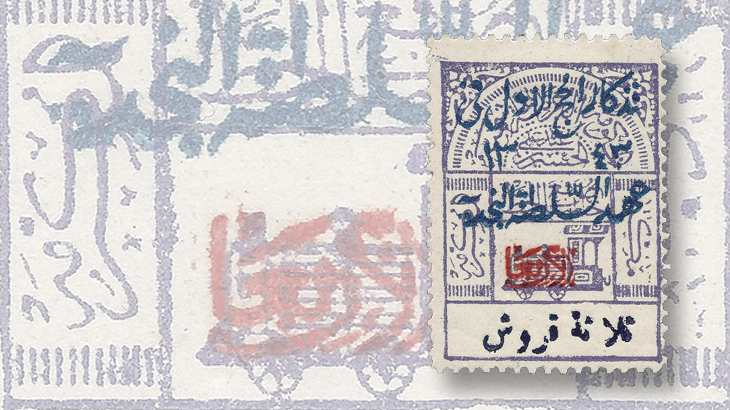 One of the most popular stamps of the Sultunate of Nejd is the overprinted type I 3-piaster lilac Hejaz railway tax stamp (Scott 34).
Previous
Next

The era of the Sultanate of Nejd heralded the rise of the great desert warrior, Ibn Saud, and his consolidation of the various areas of the Arabian Peninsula into what we know today as the Kingdom of Saudi Arabia.

The Nejdis entered Mecca Oct. 16, 1924. However, it was several months before they started issuing their own stamps.

The time during which the Nejdi authorities issued stamps is referred to as the Nejd philatelic period. It began March 20, 1925, and ended March 15, 1926, but use of the Nejd stamps continued until the end of 1926.

The stamps of Nejd present a number of difficulties for collectors:

They are in Arabic, and non-Arabic speakers find them hard to decipher.

Many handstamps and surcharges have been forged.

There has been a lack of published material beyond what is in the standard stamp catalogs.

And, due to the sparse amount of information about them, these stamps have often baffled and confused collectors because of the variety of handstamps and surcharges.

For these reasons, the stamps of Nejd often have languished in dealers’ stocks.

Experience tells us that people are more likely to collect the stamps of a given area if published information is available.

Bearing this in mind, my aim was to bring together in one book the history of these Nejd stamps for the benefit of current and future collectors of this area.

The research for and writing of The Sultanate of Nejd, A Philatelic Manual began in 1999. It has taken more than 16 years to complete the book, due to the difficulty of acquiring the material.

This book provides a complete discussion of each Nejd stamp. The discussion includes stamps found on commercial or philatelic covers, the earliest cancellation or use dates, the quantity issued/seen, and the genuine varieties known.

Many Nejd stamps are rare; they were issued in small quantities — sadly not enough to satisfy a large body of collectors.

It is important to note that some Nejd stamps exist only in mint condition, not postally used or canceled to order.

Stamps from this period have been extensively forged. Forgers set to work early to satisfy the demands of collectors.

To help today’s collector, the genuine Nejd handstamps and their important characteristics are illustrated identified in the book. Keep in mind that during this period a postal cancellation is not evidence that an item is genuine.

While every effort has been made to make the book readable to the general collector, it has also been written in as much detail as possible to satisfy the needs of the advanced specialist.

There is some repetition in certain sections of the book. Because many stamps are discussed individually, such repetition was deemed necessary.

With the guidance of this book, the collector might find treasures in his or her own collection that they never knew they had.

A civil engineer by profession, I am a specialist in the stamps of Saudi Arabia. I have been a stamp collector since the age of 15.

The Sultanate of Nejd, A Philatelic Manual comprises 408 8½-inch-by-11-inch glossy pages and contains 865 color illustrations. This is a limited-edition publication of 250 hardbound books. Of these, 50 books have gilt-edge pages and slipcases.

For additional information about the book, you can contact me at riachi@whc.net or write to Ghassan Riachi, Box 220135, El Paso, TX 79913.