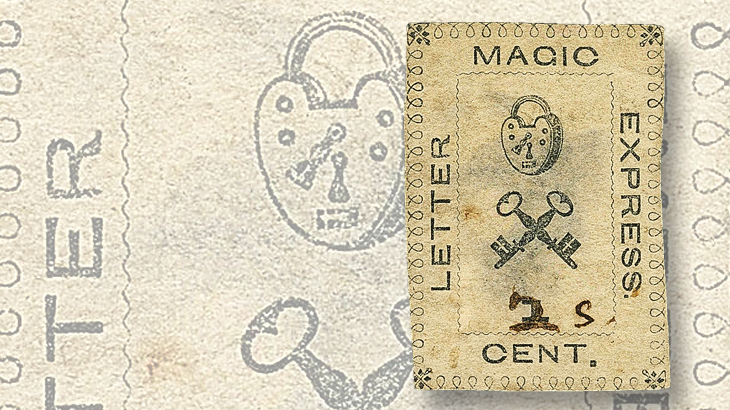 A previously unreported 1¢ Magic Letter Express local stamp with handwritten notation of "2" over the printed "1." The stamp is being offered during the Dec. 17-18 Robert A. Siegel auction in New York City.

Robert A. Siegel Auction Galleries of New York City reports a new example of the 1865 1¢ black Magic Letter Express Lock and Keys local stamp of Richmond, Va. The uncanceled stamp has a manuscript “2” written over the printed “1.” The letter “s” is also written on the stamp, above the “T” in the printed word “CENT.”

The Magic Letter Express local stamps are great rarities, and this surcharged stamp is only the second example of the 1¢ stamp (Scott 101L1) known. The other 1¢ stamp is affixed to an 1865 cover with a “Paid” manuscript marking, delivered locally in Richmond.

The new discovery is being offered in Siegel’s Dec. 17-18 live public auction of United States and Confederate States postal history, which is taking place at the Siegel Auction Galleries on the fourth floor at 60 E. 56th St. in Manhattan. The sale features the estate of Charles D. Jinks and a collection of centennial entires, with most lots offered without reserves.

Siegel describes the stamp as “the unique example of the one-cent Magic Letter Express stamp uprated to two cents,” adding that the manuscript surcharge appears to be in the same hand as the manuscript cancellation on other examples. The stamp margins show full outer ornaments with a clear impression, and a large central thinned area, according to the auction catalog description.

Three denominations of Magic Letter Express stamps were printed during the brief existence of the service: the 1¢, 2¢ and 5¢. The 2016 Scott Specialized Catalogue of United States Stamps and Covers lists the 1¢ and 2¢ as unique (prior to the new report of this surcharged stamp). Siegel notes that four examples of the 5¢ exist, two of which are on cover.