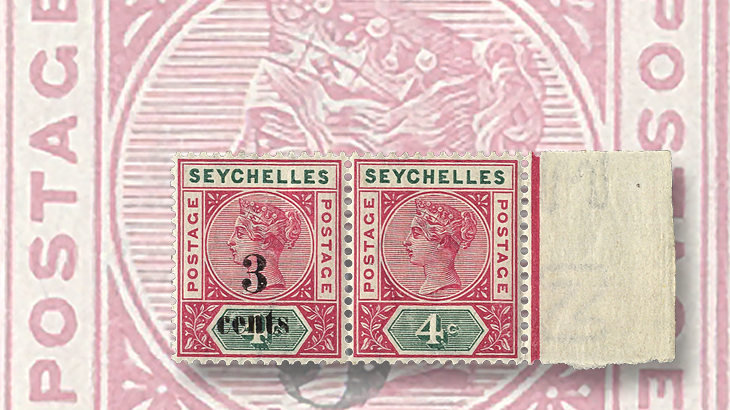 A pair of Seychelles Queen Victoria 4¢ stamps, with a 3¢ surcharge on the left stamp only brought $12,650 at the December Victoria Stamp Co. auction in New York City. 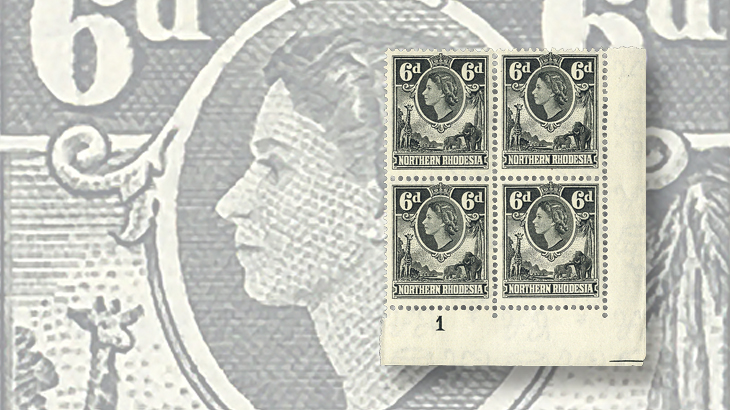 The error is listed in the Stanley Gibbons catalog as number 68w, and in Pierron’s online catalog of Great Britain and Commonwealth stamps during the reign of Queen Elizabeth II, including errors and varieties, as ZMB136a.

“Until the discovery of this block, there were about 4 examples recorded hinged and one known NH [never hinged],” according to the Victoria Stamp Co. catalog description. “Also about 4 are known used, indicating that the sheet was sent to the colony.”

The unique block offered by Victoria is never hinged. It sold for $25,300, including the 15 percent buyer’s premium added to all lots.

A pair of Queen Victoria 4¢ stamps of Seychelles, with a “3 cents” surcharge on the left-hand stamp but not the right-hand one (Scott 22d), was described as a cornerstone to a collection of this former Indian Ocean colony. It sold for $12,650.

At the lower end of the price scale, a magnificent corner-margin example of the 1914 5-shilling King George V stamp from the Caribbean island of Montserrat (Scott 42), with a plate number 1 in the left margin, in never-hinged condition, sold for $69 at the Victoria Stamp Co. sale.

Also in that auction, an impressive accumulation of Great Britain stamps and covers used in Malta showed the progression of postmarks, from an M in a barred oval through various types of the duplex Malta circular datestamp next to a barred oval with the code A25 that was assigned to the colony.

British stamps were used in Malta before the island began issuing its own stamps in 1860, as well as for some time afterwards. These stamps appear in the Scott Classic Specialized catalog at the beginning of the Malta section, with the listings given the prefix letter A.

Malta served as a major British naval base and crossroads of the Mediterranean, so a great deal of correspondence was generated and collected. Nonetheless, it is unusual to find such a comprehensive holding of these forerunners as were offered in the Victoria Stamp Co. sale, including many stamps with “beautiful, exhibition-quality strikes” and covers showing auxiliary markings of French and Italian steamship services that carried the mail. The collection fetched $5,750.