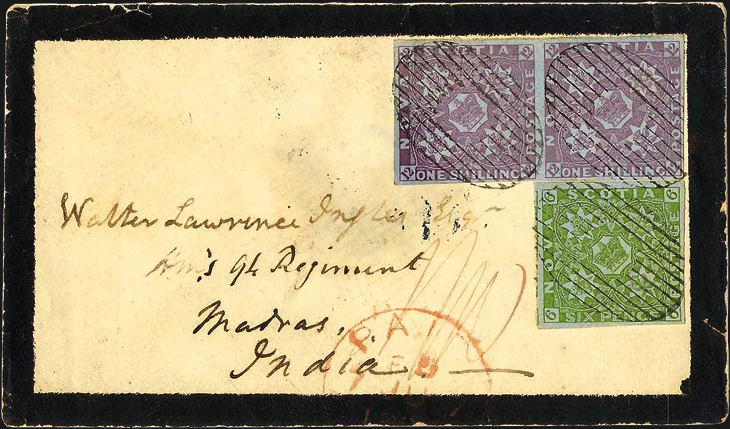 An 1853 Nova Scotia mourning cover, franked with 1-shilling and 6-penny stamps, mailed to Madras, India, was sold by Spink during the November auction in New York for $97,850. 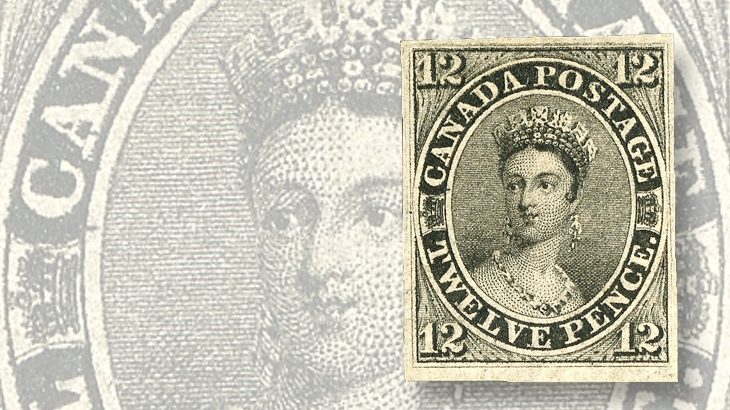 An unused example of Canada’s 1851 12-penny black Queen Victoria stamp was sold in November by Spink in New York for $83,475.
Previous
Next

Spink, in New York, offered the Charles Adams collection of United States and Canada on Nov. 18, and held its Fall Collector’s Series sale Nov. 18-19. The U.S. portions of those sales are reported in a separate Auction Roundup.

This stamp, never popular with the public at the time of issue and withdrawn after just 1,450 examples were sold, is far scarcer unused than used. The one in the Spink sale had original gum and no faults, making it especially desirable.

Another lot was described as a dangerous counterfeit of the same stamp in used condition. It consisted of a plate proof on India paper, rebacked with fake lines resembling laid paper and with a forged cancel of concentric circles. An unaltered plate proof has a value in the Canadian Unitrade Specialized Catalogue of Canadian Stamps of $5,000; the faked stamp, estimated by Spink at $150 to $200, sold for $2,160.

A famous classic cover sent in 1853 from Sydney, Nova Scotia, to Madras, India, bears a pair of Nova Scotia 1-shilling dull violet stamps (sometimes called “cold violet,” Scott 7) and a 6-penny yellow green (4). The small envelope has a black border, indicating it was a mourning cover. As well as being well-preserved and rare, the cover is attractive: all the stamps have lovely margins and beautifully subtle colors.

It was once considered one of the gems of the famous Dale-Lichtenstein collection and is said to have been one of Bill Gross’ favorite British North America covers. It sold for $97,850.