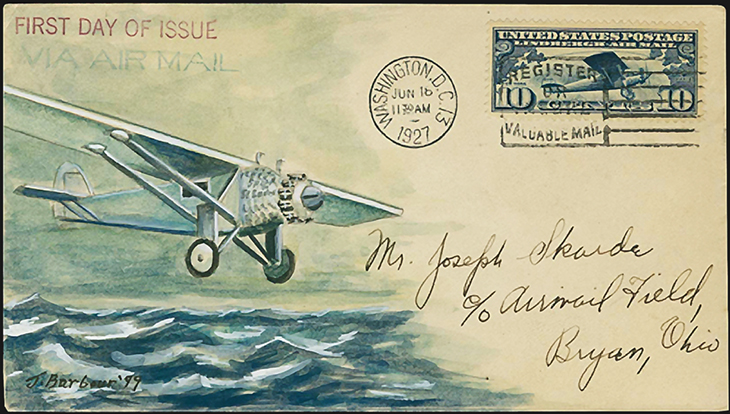 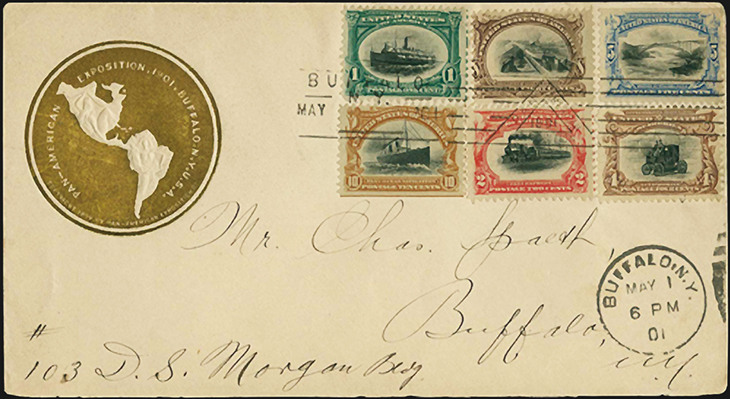 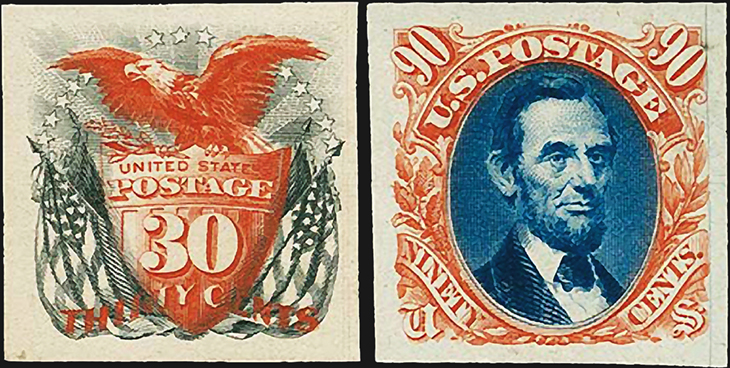 H.R. Harmer’s 75th anniversary sale in October included a set of the trial color proofs of the United States 1869 Pictorials prepared for the 1881 International Cotton Exposition in Atlanta. Two of the proofs are shown here; short one item, the set sold f
Previous
Next

A May 1, 1901, first-day cover of the U.S. Pan-American Exposition issue (Scott 294-299) bore a fabulous gold embossed cachet for the fair, depicting two allegorical figures nestling into the outlines of North and South America. Only 17 first-day covers with this complete set of six are recorded, and only a few of them have postmarks from the expo itself. Just one other Pan-American FDC has a cachet.

A machine-applied slogan cancel for the fair ties the stamps, with a Buffalo, N.Y., duplex cancel beside the address. The cover sold for $21,240, including the 18 percent buyer’s commission added by H.R. Harmer to all lots.

Among less pricey — but no less beautiful — FDCs in the sale was one with a handpainted cachet by J. Barbour showing the Spirit of St. Louis skimming the Atlantic waves. The June 18, 1927, cover with the 10¢ Lindbergh airmail commemorative (Scott C10) sold for $236.

Among a long run of U.S. proofs and essays was a set of the “Atlanta” trial color proofs of the 1869 Pictorials.

These imperforate reprints on thin card, in five different colors for the monochrome stamps and 10 to 14 different color combinations for each of the bicolor values (Scott 123TC4-132TC4), were prepared in 1881 for the International Cotton Exposition in Atlanta. Only 100 sets were printed, and few intact sets remain, according to Harmer. Lacking only the scarce 90¢ Lincoln with a green frame and black center, the set went for $17,110.

Among worldwide stamps, a never-hinged example of the famous Falkland Islands “wrong ship” error proved the enduring popularity of this Elizabethan-era error, in which a vignette of the HMS Glasgow was somehow printed within the 6-penny frame of a set commemorating the 50th anniversary of a World War I naval battle.

The 6d stamp normally shows the HMS Kent, while the Glasgow appears on the 2½d denomination.

The example in the Harmer sale, which had lain quietly in a collection since the early 1970s, sold for $41,300.