Rejoined Hawaii 13¢ Missionary pair hammered down for $54,625 at Siegel auction 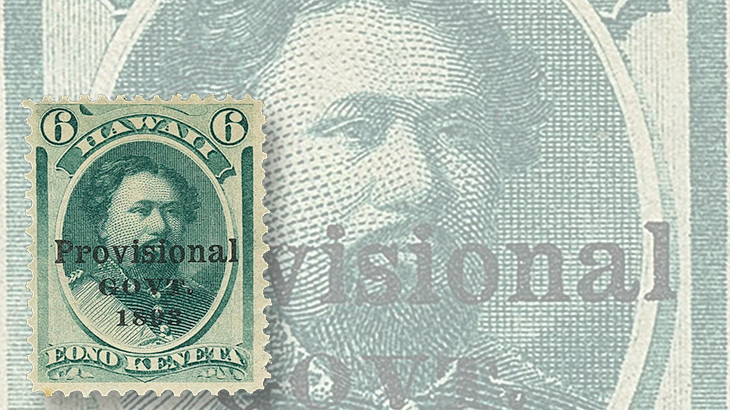 An unused 6¢ Hawaii stamp portraying King Kamehameha V, with a black overprint instead of red, brought $12,075 at the October Siegel sale. Only one sheet of 50 was printed. 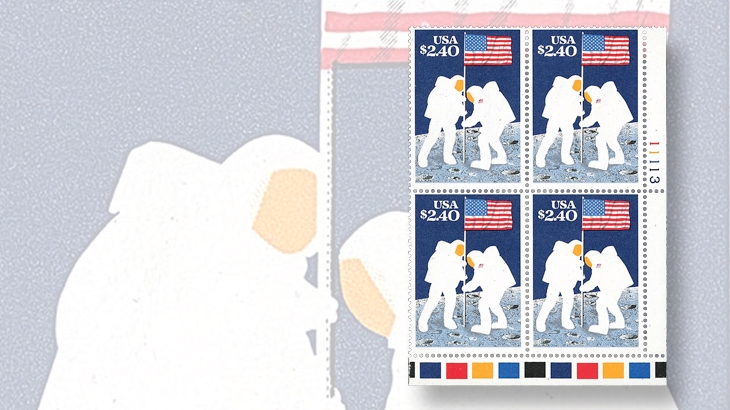 This modern error from the Siegel sale is a plate block of four 1989 Moon Landing stamps with the black intaglio printing absent. It sold for $4,312.50. 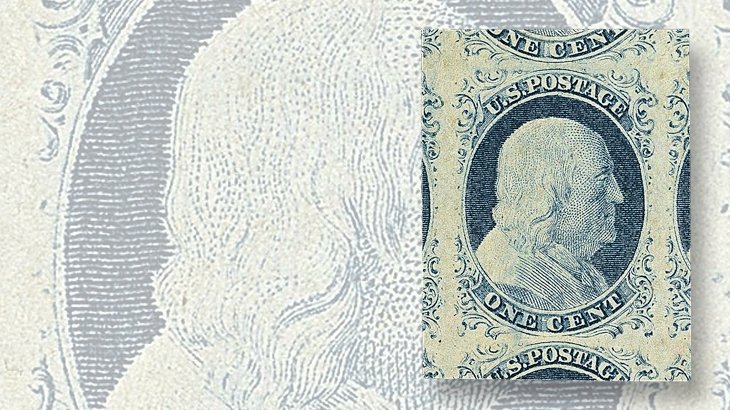 Highlights of the U.S. sale included a never-hinged 1851 1¢ Franklin, type IV (Scott 9), with margins so big they incorporated parts of all eight neighboring stamps.

Although a somewhat artificial creation — at some point in its history, the stamp was evidently clipped out of a mint block — it is nonetheless a rare item, as never-hinged blocks of Scott 9 are themselves not exactly abundant (and perhaps the other stamps in the old block were faulty in some way).

Dubbed “the essence of perfection” by the auction firm, the Scott 9 stamp sold for $26,450, including Siegel’s 15 percent buyer’s premium that is added to all lots.

A plate block of four of the $2.40 Moon Landing stamp of 1989 with the black intaglio color missing (Scott 2419a) was described by Siegel as “the first plate block we have encountered” of the error. The plate numbers for the offset colors appear on the upper-right margin selvage, while the lower-right margin selvage, where the black intaglio number should be, is blank.

Some 60 to 80 examples of the stamp are known, according to the Scott Catalogue of Errors on U.S. Postage Stamps, by Stephen R. Datz, which lists the plate block but does not price it.

Siegel’s Hawaii sale featured a number of the famous early Missionary stamps, including a pair of the 13¢ issue inscribed “H.I. & U.S. Postage” (Scott 4). The stamp was issued for letters from the islands to the mainland, and perhaps uniquely in world history, it prepaid the postage of three entities: 5¢ for Hawaii, 2¢ for the ship’s captain and 6¢ for the U.S. post office.

Like the 2¢ and 5¢ Hawaii Missionaries, the 13¢ stamps were printed in pairs, but with each stamp showing distinct quirks as a result of being composed from individual typesetting letters and ornaments. In the case of Scott 4, the stamp on the right (type II) is missing the dot after “U.”

Of all the Missionary stamps known, only two multiples survive: one in the Smithsonian’s National Postal Museum and the one offered in this sale by Siegel. This pair was at some point separated into two singles but later rejoined; a crisp, bold seven-barred circular cancel straddling them proves their status as rejoined twins. The pair sold for $54,625.

A single example of the 13¢ type II with a neat strike of a bold “8” in a circle sold for $46,000. The “8” was a handstamp used on incoming mail in San Francisco to show that the ship fee and the U.S. postage had been paid. It was usually struck on the covers, away from the franking; this is one of just two stamps known that show this handstamp.

A 5¢ Missionary with part of a “Honolulu/Aug.1…/U.S. Postage Paid” postmark in red is the only known example of this stamp showing a part of this particular marking.

Typically, 5¢ Hawaii Missionaries that have a red datestamp show one reading “Honolulu/Hawaiian Islands,” as the 5¢ did not go toward U.S. postage. Therefore, this stamp must have originally come from a cover that included other stamps paying the rest of the fee. It brought $34,500.

A 10¢ red-brown stamp showing King David Kalakaua was erroneously overprinted in red, rather than black (Scott 61B), with the words “Provisional Govt./1893.” The original-gum example in the Siegel sale went for $13,225.

An unused 6¢ stamp of the same series, showing King Kamehameha V, with a black overprint instead of red (Scott 66C), brought $12,075.

Only one sheet of 50 was produced of each error, although several examples of both were reportedly lost in the 1906 San Francisco earthquake.