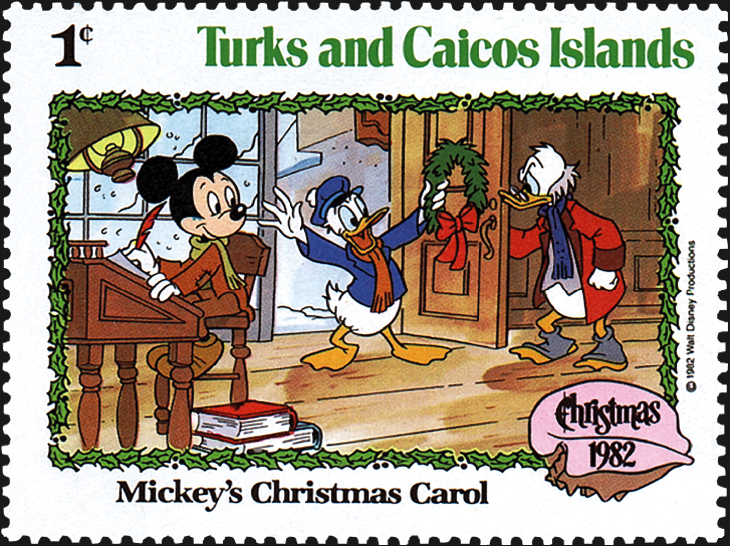 Dickens’ A Christmas Carol has been retold many times in a variety of ways, including Walt Disney’s Mickey’s Christmas Carol. On this Christmas stamp from the Turks and Caicos Islands, Mickey portrays Bob Cratchit. 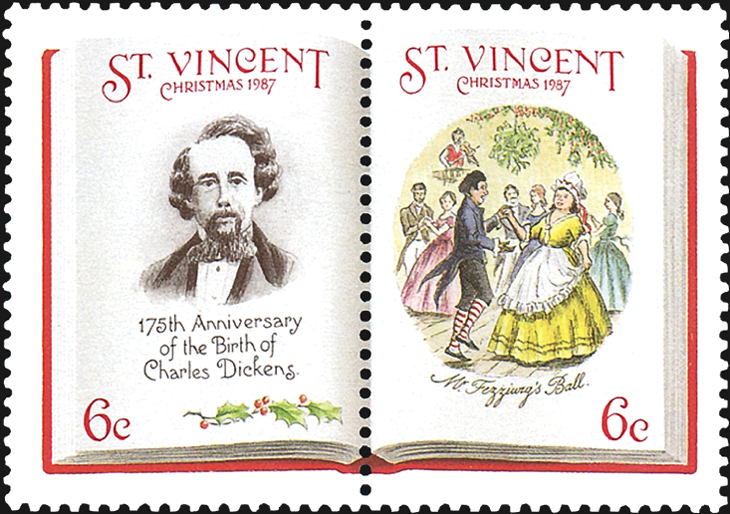 St. Vincent celebrated the 175th anniversary of Dicken’s birth on its 1987 Christmas stamps, printed in se-tenant pairs designed to look like open books. The illustration on the stamp on the right features Mr. Fessiwig’s ball. 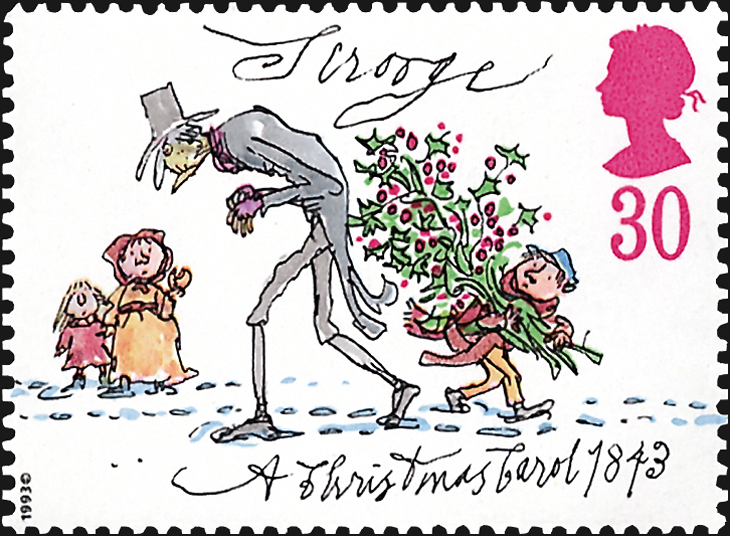 Great Britain’s 1993 Christmas stamps commemorated the 150th anniversary of A Christmas Carol by Charles Dickens. Scrooge is pictured on the 30-penny stamp. 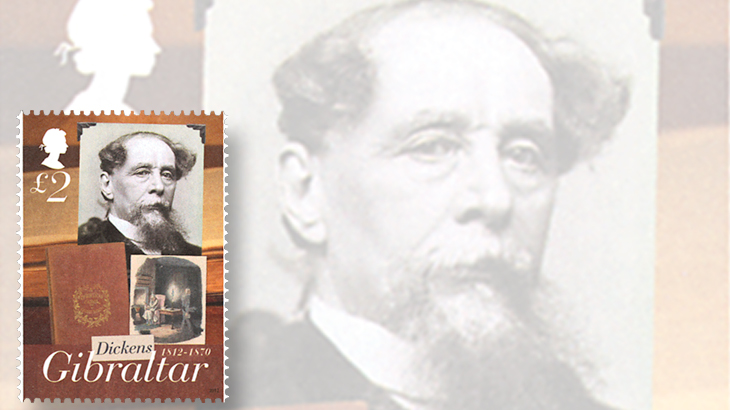 Several postal administrations issued stamps in 2012 to honor the 200th anniversary of Charles Dickens’ birth. This £2 stamp from Gibraltar shows the author and an illustration of Marley’s Ghost from A Christmas Carol. 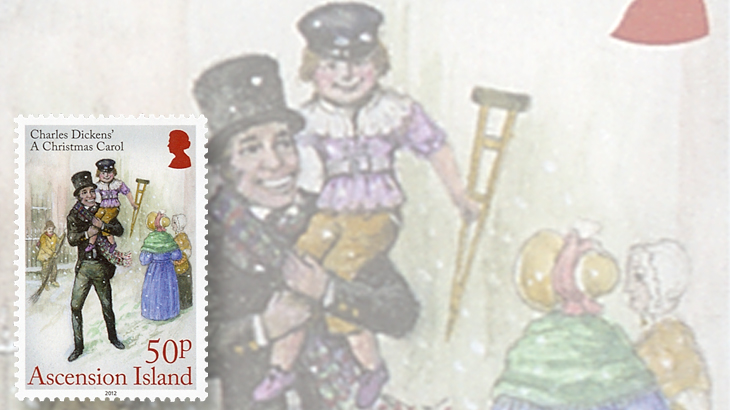 A Christmas stamp from Ascension Island pictures Tiny Tim being carried by Scrooge.
Previous
Next

A Christmas Carol by Charles Dickens was published Dec. 17, 1843, and in the 172 years since then the story has become a timeless classic, retold hundreds of times in a variety of films, television specials and plays, and faithfully read and re-read every year as part of many families’ holiday traditions.

Another way to enjoy A Christmas Carol is by forming a topical collection of stamps that picture the characters from this story of redemption.

Of course, Ebenezer Scrooge, the main character, is the most popular, included in the designs of many of the stamps that feature the short novel. He needs little introduction; in fact “scrooge” has become a word by itself, defined in Merriam-Webster’s Collegiate Dictionary as “a miserly person.”

In 1993, Great Britain’s Royal Mail dedicated its Christmas stamps to commemorating the 150th anniversary of A Christmas Carol. Quentin Blake, the illustrator known for his work with children’s author Roald Dahl, designed this set of five (Scott 1528-1532).

Many of major characters are featured in Blake’s designs, and Scrooge is shown on the 30-penny denomination (1530). He is pictured hunched over walking home from the counting house, not knowing what awaits him in his chambers that once belonged to his deceased business partner, Jacob Marley.

A stamp from Gibraltar continues the story, showing the illustration captioned “Marley’s Ghost” from the 1843 first edition of A Christmas Carol. The illustration is the work of caricaturist John Leech, who also drew cartoons for Punch magazine.

Dickens’ description of Marley in this scene reads: “… Marley in his pig-tail, usual waistcoat, tights and boots; the tassels on the latter bristling, like his pigtail, and his coat-skirts, and the hair upon his head. The chain he drew was clasped about his middle. It was long, and wound about him like a tail; and it was made (for Scrooge observed it closely) of cash-boxes, keys, padlocks, ledgers, deeds, and heavy purses wrought in steel. His body was transparent; so that Scrooge, observing him, and looking through his waistcoat, could see the two buttons on his coat behind.”

In addition to the scene of Marley’s Ghost, the design includes a photograph of Dickens and an illustration of the cover of the first edition. Dickens’ novels David Copperfield, Oliver Twist and A Tale of Two Cities are featured on other stamps in the set from Gibraltar (Scott 1347-1351).

Jersey was among the other postal administrations that honored Dickens with stamps during his birth bicentennial year. The eight Christmas stamps issued on Nov. 15, 2012 (Scott 1632-1639) depict many of the major characters, most notably the ghosts.

Dickens described the last of the spirits: “The Phantom slowly, gravely, silently approached. When it came, Scrooge bent down upon his knee; for in the very air through which this Spirit moved it seemed to scatter gloom and mystery.

“It was shrouded in a deep black garment, which concealed its head, its face, its form, and left nothing of it visible save one outstretched hand. But for this it would have been difficult to detach its figure from the night, and separate it from the darkness by which it was surrounded.”

In contrast to the eerie graveyard scene portrayed on this Jersey stamp is the cheery depiction of Mickey Mouse as Bob Cratchit on the 1¢ stamp in Turks and Caicos Islands’ 1982 Christmas issue featuring Walt Disney’s Mickey’s Christmas Carol (Scott 540-549).

Cratchit, the clerk who Scrooge begrudges giving Christmas Day off, is sitting at his desk. The design also depicts Scrooge McDuck as Scrooge and Donald Duck as Scrooge’s nephew Fred.

In 1987, St. Vincent marked the 175th anniversary of Dickens’ birth on its Christmas issue (Scott 1064-1065). The $5 stamp in the souvenir sheet pictures a woman reading the book out loud. The other designs were produced in se-tenant (side-by-side) pairs resembling the pages of an open book. The stamp on the left of each pair shows a portrait of the author, and a scene from A Christmas Carol is illustrated on the stamp on the right.

On the 6¢ pair, Scrooge’s first employer, Mr. Fezziwig, dances with his wife at their Christmas Eve ball.

No collection of A Christmas Carol on stamps would be complete without Tiny Tim, one of the six children of the Cratchit family. Despite poor health, described in the book as “ … he bore a little crutch, and had his limbs supported by an iron frame,” he remains in good spirit, wishing “God bless us everyone.”

The 50-penny stamp in the Ascension Island’s 2012 Christmas issue (Scott 1062-1065) shows Tiny Tim being carried on his father’s shoulder.

Many of the aforementioned stamp sets complete the story, showing Scrooge after his reformation. As Scrooge told the Ghost of Christmas Yet to Come, “I will honour Christmas in my heart, and try to keep it all the year. I will live in the Past, the Present, and the Future. The Spirits of all Three shall strive within me. I will not shut out the lessons that they teach!

Scrooge is shown carrying out his promise by ordering a turkey for the Cratchit family in the scene illustrated on the £1.25 high denomination in the Ascension Island set. Great Britain pictures this prize turkey on the 35p stamp in its 1993 Christmas issue.

Two stamps from Jersey capture Scrooge’s amazing overnight transformation. He is enjoying his Christmas dinner with Fred, his wife and friends on the 50p stamp, and dancing for joy on the 40p stamp inscribed “A Merry Christmas one and all!”