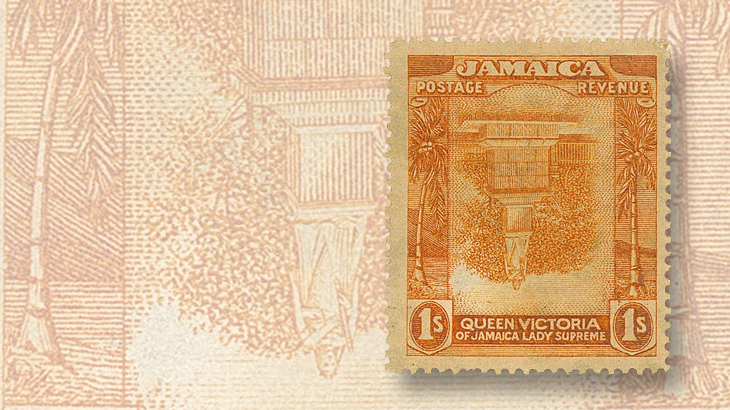 The Robert A. Siegel International sale Dec. 9-10 will offer worldwide stamps, including this rarity from Jamaica, the 1920 1-shilling Statue of Queen Victoria stamp with inverted frame.

Robert A. Siegel International, in association with Charles F. Shreve, is conducting an auction of worldwide stamps and postal history Dec. 9-10.

The auction is organized in two parts, beginning with the F. Christian Killien, M.D., collection on Wednesday. The three Thursday sessions consist of single stamps, sets, covers and collection lots from more than 50 additional consignors.

Not every stamp in the collection was a rarity, Shreve notes, but there are countless “condition rarities.”

The collection offers 785 lots, with much of the material from Great Britain, Canada and the British Commonwealth, but also featuring France and French colonies.

The auction offers a striking selection of the New Zealand Coat of Arms postal fiscals of the 1931-58 issues, with paper and watermark varieties meticulously identified for each stamp. Not often seen, these appealing stamps appear in the Scott Classic Specialized Catalogue of Stamps and Covers 1840-1940 and in Vol. 5 of the Scott Standard Postage Stamp Catalogue following New Zealand’s regular issues, with the prefix AR.

The Thursday sessions present additional worldwide material with a number of captivating rarities, such as the unused 1920 Jamaica 1-shilling bright orange and orange Statue of Queen Victoria stamp with frame inverted (Scott 83a). It is one of 60 printed on a full sheet, but no more than 20 examples are known today, either used or unused, according to Siegel. This unused stamp is described as extremely rare, with strong colors on slightly toned paper as usual, bearing original gum with hinge remnant, and a small surface rub at top right.

Full auction details and individual lots for the Dec. 9-10 sale can be viewed on the Robert A. Siegel website.