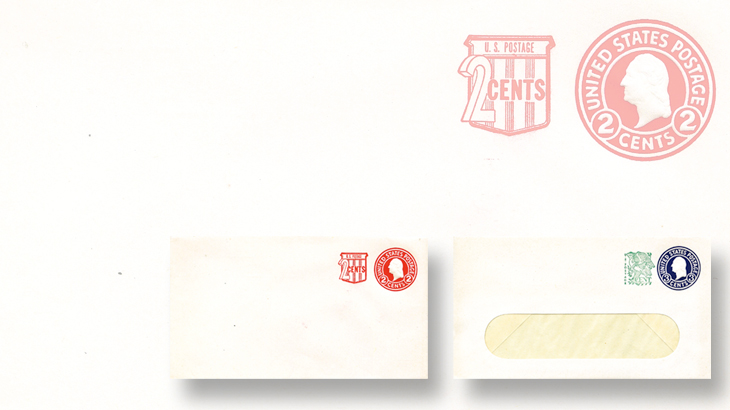 The new stamp is printed in red ink and is in the form of a circle about 11/16 inches in diameter. In the center is embossed the head of Washington in profile, looking to the left. The sides and upper portion of the border carry the words “United States Postage” in white capital letters, and within the border beneath the head is the word “cents.” with the numeral “2” on each side enclosed in a small white circle.

In effect, the U.S. Post Office Department had given postal stationery collectors a 1915 Christmas gift, but with a catch:

For awhile the Department cannot fill all requisitions with the new envelopes. The old embossing dies will be displaced with dies of the new design gradually, and until all of the stamping machines are equipped with the new dies, return-card envelopes with the old or the new stamp will be furnished in response to the requisitions of postmasters. Unprinted envelopes bearing the old stamp will be issued by the Department until the stock on hand is exhausted.

Nevertheless, the Jan. 15, 1916, issue of Mekeel’s Weekly Stamp News reported that the first of the new envelopes had been placed on sale Dec. 20: “This was size 5 on white,” meaning a letter-size envelope on white paper. For 25 years I have searched in vain for a carmine 2¢ George Washington Circular Die stamped envelope used in December 1915 or shortly afterward.

The earliest examples of Circular Die envelopes I have seen were both long legal-size envelopes with government-printed business corner cards, which the POD called “special request” envelopes, used in February 1916 — one example on white paper canceled Feb. 17, and one on amber paper canceled Feb. 18. The postmarked corner sections are pictured nearby.

Black 4¢ and blue 5¢ Washington envelopes were issued only on white, amber, and blue papers; the 4¢, only in legal size. The 4¢ was intended for double weight domestic letters; the 5¢, for surface letters to foreign countries.

When World War I added a 1¢ war tax to the domestic letter rate effective Nov. 2, 1917, dark violet 3¢ Washington envelopes were issued to meet that need.

When the domestic printed matter rate increased in 1925, brown 1½¢ Washington stamped envelopes were issued on white, amber, blue, and manila papers. (Oriental buff color had been withdrawn as a stamped envelope option in 1920.) The surface letter rate had reverted to 2¢ per ounce in 1919, but rose again to 3¢ in 1932. The subtly different color of the 3¢ Washington indicium on 1932 and later Circular Die envelopes is listed as purple in the Scott Specialized Catalogue of United States Stamps and Covers and Vol. 1 of the Scott Standard Postage Stamp Catalogue.

Also issued for the first time in 1932 were legal-size orange 6¢ Washington envelopes on white, amber, and blue papers to meet the second-ounce domestic rate.

Both standard- and extra-quality papers of differing weights and thicknesses were offered on the various denominations at different times. Because of the World War II emergency, use of colored paper ended in late 1943, and only 3¢ envelopes continued to be manufactured.

Each basic postal rate change left large quantities of envelopes in post office and customers’ inventories that were obsolete.

On July 1, 1919, the World War I war tax on first-class letters and cards ended. The domestic letter rate reverted to 2¢ per ounce, which rendered 3¢ stamped envelopes obsolete.

Members of the public were given one month to redeem 3¢ envelopes at full value, including the premium charged for envelopes and the added amount paid for government-printed special-request corner cards (but not the cost of privately printed advertisements and corner cards). Redemptions after July 1919 were credited only the postal value of the envelopes.

Meanwhile, postmasters were ordered to retain unsold stocks of the obsolete envelopes, and to report the quantities in inventory. In January 1920, with 169 million leftover 3¢ envelopes in inventory, “to conserve, during the prevailing condition of short paper production throughout the country, large quantities of paper which would otherwise be wasted,” the POD began revaluing them by adding 2¢ surcharge overprints.

On Jan. 31, 1920, the POD authorized postmasters to revalue envelopes in their local inventories “by running them through cancelling machines equipped with special dies bearing the numeral ‘2’ in place of the regular postmarking-canceling dies … with either black or red ink.” Dies were supplied by headquarters in several styles, and some nonstandard dies were obtained from local suppliers.

Surcharging continued for almost two years, until the end of 1921, because the 2¢ dies were passed from one post office to another. Philadelphia dealer and writer Philip H. Ward Jr. estimated that a complete collection of overprint types, envelope sizes, watermarks, and colors would add up to about 2,500 different entires.

Inevitably, both by mistake and intentionally, some offices surcharged envelopes of the wrong denominations and of earlier series, many of which are catalog-listed. Some albino error envelopes exist with surcharges; some envelopes were surcharged more than once.

After the single-piece third-class rate increased to 1½¢ for two ounces of printed matter on April 15, 1925, 1¢ Franklin Circular Die envelopes in post office inventories were revalued to 1½¢ by the same method.

Congress first authorized the POD to precancel stamped envelopes in 1925, but Ward had reported three examples five years before that. In the March 20, 1920, Mekeel’s, “Mr. H.W. Boers sends for our inspection an oddity in the way of what seems to be a precancel. It is the 1c green oval die envelope precanceled with a fancy scroll design.” In the Dec. 18-25 issue, “the current [Circular Die] 1c and 2c envelopes precanceled in black, between two horizontal lines, ‘Carolton’.”

Nevertheless, a practical need for precanceled stamped envelopes arose only after the adoption of a bulk-rate subclass of third-class mail for at least 200 identical pieces of printed matter in 1928.

Although bulk postage by definition was rated according to the aggregate weight of a mailing, the minimum amount was 1¢ per piece. Precanceled 1¢ Franklin Circular Die stamped envelopes, the first to be overprinted by the envelope manufacturer, became convenient for such mailings. The illustrated example, endorsed “Sec. 435½ P.L.&R.,” obeyed the regulation.

Other overprinted and surcharged Circular Die envelopes included 2¢ Washington envelopes with “AIR 6¢ MAIL” surcharges, issued in 1945 for use by members of the armed forces overseas at the World War II concessionary airmail letter rate, and “POST OFFICE DEPARTMENT PENALTY FOR PRIVATE USE TO AVOID PAYMENT OF POSTAGE $300 OFFICIAL BUSINESS” overprints that demonetized obsolete denominations for official use by the POD itself.

Stamped envelopes offer opportunities for collectors that are not available to specialists who study only adhesive stamps, because until 1938 private courier services and express companies that carried letters out of the mails were required to enclose them in sealed, dated, canceled stamped envelopes.

I also enjoy unusual and offbeat uses. Two are pictured here. One is a 3¢ Washington office request envelope that was carried on Keyser, W.Va., rural route No. 4 from one resident on the carrier’s trip to another resident farther along the same route, canceled only with the carrier’s stamp “MAILED ON RURAL ROUTE.” Only the 1933 date in the watermark monogram offers a clue to the approximate date it was sent.

Advertising collars that surrounded postal stationery envelope stamps on 19th-century U.S. government envelopes made for interesting decorative elements until the POD banned them, so they are rarely seen on Circular Die envelopes. I have seen only two, one of which is illustrated — a privately printed propaganda slogan, “KEEP UNITED STATES OUT OF WAR – BE NEUTRAL,” surrounding a 2¢ Washington stamp indicium on a cover mailed Sept. 28, 1939, to a local address at Flushing, N.Y.

By the mid-1930s, collectors had become bored with Circular Die envelopes. In an article titled “Pity The Envelope Collector” in the April 16, 1934, Mekeel’s, Thomas Doane Perry wrote:

Some sympathetic and aggressive stamp journal ought to take up the pitiable case of the envelope collector, who has recently attained his majority, and has never been aware of any current envelope issue but the age old Circular Dies. A few short-lived commemoratives are the only exception. Even hardened veterans in the envelope collecting field have grown weary of this series that has served valiantly for almost twenty years.

On February 25, 1935, Perry’s local Southern Indiana Stamp Club at New Albany adopted a resolution that called on the POD “to provide, as soon as reasonably possible, a new series of stamped envelope dies, either depicting patriotic emblems, or symbolizing some event of national interest.”

Seven years later, Perry and his club almost had their wish granted for a new envelope series. An article in the Jan. 25, 1942, New York Times by Kent B. Stiles predicted, “Designs in Use Since ’16 To Be Replaced by Modern Series”:

Release of the first units in the long-promised series of embossed stamped envelopes is expected to begin some time in February. … Illustrations of the designs will be made available by the Postoffice Department within a fortnight. … The newcomers for regular postage will replace a series that has been in circulation since 1916. Collectors believe that because of the altered designs they will stimulate fresh interest in envelope collecting.

It was a false alarm. No doubt Stiles’ “authoritative source” had been sincere, but by the time his article appeared in print, the United States was at war and the POD had no time or spare resources to retool.

It is an interesting speculation whether new envelope dies will be substituted for the 33 year old Circular Dies. Collectors point out that a complete series of new dies were prepared in 1941 … but have never been used. The design of these dies is a solid block type in erect oval format, withal a bit modernistic and quite a departure from the conventional. Some like the design and some don’t. They are, however, well adapted to the embossing-printing process.

Thorp continued to beat his drum. In April, “horse cars were still running on Chamber St., N.Y., when the Circular Die was introduced.” His May issue reported a petition to Congress from the Wichita Stamp Club to replace “the monotony of the circular design.” The June-July issue lamented that perhaps the Circular Die “will remain with us forever.” In his August-September issue, Thorp yawned, “Yes, one of these days the Post Office Department must get around to changing the design of the present Circular Die.”

Finally the top of the January 1950 front page heralded good news: “NEW ENVELOPE STAMPS TO BE ISSUED”: “The designs to be used will probably be those which were prepared some years ago.” Indeed they were, but 10 more months passed before the Oval Die issue of 1950 made its appearance in New York at the National Postage Stamp Show. International Envelope Co., the POD’s contractor, actually printed the new 3¢ envelopes at the exhibition.

But Circular Dies still had an encore to perform.

Last of the Circular Dies

Surcharged 2¢-on-2¢ and 1¢-on-3¢ Washington envelopes, issued in 1958 to meet the new 4¢ per ounce domestic letter rate, finally closed out the series.

The rate was effective Aug. 1. On July 3 the POD had announced that surplus stocks of the old envelopes would be revalued at regional distribution offices, and ordered postmasters to sell revalued envelopes before placing new 4¢ envelopes on sale.

The late postal stationery expert William Maisel owned a 2¢-on-2¢ Circular Die envelope canceled Aug. 27, 1958, at Leesburg, Fla., the earliest-documented use of that surcharged envelope. I have no report of a 1¢-on-3¢ envelope used in 1958, but they ought to exist in some readers’ collections.

Those were the last Circular Die stamped envelopes to be issued, 42 years after the series began. Some were still being used in the 1960s.