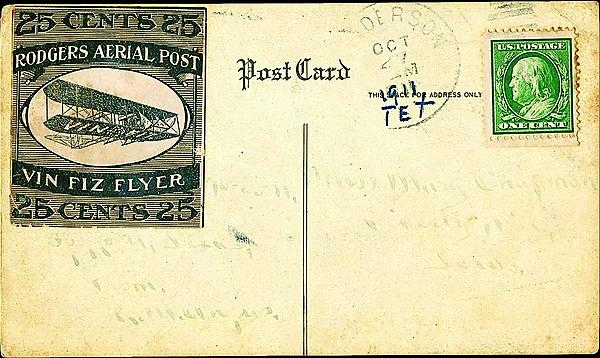 A newly discovered postcard franked in part by a Vin Fiz semi-official airmail stamp from 1911 was auctioned by Spink USA in November in New York City for $28,850. 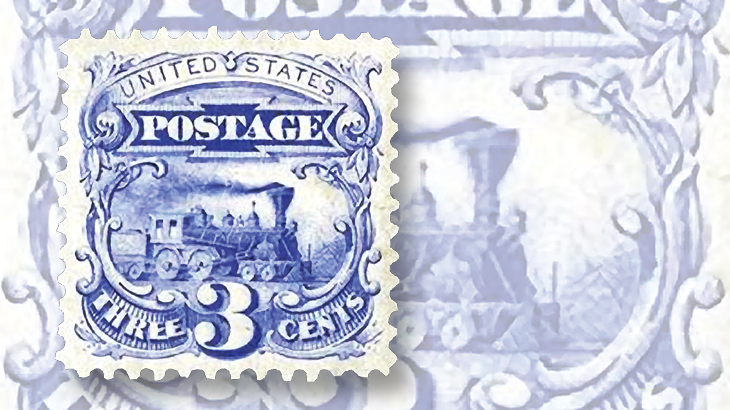 At its November sale in New York, Spink USA offered a near-perfect example of the scarce 1875 reissue of the 3¢ Locomotive stamp from the 1869 pictorial series. It sold for $24,250.
Previous
Next

Late fall is not just peak season for bright, autumnal foliage but also for stamp auctions, and collectors found plenty of rare and beautiful items to admire in the last few months of 2015.

The item that garnered the most attention was a newly discovered on-cover example of the 1911 25¢ air post semi-official stamp depicting the experimental Rodgers Aerial Post Vin Fiz Flyer (Scott CL2), the first postal adhesive in the world to depict an airplane.

An image and description of the cover filled most of the front page of the Nov. 9, 2015, issue of Linn’s.

Just eight on-cover examples of the Vin Fiz stamp were known until this one surfaced, with four more known off-cover.

The newest addition to the canon is a picture postcard depicting the plane and its pilot, with the stamp on the left of the message side and a 1¢ Franklin postage stamp (Scott 374) on the right, tied by a faint Anderson, Texas, duplex cancel of Oct. 27, 1911.

The cover was certified as genuine by the Philatelic Foundation earlier last year.

The Collectors Series sale was preceded on Nov. 18 by the Charles W. Adams collection of United States and Canada, which included many of the rarities he favored, often in pairs and multiples.

The U.S. selections included exceptional classics, such as a near-perfect example of the scarce 1875 reissue of the 3¢ Locomotive stamp from the 1869 pictorial series (Scott 125).

Only 1,406 of these stamps were sold at the time of their issue, and many of those were likely used on mail and lost. With a Professional Stamp Experts grade of extremely fine-superb 95, the mint example in the Adams collection is clearly the finest known. It sold for $24,250.

Highlights of the Canada material in the Adams and Fall Collector’s Series sales are described in the International Pavilion section elsewhere in this issue of Linn’s.