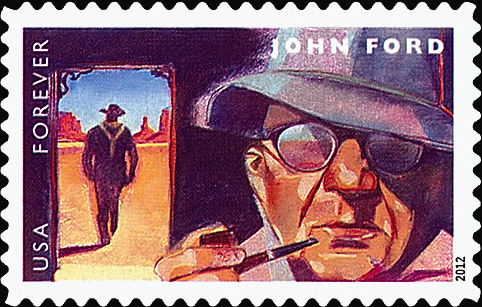 Film director John Ford, born Feb. 1, 1894, in Cape Elizabeth, Maine, was honored on a forever stamp issued May 23, 2012 (Scott 4668). The stamp is from a set of four commemorating prominent film directors: the others featured Frank Capra, Billy Wilder and John Huston.

Ford is best known, perhaps, for the Westerns he directed during his more than 50-year career. The stamp honoring him not only includes a portrait of the director; it also shows a scene from one of these classics, the 1956 film The Searchers, starring John Wayne.

On the left side of the stamp, Wayne is shown from behind, framed in an open doorway, walking away, as he appears at the end of the movie.

Printed on the back of the pane of 20 Great Film Directors stamps is a paragraph about Ford.

"'Men to match my mountains.' These famous words might also describe the characters depicted by John Ford (1894-1973). His tales of the American West and its larger-than-life heroes reflect our most fiercely held belief in individual freedom and the effect of the land on our psyche. Dwarfed by vast spaces, Ford’s characters are caught in the struggle between order and lawlessness in Stagecoach (1939) and The Searchers (1956) or against crushing poverty in his classic, The Grapes of Wrath (1940)."