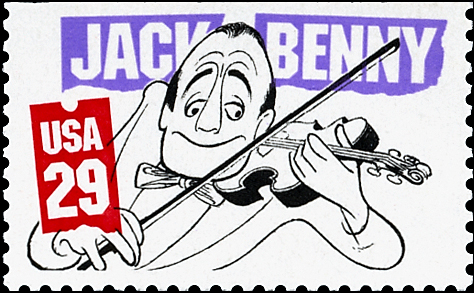 Comedian Jack Benny, born Benjamin Kubelsky on Feb. 14, 1894, began his entertainment career playing the violin, but he soon revealed a gift for comedy that brought him even greater success.

His vaudeville performances and self-deprecating humor led to national fame and appearances at hotels and clubs across the country. In 1932 Benny was a guest on Ed Sullivan’s radio program; it's been widely reported that his first words on the air were: "Ladies and gentlemen, this is Jack Benny talking. There will be a slight pause while you say, 'Who cares?'"

Benny's success led to his own radio programs, and developing a group of supporting actors that included his wife Sadye Marks (known as Mary Livingstone), Eddie Anderson as Rochester Van Jones, voice artist Mel Blanc and announcer Don Wilson. Benny would eventually star in his own long-running television program, make many TV guest appearances and take on comedic film roles.